The rise of the AFL prototype player

I look at the Scrabble board. To put it mildly, I’m in a bit of a pickle.

The letters I have aren’t particularly helpful, a combination of Zs and Xs that make me want to yell a bunch of Fs.

I still have one more letter to pull out of the bag, though. Out it comes, and out comes a sigh of relief, because it’ll all be OK now.

Nestled between my thumb and index finger is a blank tile.

It can go anywhere, be anything, and do the job (for the most part) just as effectively.

Such is the appeal of the utility or, to put it into contemporary AFL terminology, ‘the prototype player’.

When Jason Holmes runs out for St Kilda tonight, he’ll be the first American-born-and-bred person to play in the AFL.

But he certainly won’t be the first of his kind.

Indeed, it can be argued Matthew Pavlich (and Anthony Koutoufides before him) provided the first glimpse of what a prototype player is capable of. Selected as a key forward in the 1999 National Draft, Pavlich has been named All Australian six times in five different positions.

Take 12 kilograms and 20 centimetres off Pavlich and you’ll get his headband-sporting teammate, Nat Fyfe. His body type represents the future of Australian Rules. He’s 88 kilograms, 6”2, and on track to win a Brownlow Medal as a midfielder in 2015. However, perhaps as a piece of poetic justice, Fyfe could take Pavlich’s spot up forward this week as the Fremantle skipper misses with achilles soreness.

The most daunting thing about these players, and a key reason for their increasing demand, is they don’t appear to have any discernible weaknesses.

Fyfe’s kicking efficiency has been a point of contention, but it’s something that he has the power to rectify himself, not something able to be continually exploited by the opposition until the end of his career. A player like Ben Cousins may’ve had more running power, but at 5”8 and 10kg lighter than Fyfe he was able to be held in traffic and denied (though certainly not all the time) his bursting ability.

Cousins playing the role of a key forward would have several coaches smirking, but Fyfe’s body-type has those same coaches sweating.

Speaking of coaches sweating, there’s perhaps no greater task (or should I say hurdle) in the competition right now than matching up on Mark Blicavs, perhaps the ultimate blank tile. This is a player who, in 2012, was a steeplechaser who hadn’t played Australian rules football since he was 14.

He finished 2012 having played four games in the VFL, then committed to learning the ways of the game over the off-season.

He debuted the year after, and has now played over 50 games of Aussie Rules. In this time, he has been a ruckman, midfielder, forward, wingman, and gathered 27 touches in Round 6 playing against one of the game’s best in Scott Pendlebury.

Once on the fringes of the AFL, the prototype player is now squarely in its centre, their attributes and potential showcasing the future of the game.

Jason Holmes will not set the world alight against Geelong on Saturday night. But his flame will flicker. And, as he gathers a better understanding of the game he plays and the players he plays it with, he’ll become one of a horde of blank tiles that look destined to take over the board that is the AFL. 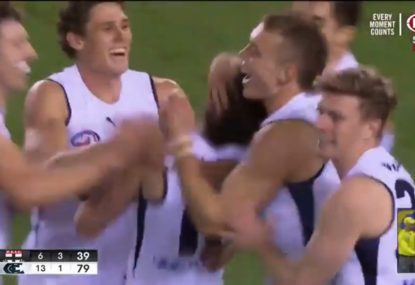 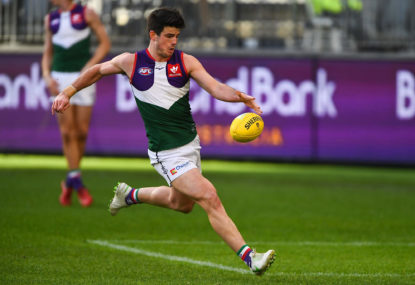 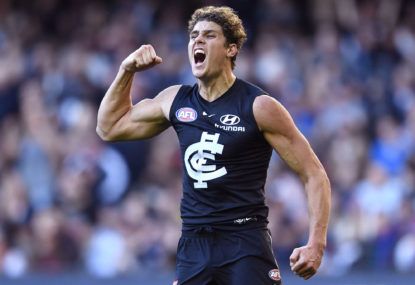