Essendon’s Orazio Fantasia is the poor sap nominated as the Round 23 Rising Star. While he can hold on to that forever, it’s not going to matter in the scheme of the overall award. That one is a race of two, and has been for almost six months.

For nine of the past 10 years, the AFL Rising Star has been a midfielder’s award.

Since its inception in 1993, midfielders have won the award 16 of a possible 22 times, with three forwards, two defenders, and Adam Goodes, who I guess you could call a ruck-rover at that time, taking home the prize.

For the most part, the selection panel have got it right, with almost every player that has been graced with the award having long, fulfilling careers. Brownlow Medals and premierships abound when you look through the list of past winners.

This season has thrown up its fair share of forwards for nomination, with four emerging goal-kickers scoring a round win in 2015. Two defenders made the grade, with the balance made up by a very good group of midfield prospects.

But for 21 of the 23 nominees, all they can hope for is a few encouragement votes from the selection panel.

Carlton’s Patrick Cripps and Melbourne’s Jesse Hogan are the clear stand-outs from a crop of genuine rising stars, and either of them would make for a worthy winner.

The award will be presented on Wednesday, and at this stage the betting markets have Cripps as a 3/2 favourite, ahead of Hogan at 5/2 and Isaac Heeney at 34/1. So the market is pretty certain that it’s a two-horse race.

With that in mind, is it all about the in-and-under gun Cripps? Or does Hollywood Hogan have a chance? Let’s take a look.

Some particulars
The Rising Star is voted on by a panel of 10 AFL people – three from the executive and seven ex-players – who all independently vote for five players on a sliding scale, awarding one player five points, one player four points, and so on. It follows that the most number of votes a player can receive is 50 points, while the least is zero. It’s not clear whether there are any set criteria that the panel vote on, suggesting it is a largely subjective process.

In the past 10 years, nine of the eventual winners have received at least 43 votes, indicating a near-unanimous selection of the winner. Brisbane’s Lewis Taylor won last year’s award with 39 votes, narrowly edging out Western Bulldogs monster Marcus Bontempelli, who received 38.

An interesting little wrinkle is who is on the selection panel. On the executive side are Gil McLachlan, Mark Evans and Kevin Sheehan, while on the players side are Kevin Bartlett, Luke Darcy, Danny Frawley, Glen Jakovich, Cameron Ling, Matthew Richardson and Warren Tredrea. That’s a lot of key position players.

Given the panel have been presented with a viable key-position candidate, could the votes unconsciously swing in that direction? Daniel Talia, a genuine full back, won the award in 2012 with 43 votes, in a year with a number of very good midfield candidates.

We’ve seen this before
I spent a bit of time talking about Jesse Hogan a few weeks ago, centred on his ridiculous outperformance compared to recent AFL key forwards in their first 20-odd games.

This is crucial in the context of the Rising Star award, given a number of key forwards have been nominated for the award over the years, including Nick Riewoldt, who didn’t fare particularly well on the Hogan Zone chart (reprised below): 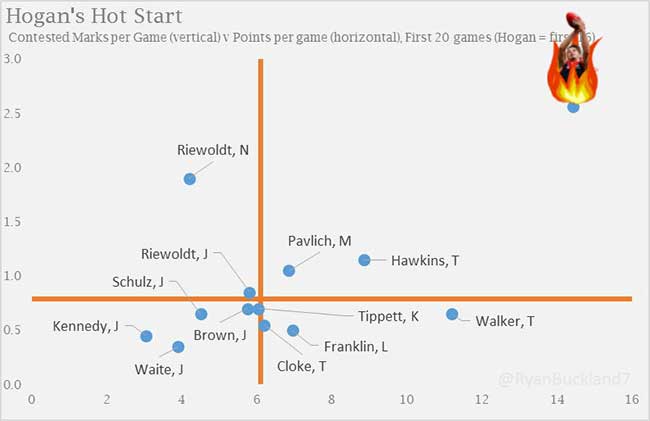 Riewoldt was one of only two players to fall in the top-left quadrant of the chart, suggesting he took more contested marks than his contemporaries, but had a lesser impact on the scoreboard.

Hogan, on the other hand, is that crazy blue dot out to the far right. Sure, he’s one of three players that falls in that quadrant, but look how far away he is from the average.

Other 2002 nominees include luminaries such as Luke Hodge, Jimmy Bartel, Alan Didak and Shaun Burgoyne. It also included some absolute flameouts, which I won’t name here, but head over to the Wikipedia page if you’re up for a chortle. They aren’t the ones I want to focus on, though.

In 2002, in his first game of AFL football, West Coast’s Chris Judd was nominated for the Rising Star award. Judd had 18 possessions, 12 of them contested, and five clearances as an 18-year-old. His debut season for West Coast was spectacular given his size, averaging eight contested possessions, four inside 50s, and nearly a goal a game – and, guys, he was 18 years old.

Does that sound familiar? Very familiar I say.

But Judd didn’t win it. In fact Riewoldt won the 2002 Rising Star award in a near-unanimous decision of the then-seven-member selection panel, 34-29.

That must give the Hogan camp some credits.

Not so fast…
But believe it or not, Patrick Cripps has had a better season than Hogan from a strictly numerical perspective.

The Blues’ next great hope has played 19 of a possible 21 games, and has been a constant feature in the side since Round 8. Where Hogan has outperformed all reasonable expectations of a first-year key forward, Cripps has set the bar for what a first year in-and-under player can achieve.

In the game that resulted in his nomination for the award, Cripps had 23 contested possessions, which is more than many of his contemporaries can hope to amass in the course of three or four games. He’s won the ball in the contest at least 10 times in 17 of those 19 games. One failure to reach double digits came in his first game of the season, and his second due to a rolled ankle limiting him to 69 per cent of game time (and he still had nine).

Cripps ended the 2015 season in eighth place on the contested possession tally across the whole league. The players above him include some guys you might have heard of: Josh Kennedy, Nat Fyfe, Matt Priddis, Patrick Dangerfield, Ben Cunnington, Robbie Gray and David Mundy. He has had more contested possessions than everyone in the league that is not on that list. If you’re going to beat the whole league exclusive some people, that’s a pretty good list of people to not beat.

Now his outperformance is a little more tricky to put down on a fancy-looking matrix than Hogan, mostly because there are far more champion inside midfielders going around. But you know what there isn’t a whole heap of? Rising Star-winning midfielders!

For the sake of a reasonably fair comparison, let’s limit this to winners from 2000 onwards. The game changes year-to-year, let alone over a 15 or 20 year period, and the growth in midfield stocks across the playing 22 makes this a bit of an odd comparison to make. But let’s do it anyway, because it’s fun to put dots on a matrix. 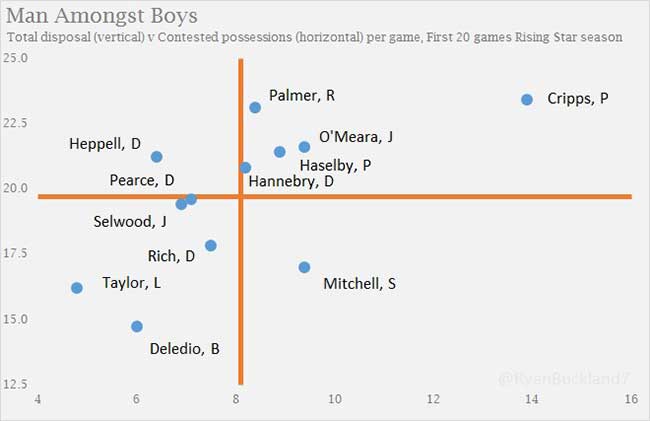 Well then, it seems we have two stellar out-performers to choose from this season. Cripps has averaged more disposals per game than any of his midfield contemporaries to win the award, and is streets ahead on contested possession victories than his next closest rivals in Sam Mitchel and Jaeger O’Meara.

But could someone else steal it?
Probably not.

Hogan and Cripps’ biggest competitor would be Isaac Heeney, but his problem is lack of playing time. The Sydney gun has only suited up for 11 games, and strictly speaking his output hasn’t been at the same level of the two favourites. There’s a strong argument to be made that he’ll be the best of the three over the course of the next decade, but for this season at least, Heeney will have to settle for third place.

And unfortunately for Heeney, he’s played more than 10 games, which knocks him out of contention for the 2016 award.

Angus Brayshaw looks the goods, and is ready to explode. But his unfortunate condition – playing in a Paul Roos-coached midfield – has restricted his output to a level that has him a peg or two below the others.

Touk Miller has had the best second half of this year’s crop, but can you remember him playing at all in the first half of the season? Adam Saad is the same, but with the order of play reversed. Kamdyn McIntosh has come from the clouds (aka Pinjarra, Western Australia), but hasn’t had a season full of flair, the kind that the Rising Star award seems to demand.

But that doesn’t diminish the collective impressiveness of this group – when you go down the list, this season’s line up bats incredibly deep. Indeed, if one or two more defenders had been picked, this would be a pretty decent football team with a couple more years of growth and development.

This makes the race for the top prize all the more fascinating. Cripps and Hogan will command fours and fives from the panel – all it could take to knock one of the two out would be for a handful of panellists to be enamoured in one of the other worthy-but-not-worthy candidates to skew the allocation of the top votes. Equally, this could make the count much closer, and keep the win total below 40 votes as happened in 2014.

Make a pick, dammit!
There are a total of 150 votes to be allocated across these 23 players. While we’ve established that Cripps and Hogan are the standouts, arguably commanding the suite of fours and fives, there are enough curveballs that could be thrown to really shake this competition up.

But if I had to make a call? Patrick Cripps will win the 2015 AFL Rising Star award.

Cripps has had a remarkable season for a 19-year-old, carrying the load that his team’s crumbling playing stocks dumped on him in a way we haven’t seen in a Rising Star winner to date. That makes him favourite to me, and is likely the driver behind his market favouritism, too.

There is something magical about Jesse Hogan. He has shouldered a similar burden for Melbourne, coming into a team that boasts a key forward set-up that would have otherwise made you wonder if Melbourne’s administration had been playing fantasy footy, and invested a little too much in other areas of the ground.

In a subjective award such as this, how much does the spectre of a readymade 20-year-old, high marking, goal-kicking key position player influence the call of the judging panel? I think a lot, but not enough to get Hogan over the line.

Cripps will be a lock for four or five votes from each of the panellists, while some of the group will feel it fit to give fours to Sydney’s Isaac Heeney, given what he’s shown. Hogan’s votes will suffer in that scenario – no one could entertain giving Cripps anything less than a four given the year he has had. It’s a midfielders award, remember?

In either case, both of these players represent the future of their respective clubs. And isn’t that what we should be getting excited about?