As is the modern way, cauldrons hosting this weekend’s finals are poised to explode in pre-match balls of fire to the rumble of Led Zeppelin’s Kashmir as league welcomes the business end.

For the players and fans involved it’s a moment of relief and intense desire knowing the ultimate prize lies within agonising reach. As a Manly fan still deciphering my own club’s demise, the moment will be filled with emptiness tempered by reflections of a miraculous decade.

Self-wallowing aside, the brutal journey that is finals football is compulsive viewing irrespective of the combatants. Once the initial mid-field sweat and dribble evaporates my focus switches to the match winning exploits of the competition’s top try sneaks.

If ever a finals wildcard system was needed, it’s now. Even a September 1 transfer deadline! Anything to see the smiling Fijian bring his 1.3 tries per outing to the big stage.

Never has a player in the last 30 years topped the charts with such an outlandish strike rate. Big Semi smashed down a club record 24 tries for the Eels in only 18 appearances. A mid-season injury robbed the likeable flyer of the chance to pass 30 – last achieved by Newtown’s Ray Preston way back in 1954.

Since debuting in 2013, Radradra’s strike rate has increased annually and his tally now stands at 48 touchdowns from only 49 matches.

Such sustained try scoring prowess hasn’t been seen since last century when the Dragons Nathan Blacklock thrilled crowds with post-try backflips at his peak. Across four seasons from 1998, Blacklock racked up 97 tries in 102 outings.

Can you believe the Radradra/Jarryd Hayne combination never played finals – sharpen your cleats and buff your helmets Eels front desk, what next – Semi slugging for the New York Yankees?

Wooden bats aside, who else from the sides remaining delivers with the regularity of Semi Radradra?

No one, but Radradra’s 2015 bridesmaid Curtis Rona comes close.

Unheard of two years ago, the Bulldogs winger has sped up the try scoring charts mastering corner-post contortion along the way in posting 28 tries from just 30 career games.

Rona’s uncanny ability to dot-down while straddling the boundary fence is a clear advantage for Des Hasler in the sudden death environment of scrambling defence and could prove pivotal once they pass a contented St George Illawarra.

Elsewhere, the other leading four-point merchants have struck with far less consistency.

Wingers Alex Johnston and Valentine Holmes recent strike rates are a microcosm of the clubs they represent. Johnston’s strike rate over the last half of the season has fallen to a career low 0.63 reflective of Souths’ form slump and plummeting confidence.

In any case, I can’t see the Storm denying the Roosters a 13th straight victory.

The Bondi crew simply field too many strike weapons aided by Daniel Tupou’s return to form. The high flying winger’s impressive Round 25 hat-trick elevated him to sixth place on the NRL’s list.

Up north and Wayne Bennett is faced with an oversupply of backline strike power.

So much so, the cagey veteran has the luxury of ignoring winger Lachlan Maranta’s 15 season tries – equal 10th in the NRL – instead opting for the skills of Jordan Kahu.

And although the Cowboys are flushed with point scoring options themselves, I sense their at times fragile defence will be exposed by the home side’s raw power before a frothing Suncorp Stadium.

But back to our man in the stands and it’s clear all’s not lost for Semi ‘Run Harderer’ Radradra.

Demand for his services will escalate with each botched backline raid translating to healthy news for his hip pockets and hopefully a place on the park in future finals series. 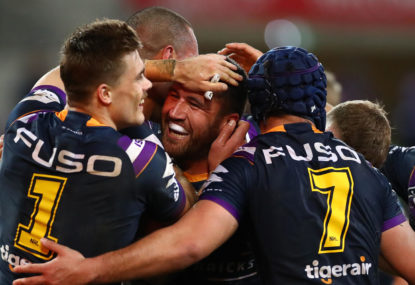 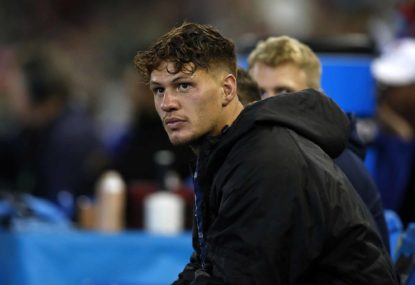 Peaceful Parramatta meditating their way to the premiership

It boasts LeBron James’ playbook for mental fitness, Shakespeare audibles and voiceovers of Matthew McConaughey discussing the mysteries of the universe.

Peaceful Parramatta meditating their way to the premiership