The movement for positivity launched in the run-up to the Rugby World Cup by our fair editor was good to be part of, was great fun, and generally speaking was received and consumed with the right intent.

And that got me thinking, that in the lead-up to England-Australia on Sunday morning, it’s time to kickoff another movement for positivity. And sure, there’s an ulterior motive at play here, but let’s not concern ourselves with such triviality.

One of the great advancements in rugby coverage in recent years has been the addition of the overhead ‘spidercam’ pointing directly down at the scrum set piece about to pack. The overhead angle shows all that is great about the rugby union scrum.

We can see the concerted efforts of eight-man scrummaging units, and similarly, we can see the clear and obvious illegalities employed by packs trying to gain an advantage by whatever means.

It made for particularly interesting viewing on the weekend, when the overhead shot showed precisely what English loosehead Joe Marler was up to – and his liberal interpretation of what constitutes packing straight – against Wales at Twickenham.

Former top referee, Jonathan Kaplan, took to Twitter, as he is wont these days, and was subtle as ever.

He kind of had a point… 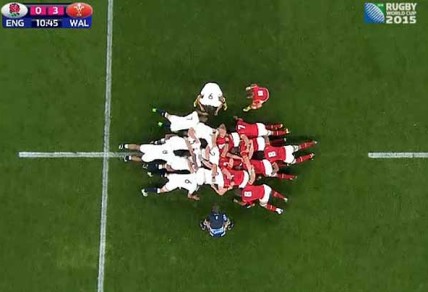 Former expert colleague Paul Cully picked up on it, too, writing in the Fairfax Media press on Sunday.

“As England won three early scrum penalties, it showed the same thing: England captain Chris Robshaw hanging off the side of the scrum to generate the angle to push his loose-head Joe Marler across the tight-head. In fact, the third of those scrums went sideways, not forwards, yet referee Jerome Garces ruled that England has achieved dominance.”

And the point about Robshaw is very valid, too. You can see it in the still above, that Robshaw isn’t actually bound to his lock, but rather to Marler’s backside, as they both angle outwards so as to bore in on Welsh tighthead Tomas Francis.

Cully finished up his point on England’s scrummaging shenanigans with, “Over to you Romain Poite.”

The Daily Telegraph in London picked up Kaplan’s tweets too, and certainly, the general awareness of how England achieved much of their early scrum success against Wales has increased. Heading into what is now a blockbuster Pool A match, the timing of such awareness couldn’t be better for the Wallabies.

So this is my campaign: we need to get the message out there and out there loud: #ScrumStraightJoe

I know Will Sinclair is with me, because it was his comment on my Australia-Uruguay reaction piece yesterday that inspired today’s column. Like Will, I hope Marler’s tactics and Kaplan’s comments have made it all the way to the plush suites of wherever the World Rugby heavies are staying, and indeed, into Romain Poite’s pigeon hole. The message should be simple: #ScrumStraightJoe

The Wallabies scrum is much improved in 2015 under Mario Ledesma, but the pressure that’s piling on the English team currently – no Rugby World Cup host has ever failed to make it out of the pool stage – means that they will try whatever they think they can get away with at scrum time, and indeed, all across the park.

It means that Wallabies’ eight needs to ensure that not only are they comparative angels in the eyes of Poite, but that they are up to whatever the English pack try on them.

A number of you commented at the time, and again in the last few days, of Dan Palmer’s mention last week of how French referees generally side with the dominant scrum.

“I might be over-simplifying it, but in a way, I think the French have it right. They will not look at technical things too much, and they will just reward dominance,” Palmer said in my scrum chat with him last week. “So if you’re dominant, it’s probably going to go in your favour. You might be dominant for slightly illegal reasons, but who cares, that’s the art, and you’ve got to get better at that.”

Now again, and as I did at the time, I must reiterate that the written text taken literally does have a different meaning to the way the words were delivered at the time. Palmer is not saying that French referees ignore illegalities and just reward carte blanche dominance. Rather, what he means is that if your pack is winning the engagement, and you’re able to achieve go-forward within the scrum – mostly legally – you will win more scrum penalties than you concede.

It’s also true that the Wallabies haven’t had the best of times with Romain Poite in the past; another reason why the Australian scrum must be on its’ best behaviour.

The key to highlighting Marler’s country-street-parking-angle of engagement is going to be Sekope Kepu and his flanker on the tighthead side keep their hips square and in close to the lock. And if the Wallabies’ concerted second shove can achieve go forward themselves, then Marler and Robshaw’s angle can be accentuated further. Done well, the Wallabies might even be able to shear Marler off completely.

Either way, and like all other battle across the park, it shapes as a massive test of the Wallabies scrum. If they’re good enough, they could send England packing. But it also requires that Poite and his assistant are also up to the task and not afraid to clamp down on the clear infringements.