What could make a grown man yell and scream at his television at 4:30am on a Sunday morning? A Rugby World Cup final? Yeah, that would probably do it.

What a game. What a tournament. What a host nation. What a venue. What a team that won the whole thing.

As much as Wallabies fans will be thinking back to all those little things that didn’t quite go their way, all the things that could have been different.

But when you run into a team as good as that, you really do have to just pay credit to the better side.

Although it didn’t seem like a 17-point game, that’s what the scoreboard said at the end. It was tighter than that. Better than that. As a game, it developed from the first half to the second, and quite frankly turned into a classic.

It threatened to be a dour slugfest in the first half. Kicking punctuated the opening stanza – but it wasn’t aimless. Everything from the All Blacks had a point. They pinned the Wallabies into their own half, ran them around, didn’t give David Pocock and Michael Hooper a chance to attack the ball on the ground.

Simply, they were masterful; accurate in everything they did and deserving winners.

What more needs to be said? Well, a little bit, so here are my five talking points from the Rugby World Cup final.

Too big, too fast, too clever
The way the All Blacks started the game, it’s a credit to the Wallabies that they didn’t get beaten by 30.

They were on, from the very beginning. Everything was done with intent, and performed at extreme pace. It was an unbelievable showing, and there was a sense of inevitability about the result from the first minute.

Australia showed a lot of starch to even get to within four points.

Not only did the All Blacks look bigger and faster than the Wallabies, they had a gameplan that Australia failed to combat.

Simply put, the All Blacks were cleverer, faster, stronger, bigger and better. How do you beat that?

Take a bow, Dan Carter
Australia within four points. 15 minutes to play. All the momentum was with the challengers for the title.

But the ace stepped up in the final moments. Beauden Barrett’s last-minute try pushed the margin out, but the thing that won the game for the All Blacks was Dan Carter’s drop goal.

Then, when the chance came to put it to bed, Carter stepped up from 50 metres out to kick the goal, capping off a perfect night with the boot.

It was a flawless flyhalf performance.

Before those final minutes, Carter had outpointed his opposites every time he had the ball in his hand. His kicking game – out of hand and off the tee – was sensational, and meant that a vast majority of the game was played in the Wallabies’ half, allowing the Kiwi forwards to apply the blowtorch.

It’s fitting he gets to walk out a winner, after so many doubts about his form and abilities towards the end of his career.

The battle of the breakdown
Talked up as the point of contention before the match, Australia’s chance was to dominate this area on the ground.

Basically, it was not a factor.

Hooper and Pocock pilfered a few balls early in the first half with the All Blacks hot on the attack, but New Zealand chose to exit every time they were more than 40 metres from the Wallabies’ line.

Tactically, the All Blacks moving the ball to the shortside played a big part in this, as did the fact that their forwards made it over the advantage line more times than not. 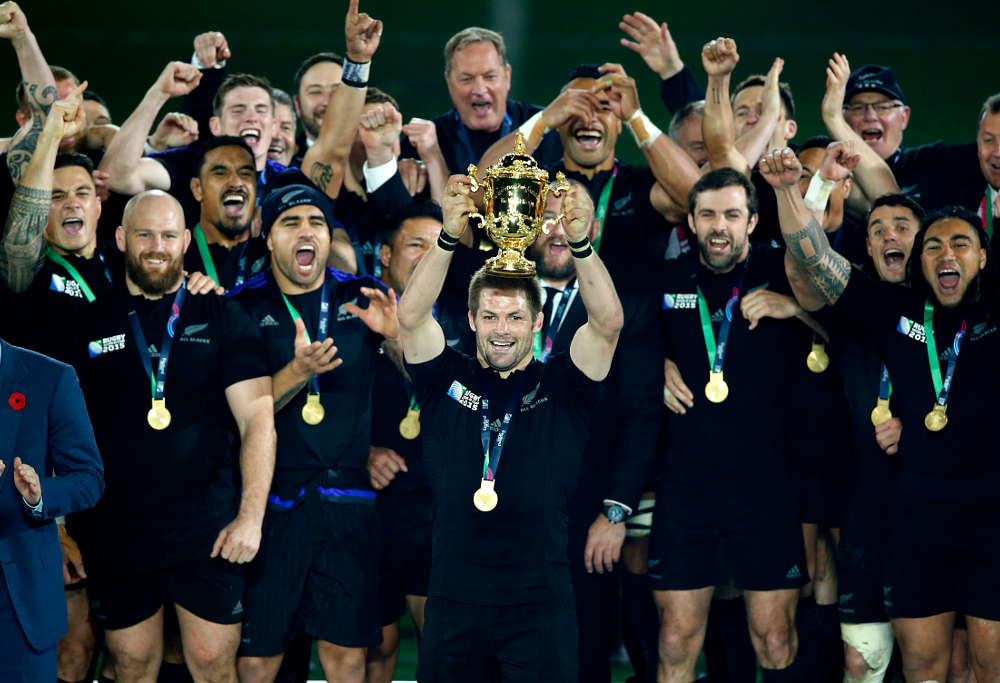 The All Blacks celebrate after winning the 2015 Rugby World Cup final against the Wallabies (Photo: AFP)

Both sides’ fans will grumble that he missed a decision here and there. There were two point-scoring opportunities in the first half in particular that Wallabies fans will lament.

But what was so great about Owens’ performance was that he let the players on the field decide the game, and he didn’t allow the game to descend into ugly rugby.

It started out that way – but it wasn’t to do with Owens. Both teams were intent on kicking in the first half, but both grew into the game, and executed running rugby.

If that’s not a testament to a good refereeing performance, then nothing is.

Frankly, I haven’t been around long enough to make a call on it. But the best teams I’ve seen are the 1999 Wallabies team, the ’03 England team, and this team.

In terms of total rugby, this is the best team I’ve seen.

They’ve lost three games since the last time they won a Rugby World Cup four years ago. It’s hard to see how another team could be better.

Bonus talking point: So long, and thanks for all the fish
It’s been a fantastic tournament, both on the field and on The Roar.

We’ve had some brilliant moments from some of the best players ever, and we’ve had some terrific articles written on the site. It’s been a blast.

So I’ll say so long, for now, and we’ll see you in four years.

So long to the 2 million people who visited The Roar over the past month.

So long to the Rugby World Cup, and congratulations New Zealand.

Those are my talking points Roarers. What were yours?