The Roar
2nd December, 2015
7
Join the conversation
Advertisement
Write for The Roar

Mal Meninga has officially replaced Tim Sheens as the Kangaroos’ coach, on a contract that will see him in charge until 2019.

Meninga will oversee Australia’s attempt to retain the World Cup at the 2017 tournament.

More importantly in the immediate future, Big Mal will be charged with getting the Kangaroos back to the top of the international rugby league standings, the side having slipped from top dogs in the wake of the 2013 World Cup to second, behind New Zealand, after a number of unsuccessful and quiet years.

After ten years in charge of the Queensland State of Origin side for nine series wins, including eight in a row between 2006 and 2013, Meninga is arguably the most successful representative coach of all time, and thus primed to return Australia to their glory days.

“For the players, it is the ultimate privilege to the wear the colours of your country, and it is something that they all aspire to,” Meninga said.

“For me, it’s always been something I’ve wanted to do. It is truly an honour to be in this position, as the new coach of the Kangaroos.”

“Mal’s work with us starts today – so it is a very important day for the Kangaroos,” Greenberg said.

“Our aim is to win the Rugby League World Cup in 2017 and the job officially begins now.”

Despite rumours of a $300,000 annual salary, Greenberg took to Twitter to dispel any notion that Meninga’s job was a full-time one.

Despite some commentary today the @Kangaroos Coach is not a full time role! It is a dedicated appointment without State or Club ties.

“Mal’s reputation as a player and as a coach, and also as a figure in our game, is second-to-none,” said Greenberg.

“This is an incredibly exciting appointment for the Kangaroos.

“We feel that Mal’s appointment will ensure that playing for the Kangaroos is the pinnacle of a player’s career, which is the way it should be.

“The progression of Mal from one of the most successful Queensland coaches ever to the Australian coaching position is an appropriate one for the game.

“Playing for the Kangaroos should be the greatest honour a player can have and Mal will no doubt bring that mentality to the squad.”

Meninga also spoke of his determination to see the Australian program improve from the bottom up.

“I am looking forward to the opportunity to improve the Kangaroos program, developing emerging and high-performance players including the Junior Kangaroos and Australian Schoolboys along the way,” Meninga said.

Cameron Smith, who has captained Queensland under Meninga since 2012, was excited to see Meninga take the top job.

“I couldn’t think of a coach more suited to this role, given Mal’s achievements as a former Kangaroos captain and his understanding of what representing Australia means,” Smith said.

“He has a proven record at representative level, as well as a tremendous ability to help his players perform at the highest level.” 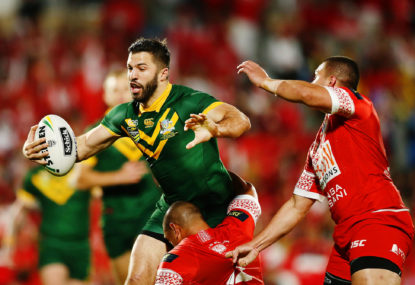 An extension of the closure of Australian borders is now the biggest threat to the 2021 rugby league World Cup, organisers admit.

Over 770 players have been deemed good enough to represent Australia in rugby league internationals over the years, whether they be Test matches or World Cup games (including Super League). A few days ago, as I was aimlessly flicking TV channels, I came across a replay of the first Test of the 1986 ‘Unbeatables’ Kangaroo tour.

In a rugby league season with no international matches having taken place, it made a lot of sense to name a Kangaroos merit team to celebrate what could have been in a more normal year.