Being an umpire or referee in any sport is a tough, and often thankless job. You are constantly assessed and criticised by the vast majority of people that are watching, even if the viewer has little or no idea of what is happening with the game.

These people look at one thing: free kicks. Namely, free kicks that they disagree with, usually for the reason that it went against their team.

On the other end, you often have a coach or assessor at the ground, whose job it is to evaluate your performance. These people look at everything you do; positioning, game control, body language, communication.

There is a whole side to officiating a game that most people only notice when something goes really wrong.

Like a footy club, umpires work as a team. From a junior game with two field umpires, right up to a full panel of 11 umpires (three field, four boundary, two goal, two emergency), everyone works together on the day to minimise the incorrect calls. It is not uncommon to hear another umpire yell “nice bounce” or “good throw” after good execution in a game. Alongside positioning, teamwork is one of the major factors affecting how many incorrect decisions are made in a game.

During the week, just like a footy club, umpires train together. Twice a week, the umpires from the local area will go through drills to improve their fitness and skills.

Also like a club, sometimes everyone will train together, whether you are state league level, or about to do your first Under-12s game as a teenager. Other times, people train separately, so that the session is at a pace that will suit everyone.

The general football population expects umpires to be perfect. On the one hand, I see this as a compliment; that perfection is within reach. If the level of officiating was consistently lower than the expected level, then expectations would be altered to reflect this. However, the expectation is still that there will be so few mistakes in a game, that those mistakes can be individually discussed (and often criticised).

There is a saying around the umpiring world: “The day you have a perfect game is the day you retire.” In other words, there is always room to improve.

But umpires are only human. In one game, a field umpire will make many thousand decisions (or non-decisions), all in real time, with less than a second to process each one. Then you have the distractions: the crowd, the weather, players, runners, trainers, all in the same space as you. All it takes for one of these people to obstruct your view of a contest is to run past at the wrong time. In the blink of an eye, you may have ‘missed’ something, even though you are in perfect position.

Spectators often think they have a free pass when talking about umpires. They believe that it is their ‘right’ to use abusive language, and insult the umpire as a person because of what they do.

In a game I officiated earlier this year, a player going for the ball was crunched in a big (but legal) hip-and-shoulder from a much larger opponent. The opponent who laid the hit was very sportsmanlike, checked that the injured player was okay, and signalled to the bench when the answer was no. The player was helped from the field by his team’s trainers, and the game continued.

A few minutes later, at the three-quarter-time break, the injured player’s mother stormed out onto the field (into the area that is set aside for only umpires), swearing at us, calling us incompetent, and demanding that the player who laid the bump be reported and sent off the field.

A polite explanation of our course of action was met with increased abuse from the woman, who had to be taken away by some of her son’s teammates to settle down.

Another example, and one that I am less proud of, was from earlier in my career as an umpire. A young field umpire was just starting out, and learning very quickly. A group of us were in the stands to provide some support to the umpire (a common occurrence), when again, a player’s mother was complaining about every ‘mistake’ that the umpire made, even though most of the complaints were completely baseless.

A few of the less tolerant in the group (including the young umpire’s brother) quickly figured out who the lady’s son was, moved directly behind her, and started to make comments every time he missed a kick or dropped a mark. The mother didn’t take long to get annoyed at the complaints about her son, and asked why they were singling out her son like that. When they pointed out that she had been doing the same to one of their friends, her response was, “But he’s an umpire.”

After a few minutes to calm down, both groups apologised to each other.

But what happens if you don’t have a group of semi-confrontational people willing to stand up against that ingrained abuse? A lot of spectators don’t even realise what they are saying about the umpire, and some believe that because they are talking about an umpire, they can say what they want.

A shift away from the abuse of officials at higher levels is slowly filtering down through competitions, but there needs to be more people pushing this message right through to the grass-roots level, as that is breeding ground not just for players, but the next generation of officials as well.

Robert Murphy has been a vocal proponent of showing umpires more respect, and a favourite quote of his sticks with me for every game of sport that I watch, officiate, spectate, or am involved in any capacity:

“For anyone going to the footy this week, at any level, raise a glass to the umps. Footy needs them.”

In closing, I have a simple request: imagine the umpire or referee out there giving up their time to run the game is your son, daughter, brother, sister, best friend or teammate. If you wouldn’t say what you are thinking to them, why should someone else have to cop it, just because ‘they are an umpire’? 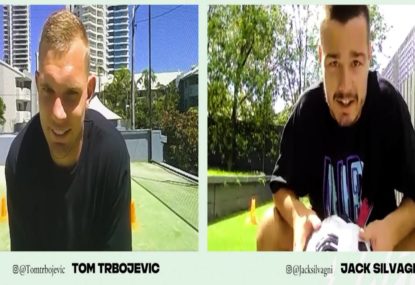