The Bronco brief: Denver’s case for the upset

Are the Carolina Panthers really going to win the Super Bowl with Ted Ginn Jr as their number one wide receiver?

The Panthers have been the least heralded 17-1 team in NFL history, largely because nobody has believed in their skill position players.

Greg Olsen is a monster, but outside of his star tight end, Cam Newton has mainly succeeded with scraps to work with on offence.

Jonathan Stewart is fine but unexceptional at running back, a 5’10 ground and pounder who has topped 1000 yards just once in his career. Ginn is a journeyman cast-off who has changed teams four times, Devin Funchess is a rookie, and Jerricho Cotchery featured in Madden ’04.

Denver’s strongest hope for victory will come from the belief that their defence is so good and Carolina’s offence is so dependent on Newton, with only Olsen talented enough to bail him out, that they’ll be able to prevent the Panthers from putting up points.

The Broncos defence is the league’s best by a significant margin, whether you’re going by DVOA ranking or the eyeballs of any person who watched the AFC Championship game. Their offence is garbage that occasionally gets set on fire though, with the pungent fumes sailing through the air much faster than Peyton Manning’s tragic floating passes that die on the road to nowhere.

The Broncos finished the year with the league’s 25th ranked offence in DVOA, a ranking inflated by Brock Osweiler, who for all intents and purposes is a better quarterback than Manning in 2016. Before the five-time MVP was mercifully replaced by Osweiler against the Chiefs in Week 10, the Broncos had the league’s worst offence.

Denver isn’t going to be able to score against Carolina’s second-ranked defence. If they put up more than 14 points it will be a minor miracle. They couldn’t get anything going on the ground against the Patriots and it’s hard to see them having any more success against the Panthers. They’ll have to hope that the brilliance of Demaryius Thomas, Emmanuel Sanders and Owen Daniels can keep the chains moving and Manning has a couple of pearlers in him like last week’s immaculately delivered second touchdown pass to Daniels.

But if Denver wins, it’s not going to be because Manning found the fountain of youth. He is what he is at this stage, which statistically is the worst starting quarterback in the NFL. Sunday in San Francisco will represent the biggest gap in quality between starting quarterbacks at the big dance since Manning himself went up against Rex Grossman in 2006.

We have over a year’s evidence to suggest that Manning has nothing left, but Denver just needs him to feign competence for one more week, as he did against Pittsburgh and New England. Denver needs to eke out 13 to 20 points against Carolina and then hope that its defence isn’t just the best in the league, but one of the greatest of all time.

What makes this Super Bowl fascinating is that after last week’s performance, it’s not unreasonable to think that Denver’s D might just have all-time greatness in them.

There have been some legendary defensive performances in the playoffs in the 21st century. These Broncos know that all too well, having been obliterated by Seattle’s ferocious defensive unit two years ago. The Ravens have had their share of transcendent defences, bludgeoning the Giants in 2000 and the Patriots in 2013. Wade Phillips’ Denver defence seems to be in that calibre. While the Broncos might only have 13 points in them, they might be able to hold the Panthers to 10.

Cam Newton might be the NFL’s best player, but that means little after the nightmare the Broncos defence put arguably the game’s best ever quarterback through last week. Von Miller and DeMarcus Ware lived in the New England backfield all day, treating the Patriot offensive linemen like turnstiles. It wasn’t entirely surprising – the Patriots have a bad offensive line, ranking 18th in the league for pass protection. Worryingly for Carolina, the Panthers are even worse, ranking 21st.

Playing in the putrid NFC South, Carolina had an easy schedule but they’ve still come up against a top-ten defence five times this season. The results: 31 and 27 points against Seattle, 49 against Arizona, 37 against Green Bay and 24 against Houston. Aside from their lone loss, a 20-13 defeat against Atlanta where Carolina had nothing tangible to play for, the Panthers haven’t been kept below 20 points all season. That doesn’t bode well for the Broncos, who will have few discernible avenues to 20 on Sunday.

Denver will have to hope that its defence is historically great to the point of being the outlier that can contain Carolina. They should be confident in stopping Stewart on the ground, and if they can restrict Olsen then Newton will have few other places to turn. Denver got inside Brady’s head with their ferocious pressure last week and they should be even more confident getting inside Newton’s, playing in his first ever Super Bowl.

If Denver’s defensive line can dominate Carolina’s O-Line, the stellar secondary wraps a tight blanket over Carolina’s limited receivers, and the pressure and lack of open men rattles Newton, then Denver can win. They have a slight edge in special teams, ranking 14th in DVOA against Carolina’s 23rd ranked unit, and they’ll need that edge to manifest in favourable field position.

All these things are eminently possible. Denver’s defence is that good. They have karma on their side with the Manning fairytale narrative combined with the ugly stories about Carolina’s players attacking Odell Beckham Jr with a slew of anti-gay slurs. Thomas Davis will likely be playing at half strength if he plays at all, and Denver has experience on their side.

Manning has played in more big games than anyone aside from the guy his team just knocked out, and Denver has Super Bowl experience from just two years ago. They were embarrassed that day, but that could be liberating this time around. They have nothing to lose and they won’t be afraid. Carolina might be, and they have everything to lose.

And in saying all this… 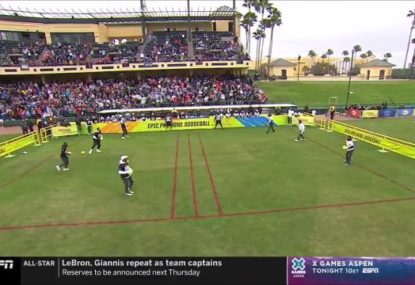