Australia's selection crisis: Time to return the team to the people

From this day forth, the current selectors are instructed to immediately cease selecting.

Selecting will now be performed by new selectors, with a new panel to be made up of everyone and anyone who doesn’t sit on the current panel. Capiche?

That’s right, moderately desperate times call for overly desperate measures from people unequipped to perform such measures, and that’s why I’m proposing to tap the shoulders of the current gaggle of goofy geese, send them off to in to the lawn-bowls sunset and replace them with you.

Yeah, you. The real brains of Australian cricket. Because it’s about time this job was done proper-like.

More cricket:
» India will win the World Twenty20
» I’m calling ‘stumps’ on this summer of discontent
» Players to watch in Sheffield Shield
» How’s this for a Test World Cup idea? (Part 1)
» Selectors should not be commentators
» The Liebke Ratings: New Zealand versus Australia first ODI

Whether you’re a cool head, pitchfork waver, keyboard basher or indifferent bohemian, you’ve got yourself a gig on my new national selection panel.

Congratulations on your appointment – now prepare to take these oily reins and get working on this depressing pig-sty of broken visions.

After our loss on Wednesday to New Zealand, it has become clearly apparent that Australian cricket is breathtakingly dysfunctional. This is solely due to the organisation’s insistence on the outdated method of relying on the intuitiveness of old dudes for team composition.

Up until Eden Park, employing a few old steamers from the boys’ club to pick names out of the hat was a policy that not only served Australian cricket well, it’s also served old steamers very well. For example, Rod Marsh secretly owns the titles to Western Australia.

But now, these arrangements have obviously soured.

So the time has come to drop everything and listen to me. Cricket Australia, James Sutherland and whoever’s there on better pay than me, I’m urging you to move confidently in to the 21st Century and try some new s**t.

And the new s**t is the people.

As is common knowledge, when they’re winning and doing it politely, the Australian Cricket team is the people’s team, and when they’re not, they’re Rodney’s team. Right now, Australian cricket is sitting in a portfolio alongside Western Australia.

To fix this, my radical blueprint proposes the people’s team be shifted permanently back under the caring jurisdiction of the people. This is because the man in the street knows best, cares most and charges least, plus Warney’s unavailable due to crusading for televised sex in the African jungle.

So to the powersuits at the head offices in Jolimont, time to get up and about.

Get off your neatly pressed trousers and devise a membership program for Australian cricket fans that gives us a say in the running of our team.

Charge a small fee, pacify us with a lanyard and a hat, and when team selection comes up, use the bloody CommBank Viewers’ Verdict for something slightly more meaningful than a poll on fast food preference.

Why wouldn’t it work? Just take a look at the winter codes, where footy clubs defer to the people all the time. A more serene and stable bunch of operations you would have to travel far to find.

What could possibly go wrong?

But of course, it would be remiss to not acknowledge the inherent dangers that come with democracy, and Australia is not immune.

Our past is a chequered with shameful names-elect such as Clive Palmer, Pauline Hanson and Shannon Noll. But I feel we’ve learned our lesson.

Didn’t we feel an aching sense of collective remorse after realising we’d given Tony Abbott a start? Did we refuse to allow Hot Dogs to win Big Brother?

The writing is on the wall – we are ready for this.

And besides, what other choice do we have when the current model is enjoying Defcon One disapproval levels? Kicking the selectors has become a sport that could qualify for inclusion at Rio. It’s got to stop.

In Australian cricket selection policy, it’s high time for radical, unreasonable and unrealistic change. Throw the selection process open to the people, or be damned to an eternity of rambling explanations and elite drink-runners.

Amongst New Zealand’s World Test Championship Final win in Southampton overnight, it was two more minor moments that underlined how captain Kane Williamson has led his side to the ultimate success.

New Zealand put some of their 2019 World Cup demons to rest with a stunning final day of the World Test Championship final. 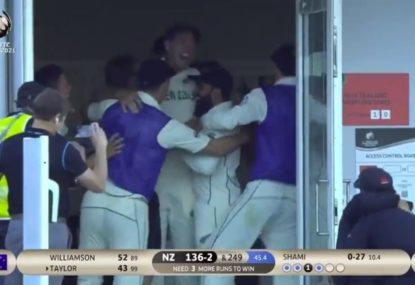 New Zealand have won the inaugural World Test Championship by eight wickets after bowling out India for 170 and reaching their victory target on 2-140. 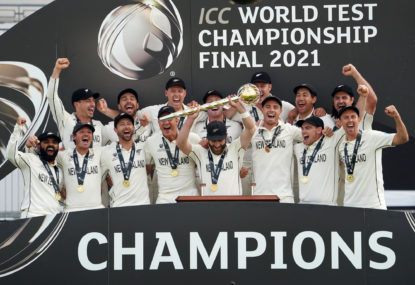 Ravi Shastri. The coach of Team India has had a very interesting career as a player, administrator and commentator.

The Illingworth St Mary’s club is paying the bill for the damage to Asif Ali’s work vehicle. 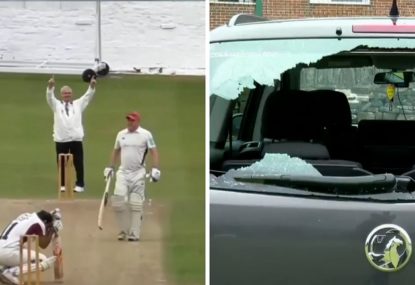