Panthers in PNG just as important as Auckland Nines

While the Auckland Nines was a great way to start the season, Penrith’s match against the Papua New Guinea Hunters was just as important for the game of rugby league.

On Saturday night, a young Penrith side took on the Hunters at the newly opened National Sports Stadium in Port Moresby, coming away with an eight-point win.

It was a sell-out crowd for the occasion, with some quality football played by both sides.

For Penrith, it was a great opportunity for their young players, led by Jamie Soward, to get a hit-out before the season starts. More than that though, it was good for a rugby league-mad community to see their side take on an NRL team.

We keep talking about the expansion of our game, without really conducting any market research. While it will be a long time before Papua New Guinea compete in the national league, taking a game there to gauge support and sentiment is a good step.

The Prime Minister’s XIII is another game that takes place in Papua New Guinea each year.

This game is what rugby league should be about: giving a quality product to the people who want it and appreciate it most.

The Panthers did a lap of the crowd afterwards, and there were joy and appreciation on the faces of people who got photos with the players, most of whom are yet to play in the NRL.

While the Nines replicated these themes over the weekend, the game in Papua New Guinea was just that little bit more special.

There was no controversy, no star players, no biff; just the game played for the enjoyment of the players and the crowd. It was simple but positive.

I hope the Panthers continue to take games to Papua New Guinea, and that first-grade games are played there in the future. Because this country have shown they will embrace the game just as much as New Zealand has with the Nines.

Cronulla were cooked long before Charlie Staines found his range at Kogarah, but with the sticks split after the Forbes tearaway’s third, Nathan Cleary had effectively put the statistical dagger through the Sharks’ season. Twitter exploded. Couch-bound statisticians served fact in what is mostly a buffet of distortion. It’s a dish well known and the […]

What a day for Charlie Staines! 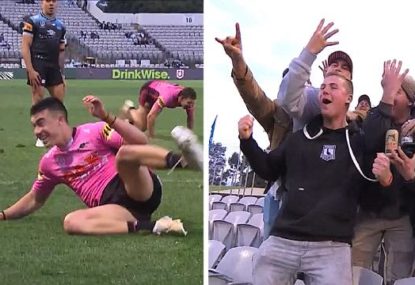 Josh Mansour wasn’t happy about being penalised for it! 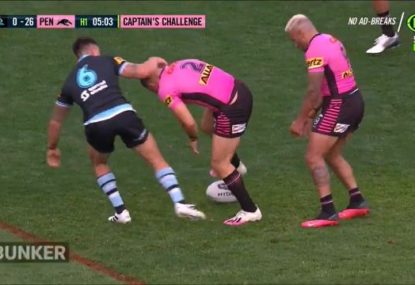