After a 16-year career as a professional, making it to a career-high ranking of number three in the world, Irish squash player Madeline Perry has made the move to Australia to take up the role of head professional at East Coast Squash Academy.

The Roar spoke to Madeline about the highs of her career, who her inspirations were, and what she’s seeking to instil in her charges now that she’s coaching.

The Roar: Tell us about the level of commitment required to become the #3 player in the world.
Madeline: To be a professional squash player, you have to dedicate your whole life to playing and improving all aspects of your game. That means training physically two on-court sessions per day, six days per week, and supplementing that with quickness, speed and agility training.

When that was done, I spent a lot of time planning what training I needed to do next in the different areas of my game so I was prepared and structured about my development.

Since you can’t work on everything at the same time, I had to plan the introduction of new skills, shots and other changes gradually, but as quickly as I could physically handle.

When you’re a professional, you can’t afford to lose ranking points. You don’t have the luxury of taking one step back to take two steps forward – except during the short off-season.

When did squash become more than just a fun activity and you realised you could make a career out of it?
Only after finishing university and not knowing what to do with a geography degree did I realise that becoming a professional squash player sounded like a fun job. At that point I was already No.1 in Ireland, so as soon as I decided to become professional, I just had to dedicate myself to the discipline of year-long training and then of course to the non-stop travel required on the world tour. I was fortunate to play on the tour for 16 years!

Who were you early role models or heroes in the squash world?

Surprisingly I hardly watched any squash matches as a kid. I guess it’s because it wasn’t on TV very much back then, and we didn’t have SquashTV.com. So I never really had a role model as a young player.

As I started to play in major international events, the great Australian player Sarah Fitzgerald certainly inspired me.

Now you’re coaching squash (most recently at Willoughby Squash Club and Bondi Waverley Squash Club), what are the most important tips or personal characteristics you like to drill into aspiring players?
During my career, I was definitely well known for my ability to volley, so hopefully I can pass that skill on to others. I was also very hard working and a tough competitor. I like to see young players giving it everything they’ve got, but most of all having fun and enjoying the sport.

Power aside, what are the major differences between the top male players and the top female players?

The women’s game has a lot more subtle touches and angles, and more manoeuvring. The men’s game now has more of this, but still has a lot more repetitive driving down the walls. The Egyptians have greatly influenced the game with a new attacking style of play, with blistering shots with very severe angles.

Who was your toughest competitor on the tour and why?
That would have to be Nicol David. The fact that I beat her only once during my entire career, and what a big achievement that was, shows how dominant she was when she was at the top of the rankings. No matter how well I played against her, she was always just one step ahead with a response.

That level of dominance and consistency is reflected in her amazing hold of the #1 position, but you felt it on-court during every single rally. That is the mark of a true legend.

The East Coast Squash Academy is proud to announce and welcome Former World #3 Madeline Perry as the academy’s head professional. Perry will be responsible for managing and coaching a variety of programs at both Willoughby Squash Club and Bondi Waverley Squash Club.

Three consecutive weekends of Supercars racing at Sydney Motorsport Park seems to have flown past, with so much unfolding across the nine sprint races contested thus far.

Kamaru Usman established why he is the #1 pound-for-pound fighter in the world when he successfully defeated his most hated rival in Colby Covington for the second time at UFC 268 and made it 15 consecutive UFC wins at Madison Square Garden in what was the fourth highest gate ever in the venue’s history. 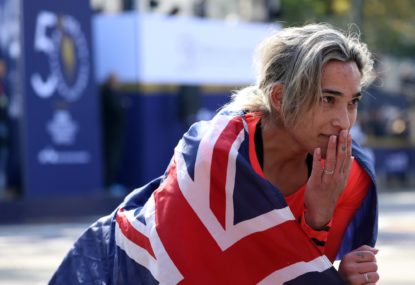