Welcome to the second year of The Roar‘s Top 50 players in the AFL.

Hyperbole aside, the five brightest AFL minds in the history of football (myself, Cam Rose, Ryan Buckland, Josh Elliott and regular Roar commenter TomC) have come together to thrash out who we believe are the best players in the game.

We’ll be counting down 10 players a day this week, and we’re going to take it from the top.

1. Nat Fyfe (Fremantle)
The Brownlow medallist, the two-time reigning MVP, the Greek Demigod, the best player in the game. Perhaps the most explosive aerial midfielder the game has ever seen, Fyfe is a superhero in the air and he’s not exactly terrible at ground level.

He has the toughness of Luke Hodge, playing last year’s preliminary final on a broken leg, and the smoothness of Simon Black, gliding around the ground like a pterodactyl, ready to take flight at any moment. He has either the best haircut in the game or the worst; I’m not sure which, but there’s no in-between.

After spending the first three months of the season as Batman, Superman and the Dawn of Justice, Fyfe faded in the second half of last year due to injuries, missing four games. Those injuries highlight the scariest truth about Fyfe: this season he should be even better.

2. Gary Ablett (Gold Coast)
Fyfe might be the best player in the league right now but Ablett is the best player of the past 20 years. For the first time since Chris Judd was running around on Subiaco, Ablett is no longer game’s consensus best player (although two writers did still have him at number one).

We haven’t consistently seen Ablett in God Mode since his shoulder was caught by Brent Macaffer in Round 16 2014 though, with his past season and a half curtailed by injury. When he’s fit, he’s the best combination of inside toughness and outside polish that football has known. Watch the throne, Nat.

3. Scott Pendlebury (Collingwood)
The last Matrix film was so bad that we will probably never see a fourth, but Keanu Reeves fans can take solace in the fact that Scott Pendlebury spends his weekends in bullet time, bending the time-space continuum to his own whims and fancies.

The Collingwood skipper finds room where none exists, leveraging the bloodthirst of opponents against them, sidestepping and weaving and dodging like his opposition are mothers with strollers at a shopping centre, and not elite athletes.

With Dane Swan’s descent out of superstardom and the departures of Luke Ball, Dale Thomas and Alan Didak, over the past few seasons Pendlebury has had to play the Joel Selwood role more often than anticipated, running a one man show at times in the Magpie midfield.

The arrival of Adam Treloar and development of Taylor Adams and Jack Crisp will hopefully lighten the load on Pendlebury this season, although he moves fairly lightly as is.

4. Patrick Dangerfield (Geelong)
How much difference can one player make to a team’s fortunes? That’s the question that confronts Geelong and Adelaide this season. Both teams have had other player movement, but the Cats are largely tipped to make a deep run into the finals (although, as Ryan Buckland has written, we need to pump the brakes on Geelong a little) while the Crows are expected to fall out predominantly because of #4 on our list.

Dangerfield is one of the game’s few superstars who might be good enough to justify those prognostications. He’s Road Runner meets Mad Max, a bullet of speed and a battering ram who takes vicious punishment but always seems to bounce back up. The happiest man in Australia after the Dangerfield move? Joel Selwood. 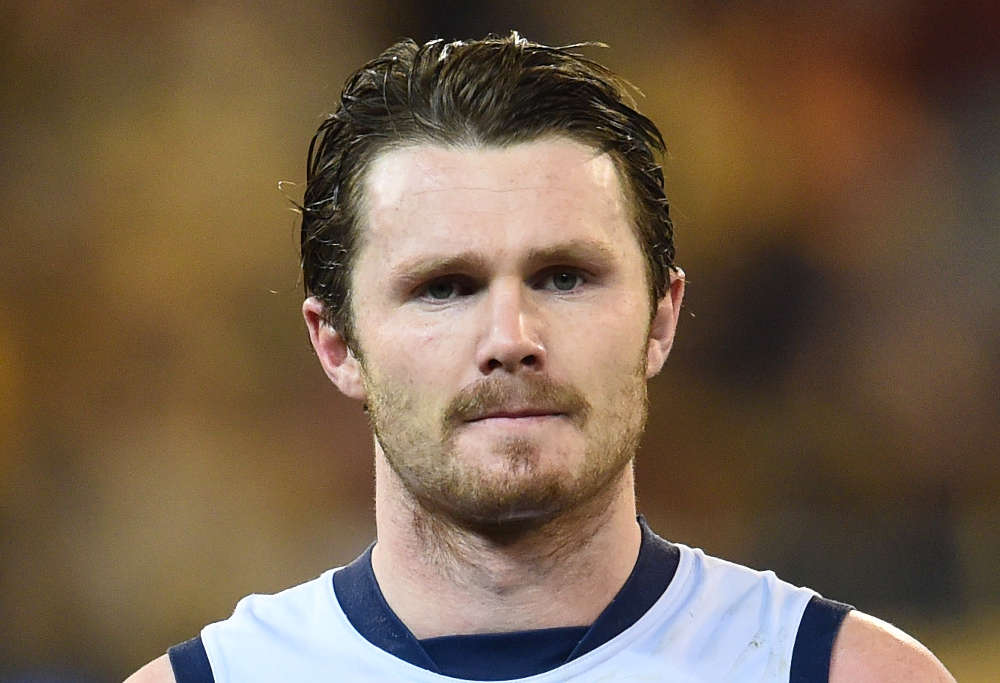 5. Lance Franklin (Sydney)
Every writer polled for this list had Franklin at either #5 or #6, which speaks to his odd place in the AFL hierarchy right now. Franklin is no longer the force that Sydney signed (which is a problem, because they signed him until 2047), and he averaged his lowest goals per game tally last season since 2006.

The fit with Kurt Tippett has always been awkward and the balance between having Franklin play up the ground or close to goal hasn’t really been figured out either.

And yet, he’s still the most frightening player in the game to have the ball in his hands on the move around the 50 metre arc. He’s a match-winner, and virtually singlehandedly toppled Essendon in the fourth quarter of last year’s opener.

Whatever the repercussions of last year’s strange finale for Franklin, this year shapes as decisive for the game’s pre-eminent forward, now 29 years old.

6. Robbie Gray (Port Adelaide)
Last year was a down season for the Power but not for Robbie Gray. After being a Brownlow medal fancy in 2014 and even getting some ‘best player in the game buzz’ (in fairness, it was of the same variety that Dale Thomas got from Ross Lyon in 2011. Remember when Dale Thomas was good? Anyone?), Gray improved across the board in 2015.

He improved on all the hard stuff, spending more time in the midfield and upping his contested possessions, tackles and clearances, while also lifting his effective disposal percentage. A maestro in tight spaces and all class in front of goal, Gray will be the player leading the Port revival.

7. Todd Goldstein (North Melbourne)
The best ruckman in the game, Goldstein led the competition in hit outs and hit outs per game last season, which seems improbable in a league where 211cm of Aaron Sandilands exists.

A beast in the ruck, North’s big man is also a force around the ground. The transcendent rucks are always the ones that pop up on the half back flank or on random contests on the wing to take huge contested marks and keep the chains moving for their team, just when their foray forward seems to be stuck in mud.

Luke Darcy, Dean Cox and Jeff White made a living out of this. It’s the final frontier as a ruckman, and last season Goldstein got there. He’s a superstar. 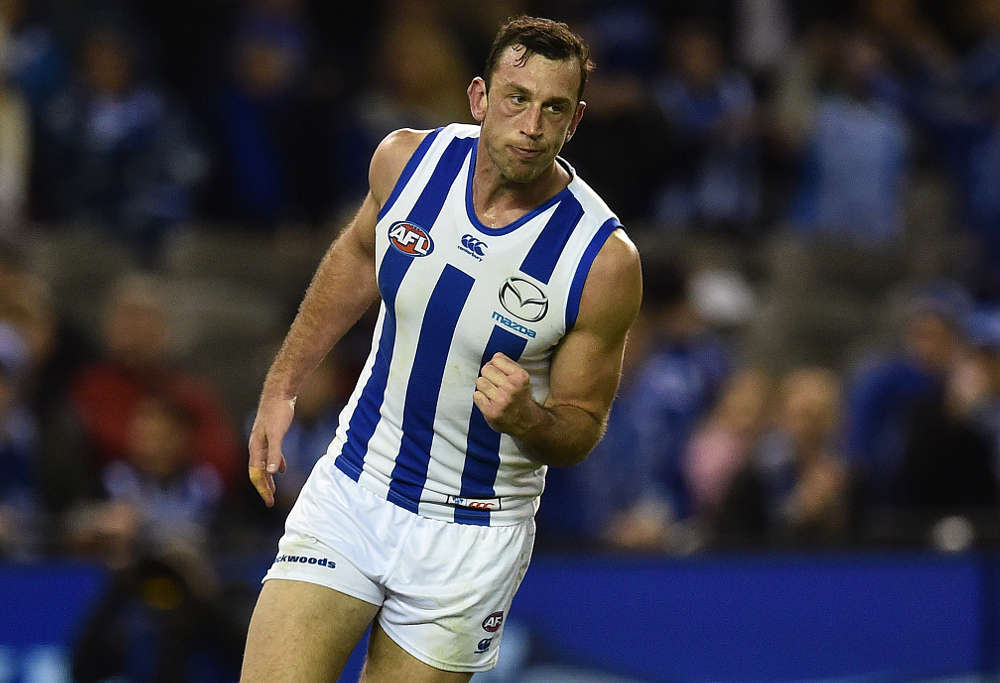 The most inspirational player in the game, Hodge is an animal who seems to enjoy getting hurt. He’s also a silk salesman though, and his skill is as majestic as his hardness is brutal.

THAT goal in the grand final, that stupid, heavenly banana from the left forward pocket, was a fitting exclamation mark to Hodge’s legacy. There’s nobody better in the game at lifting his teammates and turning the knife into the hearts of the opposition at the same time.

9. Sam Mitchell (Hawthorn)
Last year I was staring at my phone walking along Glenferrie Rd and I bumped into a kid. I quickly apologised, but then when I looked down at the little person that I had bumped into I realised that it wasn’t a kid, it was the best football player in maybe the best football team of all time.

Sam Mitchell doesn’t look like much. He’s 179cm and 84kg, and when you see him in the flesh those numbers seem generous. But his small frame only makes his imposing output all the more incredible.

Last year’s league leader in disposals and effective disposals, few in the game’s history have been able to find the ball as easily as Mitchell or use it as well as him (by either foot).

He’s the best clearance player I’ve ever seen, a wizard in tight spaces, making the maneuvering of space and body position an art form. Over the past few years when teams have devised plans to stop this great Hawks team the first question has been: ‘How do you stop Sam Mitchell?’

It’s a question that almost led Ross Lyon to play Ryan Crowley after a year on the sidelines, and to be honest, he probably should have.

No, Mitchell doesn’t kick many goals and no, he doesn’t have the aerial presence that so many modern midfielders do. Rafael Nadal doesn’t have a great serve, Tom Brady can’t run fast and Stephen Curry can’t really dunk either. Mitchell’s strengths as an interior midfielder and ball user are so great that his shortcomings are effectively non-starters.

Since 2006 only Gary Ablett (210) and Dane Swan (186) have tallied more Brownlow votes than Mitchell’s 183. In that time he’s won the Hawthorn best and fairest four times. Nobody else has more than two. I had him #3 in my personal top 50, and my only question was whether he should have been #2.

10. Alex Rance (Richmond)
Alex Rance sure went from good-looking punchline to good-looking freaking superstar in a hurry. Rance’s rise into the game’s pre-eminent defender has mirrored Richmond’s rise into one of the game’s elite defensive teams. Strong enough to win one-on-ones with brawn, savvy enough to win them with body position and timing, and fast enough to stay with anyone on a lead, Rance is the complete defender.

He attacks the game in the mould of a Matthew Scarlett or prime Brian Lake, an elite decision maker who knows when to leave his man to provide help as a third man up or take intercept marks to drive the Tigers’ moves forward.

There was some strange personal stuff swirling around Rance in regards to his love for football and he started off last season in a funk, but that all just turned out to be noise. By the year’s end he was All-Australian for the second year running, Richmond’s Best and Fairest winner, and the consensus best key position defender in the game.

If we’ve left anyone out or got someone wrong, let us know in the comments below. Tomorrow, Ryan will take you through our next ten players.