Jack of one trade: Watts finds his place

If you look at Jack Watts long enough you start to see Josh Fraser. And it’s not just the sad, perpetually sagged shoulders.

Watts has Fraser’s same laconic dawdle, where his slow movements seem to oscillate between composed and apathetic. It’s similar to the way Damien Martyn used to bat – when it works, it’s effortless. When it fails, it’s, well, lacking in effort.

The likeness between Watts and Fraser, of course, stretches beyond their gaits. Both were number one draft picks, and neither delivered on their pedigree. For a decade Fraser was supposed to be the Magpie saviour, the skilled, versatile big man in the middle who would always give Nathan Buckley first use of the ball. Naturally, it was the year that Collingwood dropped Fraser that they won the flag.

All number one picks come with inevitable saviour tags, but in the case of Jack Watts, his followers were particularly desperate to see Jesus in the form of a skinny 17-year-old. 44 years without a premiership and having won eight games in two seasons, the Demons were desperate. They irresponsibly threw Watts into the fire before he was ready, wheeling him out in his debut on Queen’s Birthday 2009 as a star attraction. In the commentary on the day, Tim Lane said it best: ‘The spotlight, I don’t think, has ever shone so brightly on a number one draft pick.’

Watts’s first touch, where he was mauled to the ground by Shane O’Bree, Nick Maxwell and Heath Shaw, set the tone for his career. He was constantly under siege, his toothpick frame and dangly shoulders having no hope of carrying the burden of an entire football club’s hopes and expectations.

Watts could never really find his place. Over the past seven years he’s played as a defender, an on-baller and a forward. He’s found patches of form, but has been mired in longer patches of inconsistency. He’s been dropped several times, and once, quite memorably, by himself. He’s shown flashes of being a useful AFL player, but that’s always been overwhelmed by his draft position, which has always defined him. Of the first 11 players taken in the 2008 draft, Watts has been the weakest. In seven seasons he’s polled seven Brownlow votes total, the last of which was in 2013.

Watts’ output on the field has been largely sub-par, becoming a player whose loudest cheers have always come from the Bronx. But he hasn’t been helped by his situation or his club. He’s had five head coaches in the past six years, all who have had different visions for him as a player, and different levels of confidence in him. Stability has been an impossibility.

The problem with Watts is that he’s never had an obvious position. He’s too plodding to play in defence, not hard enough to cut it in the midfield, and not assertive enough to play forward, where he’s drifted out of games in the past. But he’s always had enough attributes to more than make it in this league. He’s a beautiful kick of the ball, a calm decision-maker, possesses great hands, and is an underrated aerial threat, capable of taking difficult overhead grabs.

Watts, may, however, have finally found his niche. Playing predominantly forward, he’s had the best month of his career to start the season. Among the best in the Round 1 win over GWS, Watts made a fool of Matt Buntine, turning himself out on the boundary with deft, Scott Pendlebury-like misdirection, and later taking a huge mark on his head. He’s kicked seven goals in the past two games, mixing opportunism around goal with steady composure and reliable execution in front of it.

Watts is never going to be a star. In a lot of ways he’s antithetical to the helter skelter nature of modern football, where everyone around him seems to play at double speed while he plays at half-speed. Pendlebury plays at a similar pace, but exerts a control that mostly (although not always) eludes Watts. Watts, on the other hand, often seems like he’s trapped in someone else’s pinball machine.

Watching him from the MCG’s Great Southern Stand last Sunday afternoon, it was clear that Watts still has close to zero presence as a footballer. When Jesse Hogan is about to get involved in the play, you can feel it in the crowd. Greatness lingers on everyone’s mind. Watts offers no such feeling – he’s just a skinny dude that runs a little strange.

The game’s first goal was vintage Watts. He cleverly timed and directed his lead to leave an unaware Jesse White stranded (‘unaware Jesse White’ may be a tautology), dawdled after the ball, half-fumbled it, and then artfully dribbled in a goal that you never really thought was going in. A clinical set-shot finish from deep inside the left pocket in the second quarter was much cleaner, and such skill offered a glimpse of what has always made Watts so tantalising.

Watts finished Sunday’s game with 18 touches and four goals as one of his team’s best performers. He has stability in his role as a permanent forward, and he’s not drifting out of games as often as he has in the past.

A year ago I wrote that Watts had the physical aggression of a paperclip. He’s still not especially imposing, but he’s at least pulled the paperclip apart to make its ends more weaponised. When Tom Langdon, in trademark fashion, kicked the ball across the face of goal straight to Dean Kent to end Collingwood’s meek comeback in the third quarter, Watts was the first one to get in Langdon’s space to let him know about it. Is this a great way to measure footballers? No, but it was good to see Watts show some fire all the same.

The Demons are one of the hardest teams in the league to figure out. Are they the team that storms home to beat GWS and comes within a kick of toppling the ladder leaders? Or are they the team that gives North a 42-0 start and lose to Essendon? Sunday’s win wasn’t as impressive as it was efficient. Collingwood have been the worst team in the league so far, and their ‘Keystone Cops’ comedy of errors last Sunday meant that a 35-point win was par for the course.

But it’s been a long time since a 35-point win was par for the course for any Demons team. In fact, it’s been a decade. The future right now is the brightest it’s ever been in that time for Melbourne. In Hogan they have their club’s cornerstone, and in Tom McDonald and Max Gawn they have other capable key position pillars. The midfield is littered with young talent, and the Roos veteran recruits have largely delivered.

It’s long seemed inevitable that if Melbourne were going to have success, it would be without Jack Watts. He would fade away into obscurity like Josh Fraser did, or be banished to another club like Jimmy Toumpas. That no longer seems the case.

Watts has never had the ability to lift the Melbourne Football Club up onto his shoulders like so many expected him to when he entered the league. But he’s perfectly capable of playing a smaller role and helping his club achieve success. When Melbourne drafted him that’s not the role that they would have wanted, but if Jack keeps trying, well, they might find it’s exactly what they need.

Seeking an in-depth analysis of each club’s chances in 2020? You’ve come to the wrong place. Looking for an off-kilter and slightly unhinged reason to watch each club in 2020? Step into my office. Jayden Hunt The law said no multi-coloured headbands. Jayden Hunt volunteered as tribute. Jayden Hunt fought the law. Jayden Hunt won. […] 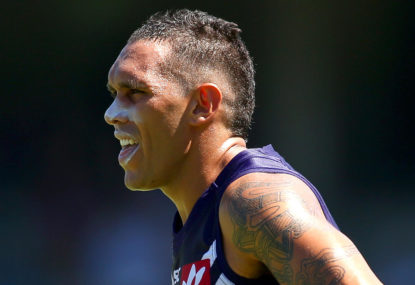 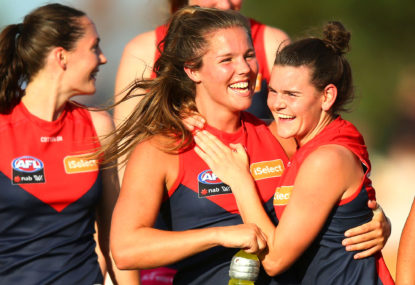