Revisiting Sirengate, a decade on

Avatar
Roar Guru
2nd May, 2016
6
Join the conversation
Advertisement
Write for The Roar

Last Saturday marked exactly a decade since one of the most controversial matches in AFL history was played.

On Sunday, April 30, 2006, St Kilda and Fremantle descended onto Aurora Stadium for a match which would test each other’s finals credentials this early on in the season.

The two teams had met at the same venue in Round 2 of the previous season, with St Kilda winning a low-scoring encounter by a point following a contentious holding the ball decision against Fremantle.

The clash before that saw the Dockers win a thriller by five points after Justin Longmuir kicked the winning goal after the final siren. It was set up by a Luke McPharlin tackle on Saints defender Justin Peckett in the final minute of the game.

While the result helped to keep Fremantle’s finals hopes alive (they would later be extinguished after a loss to Port Adelaide in the final round), it was marred by some contentious umpiring decisions that helped to swing the game in their favour, after the Saints had led by 16 points at three-quarter-time.

On the flight home from Perth, umpire Matthew Head was reported to have said “now I know what it feels like to have a victory” – comments that were also heard by Channel Nine presenter Tony Jones and several other passengers on the plane.

But nobody would have forecast the controversy that was to unfold in Launceston in Round 5 of the 2006 season.

Both teams entered the match with two wins and two losses each for the season, with St Kilda defeating Richmond and the Brisbane Lions in between interstate losses to the West Coast Eagles and Port Adelaide.

Fremantle, on the other hand, were playing in Launceston for the second time in a month, having gone down to Hawthorn by 22 points four weeks earlier. Their two wins came against Carlton and Port Adelaide, while their other loss was against Adelaide the previous week.

Including the loss to Hawthorn earlier in the month and the loss to St Kilda in the corresponding match the previous year, the Dockers had lost all five of their previous matches in Tasmania dating back to 2002.

However, they would defy their horror record in the Apple Isle to take a 15-point lead into quarter-time, by which point four players (Fraser Gehrig, Max Hudghton, Lenny Hayes and Jeff Farmer) were reported in a spiteful first quarter. They then extended their lead to 22 points at half-time, and an upset appeared on the cards.

They then appeared headed for victory when, leading by 27 points midway through the third quarter, St Kilda’s two-time reigning Coleman Medallist Fraser Gehrig gave away three consecutive 50-metre penalties, resulting in his direct opponent, Michael Johnson, kicking a goal that would give the Dockers a 33-point lead.

Just when it was thought Fremantle were heading for a comfortable victory, the Saints would come back, with coach Grant Thomas replacing Gehrig and Nick Riewoldt in the forward line with smaller targets in Stephen Milne and Brett Voss.

The Saints would storm back with seven of the next nine goals and when Leigh Montagna kicked a goal with less than 40 seconds remaining, the margin was one point.

At this stage, Fremantle were trying to defend their lead rather than attack, and very nearly paid the price for it.

During a television broadcast, when the clock hits 0:00 at the end of the fourth quarter, you’d expect to hear the final siren. However, in this case, the umpires didn’t appear to hear it, and play continued for a couple of seconds afterwards despite the protests of Fremantle players who claimed to have heard the siren.

In this period, Saints defender Steven Baker took a running shot at goal but missed to the left, being illegally bumped off the ball by Daniel Gilmore in the process. While this was happening, Dockers coach Chris Connolly and CEO Cameron Schwab stormed onto the ground, demanding answers.

While the discussion between the umpires and Fremantle players was going on, Saints midfielder Lenny Hayes told Connolly to get off the ground. Afterwards, Channel Nine boundary rider Michael Roberts said on the television broadcast: “I saw the clock go down off the TV screen, right? So I’m waiting for the [final] siren.

“Now as you said, the siren has been faint all day, so I’m standing on the boundary line, mass confusion with what is going on at centre half-forward.

“So, Chris Connolly doesn’t know, the St Kilda players don’t know and even the Fremantle players”.

Replying to a question posed by chief callers Dennis Cometti and Dwayne Russell, Roberts later said: “To be perfectly honest, I didn’t hear the siren, but I saw the clock go off the screen, when it’s supposed to have gone off”.

Baker decided to take another shot at goal, cancelling the initial point he scored a few minutes earlier, but again missed, leaving the scores tied.

The match thus ended in a draw and Connolly expressed his disappointment at the game continuing when the siren had supposedly sounded. He then said that he hoped the AFL would investigate the dramatic conclusion to the match, which Fremantle had dominated from start to finish.

Later, his St Kilda counterpart, Grant Thomas, acknowledged that his team had played poorly and were lucky to escape with the draw.

Indeed, the AFL Commission would launch an investigation into the match in the Wednesday following the match, and after much deliberation, they would award the victory and the four premiership points to Fremantle, stripping Steven Baker of the “point” he had scored after the final siren was supposed to have sounded.

The amended result proved crucial to the final ladder standings after Round 22. Fremantle eventually finished third on the ladder and went on to make the preliminary final for the first time, losing to the Sydney Swans, while St Kilda finished sixth and lost their elimination final to Melbourne.

Thomas was later sacked as Saints coach after the club stated that they wanted to move in a different direction, and was subsequently replaced by Swans assistant coach Ross Lyon, who beat the heavily-favoured John Longmire to the post.

Though the Saints would achieve reasonable success under Lyon, they could heavily regret not going after Longmire, who after taking over from Paul Roos as Swans coach at the end of 2010 would lead the side to the 2012 premiership, whereas Lyon would be unsuccessful in three attempts in 2009 and 2010.

Had the draw stood, and all other results for the rest of the season unfolded the way they eventually did, the final eight would have looked like this.
1. West Coast Eagles
2. Adelaide Crows
3. St Kilda
4. Fremantle
5. Sydney Swans
6. Collingwood
7. Melbourne
8. Western Bulldogs

And the schedule for the first week of the finals would have looked like this:

In the end, reigning premiers the Sydney Swans benefited from the amended result as it allowed them a second chance in the finals series, whereas if the draw had stood they would’ve been forced to play three consecutive sudden death finals matches just to reach their second consecutive grand final.

St Kilda would only play three times more in Launceston since that controversial 2006 match, defeating Port Adelaide later that year and then Hawthorn in 2009 before losing to the Hawks by just three points over a fortnight ago.

Fremantle, on the other hand, would not return to Launceston until the penultimate round of the 2010 season, when Mark Harvey, who took over as coach after Chris Connolly resigned midway through the 2007 season, sent a half-strength side east to face Hawthorn; the result would be a 116-point defeat.

The Dockers would lose a further three times to the Hawks in Launceston, and will face them again in the Apple Isle in less than a fortnight’s time.

Even after that controversial match a decade ago, the controversies between St Kilda and Fremantle would not end there.

When the teams met at Telstra Dome late in the 2007 season, Steven Baker felled Jeff Farmer in an incident that was not captured on camera, which meant that when Baker faced the judiciary the following week, the entire hearing would be based entirely on what the witnesses saw.

Upon being unveiled as Dockers coach, Lyon strenuously denied playing any role in Harvey’s sacking, saying that he had been headhunted by the Fremantle Football Club and that what the club wanted to achieve was what attracted him to the job.

Since then Lyon has taken the Dockers to four consecutive finals series, including the 2013 grand final, but has so far this season overseen the Dockers’ worst start to a season since they finished with the wooden spoon in 2001.

By contrast, the Saints have not reached the finals since Lyon left the club; after finishing ninth under new coach Scott Watters in 2012, the club would crash to 16th place the following year and Watters, a former Fremantle player, would be sacked.

Under Alan Richardson, the club would finish with the wooden spoon in 2014 as they set on a rebuilding phase, which they are currently in the midst of. They are aiming to return to the top four by 2018, by then which club veterans Nick Riewoldt and Leigh Montagna will very likely be retired.

Back on topic to finish off, and no one, especially the St Kilda and Fremantle fans, will ever forget the clash at Aurora Stadium in 2006 which will go down as one of the most controversial matches ever played in modern AFL history.

Brisbane have made their first official statement since news broke yesterday of a bombshell trade request by reigning Brownlow medallist Lachie Neale.

Young midfielder Adam Cerra is likely to play for Carlton next year after telling Fremantle he wants to be traded back to his home state of Victoria.

Fremantle have delisted Reece Conca, despite the 29-year-old building an excellent reputation of shutting down the AFL’s best small forwards over the past 18 months. 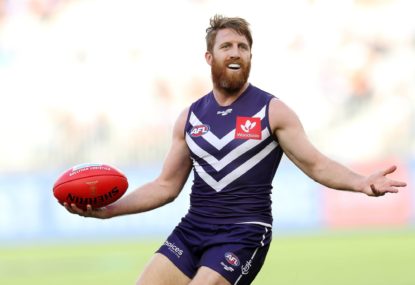