It makes me uneasy when any Doug, Dick, or Harry charges to the lead of an international running race from the gun, only to saunter off the track after a lap or so.

They’re called pacemakers, but the practice has the ring of chicanery. That’s why I’d rather call them performance-enhancing Dougs (or Dagmas).

From my narrow point of view, they lend as much dignity to the race as a streaker. And if they’re going to receive the attention of a streaker, maybe they could go all the way in that direction instead.

I’d rather watch runners who can make up their own minds about pacing. Isn’t that part of the intrigue? If we want to watch athletes chase a lure, surely a trip to the greyhounds would do.

It would be troubling enough if a sense of mild indignation was all there was to it. But I genuinely wonder if performance-enhancing Dougs have the desired effect anyway. And athletics history has its own tales of pacemakers abrogating their responsibilities. Some have left their ‘opposition’ for dead at the start, and instead of pulling the designated pin, stayed the entire course.

In the 1994 Los Angeles Marathon, Paul Pilkington was reportedly paid good money to set the early pace and then bail. But his intended cronies were so far behind by halfway that he kept going and pocketed the $27,000 for winning.

Such an aberration might also pitch questions about Pilkingotn’s self belief and competitive ethic. Why would he not have entered the race to win? Did his early pace shock him into some realisation about his abilities? And why had he not honoured his part of the bargain? (Sport should be in earnest, but not cut-throat.)

But then, form can be an elusive thing. On any other day his body might have relished the chance of an easy out, but perhaps on that fine day he just couldn’t hold it back. Dilemma, dilemma! I’m guessing he was decent enough to refund his pacemaker fee.

It strikes me as odd that elite runners are thought so bereft of inherent pacing ability that they should benefit from a pacemaker, as if they are being condescended to. If it were not such a convention, I’m sure their natural response might be to judge it a distraction.

From time to time, athletics authorities make noises about banning the practice. Such sentiments can get off to a roaring start, but after a few laps the debate seems to limp quietly to the side. Funny, that.

Perhaps it’s because one of the most revered accomplishments in athletics history (Roger Bannister’s four-minute mile) was Doug-assisted that pacemakers are still tolerated. Maybe they’re a way of enshrining that legacy.

I haven’t been able to establish if the Rio Olympics will be Doug free. I’m hoping they will.

This is what sport is all about! 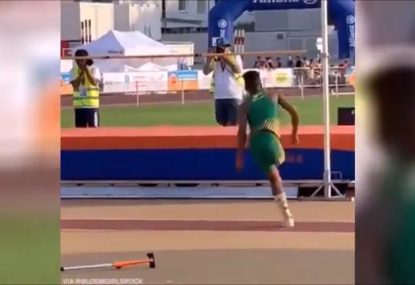