Everyone loves a rating out of 10 on the day after a State of Origin, but every decent media outlet and moderately successful rugby league website and pundit will have the players ratings. Why not rate the people who make the reap the rewards of the TV ratings.

Having become a Fox Sports snob since the pay TV provider was allowed to cover all NRL this season, the State of Origin was always circled as the time where I’d have to come back to Channel Nine to sample the big clashes. And wasn’t I looking forward to it.

Sure, we could have avoided the game and the result and hooked into the Fox Sports coverage at 10pm (and it was tempting but later found out it still featured Channel Nine commentary.,so lucky for us we didn’t wait) but some sleep is required for a midweek at work.

Was it as bad as we thought it had become in the pre-Fox Sports era? The ratings are below, for the coverage and commentators that is.

Couldn’t be arsed as I knew from previous year it would be full of clichéd slow mos and other rubbish. And the wheeling out of that great Queensland junior club Bowraville Tigers under Greg Inglis’ name, as he somehow keeps a straight face as he announces it. That is if they still do that. Don’t forget the plethora of ads and endless The Voice promos too, but that is expected on commercial TV. It gives you the Madden brothers and Delta to distract you from your distaste for the commentary team.

Having guessed correctly that the actual kick off would be 8:23pm we can’t rate something we didn’t see.

From the word on the Street on social media, it may not have scored much higher than N/A.

The coverage can be summed up by the start and the finish. First up, courtesy of Spider cam, we missed all the excitement and impact of Origin’s first tackle/hit up, always of the great moments of any series. And to cap it off, with NSW attempting a short drop out to win the ball back quickly in the dying moment, apparently Dane Gagai pulled off what Gus described as “one of the moments of the night”. How would we know? Nine were still showing a replay of the previous moment.

On more than a few occasions they appeared to be unable to keep up with the game, and overall there was too much of the over-hyped Spider Cam which adds as much to State of Origin as Dylan Walker. Given they couldn’t keep up with such a slow game, it must be slightly worrying for them.

At least other commentators don’t hide their allegiances. Rabs barely got out of first gear when Queensland did anything, yet found another level of more for when NSW threatened to do something excitement. Always keen to point out any negative in Maroon, and equally quiet when a NSW 50-50 goes their way.

Rabs has been great, and a true great of Australian broadcasting, but he hasn’t been great for a while now and Channel Nine really need to look to a new Voice. Not that kind of Voice though. Nor Ray Hadley’s unless they want to really annoy league fans.

A voice of reason, and by far the best in the box. They simply don’t allow him to talk much, or enough in our book. Sure you know he supports NSW, but given his additions to the coverage you would barely know.

We also now know he hits a nine iron that sits down on the green.

Gus must be getting sick of sitting though a Queensland victory, and does well not to lose it completely. He has plenty of good to be said, and most of it is the most common of sense. The routine with Rabs like two ladies arguing over the 161 Bus is getting tedious, but wasn’t so bad tonight.

A surprise addition given he’s been on the outer on game day for a while, or have I just not noticed him in the box this year with my Fox Sports snobbery, but still so superior to the dross or white noise on offer from Wally Lewis. Still unsure why we need to have a Queenslander just to even it up, just have the best commentators and be done with it. Or in fact why they need four in the box plus a cast on the sidelines.

He was too quick to not sound too much in favour Queenslander to attempt to look partial.

Rarely do you hear anything worthwhile. Great when we flash to a shot of Freddy talking instead of what’s going on. And of all the retired players who have tried to get into the media, di Brett Finch really put forward the best edition?

May have rated this section higher, but those half time interview with players coming off for half time that asked and receive the most clichéd questions need to go. Leave them alone and let them get off the field. The questions add zero to the coverage.

Went to bed as soon as I had served my time under Channel Nine. No need for any more analysis, promos or Brad Fittler until next time.

It is easy to criticise Channel Nine, especially if you have been treated to Fox Sports coverage all season, but they make it so easy to do so, and it doesn’t seem to be getting any better.

Put it into perspective though, it could be worse. It is only 3, three-hour broadcasts a year. Come the summer, there’s endless days of drivel from the very worst sporting commentary team in Australia.

Back to Fox Sports for us snobs for a few more weeks then. 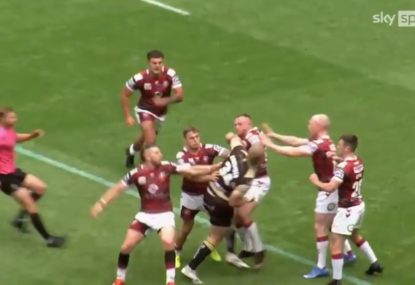