Women’s rugby is having a strong year, and more new ground was covered yesterday when the ARU announced Buildcorp would be the first ever naming rights sponsor for the Wallaroos and the women’s national championship in June.

Buildcorp principal Josephine Sukkar, with her husband Tony, have been long-time supporters and financial backers of women’s rugby in Sydney.

Sukkar said she was excited to partner with the national team. She has big goals for corporate support of the Wallaroos and hopes Buildcorp’s early example will be matched by other businesses run by rugby fans.

The women’s national XVs tournament will be played at Riverview in Sydney on June 24-26. From there a Wallaroos team will be picked to play three matches in New Zealand. One of those fixtures will be a historic men’s and women’s double header at Eden Park coinciding with the Bledisloe Cup.

ARU CEO Bill Pulver said the sponsorship comes at an important time with a women’s World Cup looming in 2017 but also fits the broader strategy for the game in Australia.

“The vision we have for Australian rugby is to inspire all Australians to enjoy our great global game,” he said.

“The fastest growth we’re going to have in the game is in women’s rugby. If you normalise the role of women in rugby and they represent 50 per cent of your playing group it’s huge growth.”

Currently 26,000 women play rugby in Australia and Pulver said the aim is to increase that to 52,000 participants in four years.

The ARU has shifted its focus to growing the women’s game under Pulver’s watch, but he is quick to deflect praise for that decision and said all levels of rugby understand the importance of broadening rugby’s appeal.

“I’m not going to take the glory for myself personally… I’m in regular contact with the state unions and Super Rugby clubs and club rugby. Everybody gets the point that women represent a great growth opportunity.”

When pressed on whether a national competition for women’s XVs would be on the cards, Pulver said the pathway from club to state level with a national tournament and then the Wallaroos was clearer than the sevens format currently, where there is a strong global circuit but not as much in Australia.

“We would like to, in due course, probably 2017, launch a national women’s sevens series and a men’s national sevens series a year later,” Pulver said calling this the “immediate objective” of the ARU for women’s rugby.

He was also very bullish on the prospects of the women’s world series coming to Sydney at the same time as the successful men’s event during the summer.

“We are well down the line with World Rugby for making that happen. It hasn’t been announced yet but I’m confident we’ll get it,” he said.

Sukkar started supporting women’s rugby with her husband when the Sydney University women’s rugby club called about nine years ago canvassing for sponsorship.

“They asked if we could sponsor them and I didn’t even know they had a women’s rugby club,” she said.

“I was actually so ashamed I didn’t know they had a women’s team.”

Sukkar said the support for strong and seriously dedicated women in XVs rugby isn’t yet where it should be in Australia, citing last year’s Sydney club grand final experience.

“It was at Seven Hills on the most ordinary park, brown grass and no scoreboard – this is how we treat women’s rugby. It was embarrassing.”

She would eventually like to see a women’s NRC form around the current men’s competition, meaning grounds could be shared to lower the barrier for entry to women’s teams and a guaranteed spread of teams around the tournament.

Sukkar said the immediate improvement of the national women’s sevens team after their support levels allowed them to become professional athletes was all the evidence needed to prove commercial was needed to help the women’s game reach its potential.

But right now she has another immediate aim for Wallaroos support, above and beyond the Buildcorp naming rights announcement.

She wants to raise the $200,000 needed for the Wallaroos to tour the northern hemisphere in preparation for the World Cup next year. She is calling on 20 companies run by rugby lovers to put in $10,000 each to try and give the Wallaroos the best preparation possible.

“I’ve said they have to play in the northern hemisphere environment before the World Cup in Ireland,” Sukkar said.

So, business leaders, get in touch with Josephine Sukkar if you want to help the Wallaroos put their best foot forward at the next World Cup.

The Wallaroos will be back in action as they take on New Zealand’s Black Ferns in a Bledisloe Cup curtain raiser. This is The Roar’s guide to streaming the match online, or watching it on TV.

Australia’s Wallaroos have launched their international season with a 34-5 win over Japan thanks to a dominant second-half display in Newcastle. 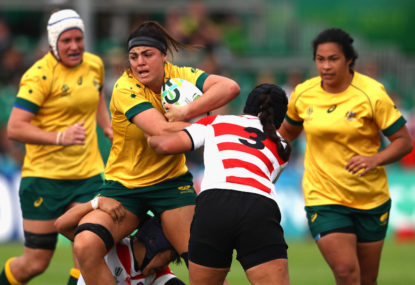