Collingwood fans hoping to counter the cold weather on Friday night with the collective body heat of 80,000 members were left wanting.

Only 20,320 spectators showed up to watched a dour but rare win over Fremantle at the MCG – the lowest black and white crowd at the venue since 1940.

Melbourne enjoys boasting about its status as the ‘sporting capital of the world’ and of course being the location of the colosseum that is the Melbourne Cricket Ground. It’s the ground that pushes 100,000 spectators at the biggest sporting events in the country, whether it be football, cricket or even the rugby codes.

Despite the huge figures at big events, Victorian sports fans – football fans in particular – should take flak for being as fair weather as any in the country.

Friday’s game, despite its favourable time slot, contended with enough variables for it to be an anomaly. These variables included bad weather, transport interruptions and as much hype as a mid-table Premier League match in May.

However, fan engagement has been on the map for years in the AFL, particularly in Victoria. Gillon McLachlan focused on fan engagement in his first year as CEO, pledging to reduce the price of food at games, and bring back post-match kick-to-kick.

Despite McLachlan’s efforts, fan engagement remains an issue. Rohan Connolly in The Age contended that Victorian crowds have dropped off as a result of modern TV coverage. But the answer lies not with the television audience or even the strange disdain among fans for the state’s smaller venue, Etihad Stadium.

No, the reason for dwindling crowds is simply that fans of the traditionally big teams don’t show up when they’re losing.

No matter how much supporters like to rib their rivals for fairweatherdom, Victorian fans, particularly the traditional ‘Big 4′ teams – Carlton, Collingwood, Essendon and Richmond – can’t escape falling attendance when the team is out of form.

The chart below demonstrates a strong correlation between the team’s form and the crowd numbers. 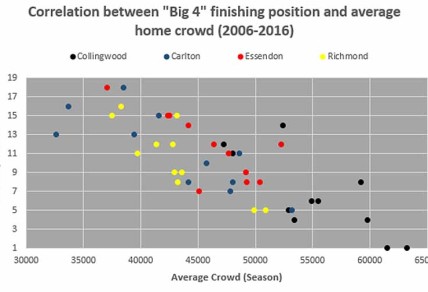 You might be thinking: “Duh. Of course numbers drop off when the team isn’t doing well.” But that’s just the point – Victorian fans shouldn’t need to hide behind the typical excuses of playing at the maligned Docklands or blaming the AFL because they didn’t want to watch their team play out a probable dead rubber.

The year Victorian crowds peaked was when the Big 4 had its highest mean finishing position in the last decade as Collingwood, Essendon and Carlton all made the top eight No surprise this year that as the finals hopes of all four teams have disintegrated, that Victorian attendances as a whole are headed for a decade low, only slightly scraping above the previous low 2014 figures halfway through the season.

With all early season hope faded, the number will only get lower.

It might be time to say that there’s less wrong with the AFL’s administrative decisions and their impact on fan engagement, and more wrong with the footy being played by the teams with the biggest fan-bases.

It’s not too hard to suggest that if the Big 4 teams were currently flag contenders, then attendances would skyrocket as large numbers of dormant fans would be flock to see the spectacles.

Sport lives and dies by its entertainment factor and the emotional engagement of fans. When three out of the four traditionally large supporter bases in this state have faced over a decade of negative emotional payoff and mostly dour performances, it’s easy to see why people have stayed away.