Finally, something has gone right on the signing front for the Gold Coast Titans. They have globetrotting superstar Jarryd Hayne’s signature on paper, and he can’t take it back.

He’s there for two years, on a deal reportedly worth $1.2 million a season. That’s a lot of moolah.

But seeing as Daly Cherry-Evans backflipped on his signed contract last year, also leading to the Titans releasing half Aidan Sezer who’s having a blinder of a season at the Raiders, it is about time the Gold Coast had some good news.

Jarryd Hayne is more than good news, because with new halves Ash Taylor and Tyrone Roberts performing very well, and the forward pack in great form, Jarryd Hayne adds a lot of star power at fullback.

Here are five of the big questions about Jarryd Hayne’s signing with the Gold Coast Titans.

Are the Titans now a top four side?
The Sharks were on a 15-game, repeat 15-game, winning streak before they ran into the Titans on Monday night.

In what was a tremendous game, the Titans led 18-12 before Andrew Fifita crossed for the Sharks to draw them level. No one could finish the game with a field goal, and the game finished in an 18-all draw.

It’s all hypothetical, but I say yes, absolutely he does.

The Titans are now a massive top four chance due to this signing, along with the exceptional form of their young halves and powerful and skilful forwards.

It’s the biggest deal in NRL history – is Jarryd Hayne worth more than Johnathan Thurston?
From a marketing perspective, Jarryd Hayne is more valuable than any other player in the NRL.

Kids love him. Adults love him. He’s travelled the world and succeeded in the NFL, despite almost everyone saying he wouldn’t.

Johnathan Thurston is a brand too, and will no doubt go down as a better rugby league player than Jarryd Hayne in the annals of history and the minds of the true fans.

Hayne will be earning more than Thurston, Inglis, Slater, Farah, Smith – some of the greats of the modern game.

But when it comes to marketing, the true fans aren’t who you need to reach. It’s those on the fence. It’s those who don’t attend their team’s match every week. How many people will now become Titans fans because Jarryd Hayne is there?

Because when Hayne is there, you don’t just buy his services, you buy his brand, his 470,000 Facebook followers, his 211,000 Twitter disciples, the 485,000 Instagram who check out his high-protein diet.

You buy Brand Hayne, and in terms of marketability that’s probably more valuable than Brand Thurston. 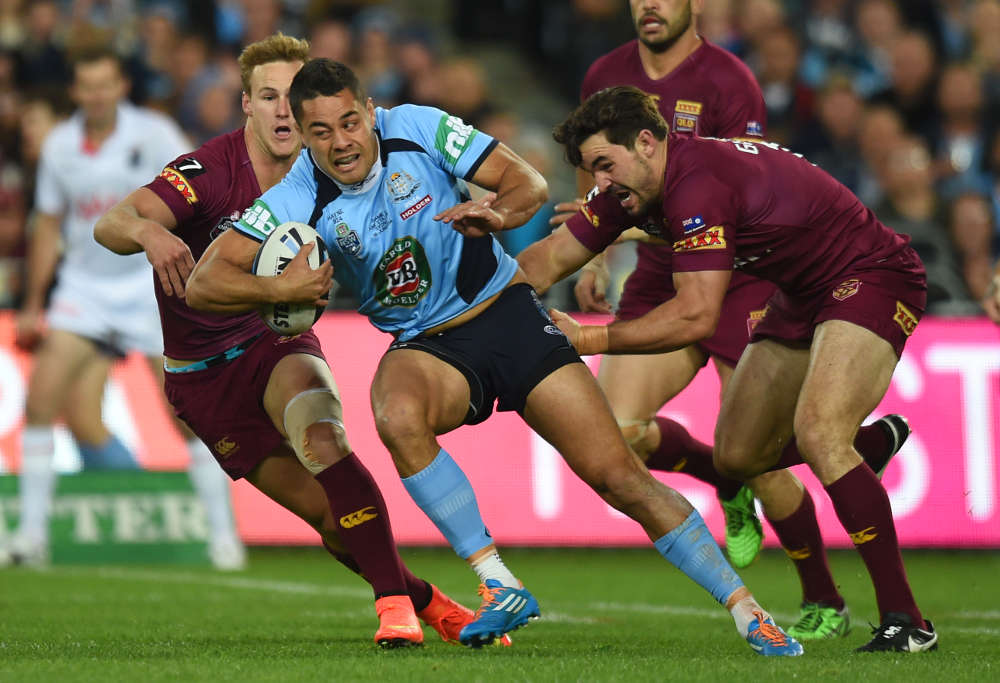 Why did Jarryd Hayne renege on his verbal commitment to the Eels?
Why wouldn’t he?

Let’s face it, the Eels have a bunch of loose ends to tie up before they can offer Jarryd Hayne any sort of deal.

With Kieran Foran still on the books, there’s no money left in their cap. And why would the offload more players, other than Foran, to get Hayne? Simply, there’s not much money left at Parra, evidenced by how hard they’ve had to work just to balance the ledger this year.

With $400,000 more on the table in his two years at the Titans, why wouldn’t Hayne push his own agenda here? He can play for a club on the rise, rather than one currently in the pits.

I don’t blame him for choosing the Titans at all.

When will he be on duty?
We’ve heard that Hayne could be taking the field as soon as this weekend.

Word coming out of the Titans is that with no restrictions on player movement anymore (anyone remember the June 30 deadline?) they want him around as soon as they can. Titans CEO Graham Annesley confirmed he’s available for selection.

I would love to see Hayne out there this weekend, maybe making a cameo off the bench. He won’t be carrying too many niggles, having had a couple of months off after not making the Fiji sevens squad for Rio.

Let’s see him out there this weekend, and watch the Titans push for the semis!

How did the Titans fit him under the cap?
Easily, would be the simple answer to that question.

There’s no doubt they had plenty of cash reserved for Aidan Sezer, who’s no longer at the club. They also offered Daly Cherry-Evans a million a season, and he’s not there, so they’ve got at least that in reserve. They also lost Nate Myles, who would have been on reasonable coin.

With a squad made up of ageing stars, journeymen and prodigies, the Titans have heaps of room to fit a superstar of Jarryd Hayne’s hefty salary requirements.