Recent form
It’s an odd thing to say about two teams with only four wins between them in the last two months, but what a fascinating game we have in the offering.

For both clubs this presents a huge opportunity to get their season back on track after some woeful displays.

July was a singularly unpleasant month for St George-Illawarra as Paul Macgregor’s team lost all four games played. While they somewhat improved against the Bulldogs last Friday night that improvement came only after humiliating losses to the Tigers, Titans and Sea Eagles.

Those were games where the Dragons were poor and took the team from a semi-comfortable spot on the fringe of the top eight to a position where a win is almost mandatory if they are to stay alive for September.

For the Broncos meanwhile, the malaise goes back even further with only two wins since the start of the representative period and one of those coming over the awful Rabbitohs.

After beginning the season as premiership favourites and living up to that for ten rounds the Broncos have now fallen from the top of the ladder down to sixth and they are now in danger of squandering their opportunity to host a home final or secure a double chance, if not miss the finals altogether

They too must start winning again very soon to rescue season 2016.

Starting with the home side and eagle-eyed readers will no doubt notice that Tyson Frizell is named despite his suspension – this is because at the time of writing it was unknown who would replace him in the starting lineup.

Another change for the Red V will be the absence of Joel Thompson, also through suspension, and the inclusion on the bench of Tyrone McCarthy with Will Matthews promoted to the bench.

Finally for the Dragons, Mitch Rein is named to start at hooker though it remains to be seen whether Coach Paul Mcgregor might wheel out the same bait and switch with Jake Marketo starting like he tried last weekend.

Marketo did a commendable job at dummy half but it seems like a waste of a solid running forward to use Marketo for only the first 22 minutes then sit him for the rest of the game.

For the Broncos there are a number of very welcome changes in the forward pack as Sam Thaiday and Matt Gillett return at the expense of Jo Ofahengaue and Jaydn Su’A.

Meanwhile, Alex Glenn has been relegated to the bench with Thaiday injected straight into the starting side.

What to watch for
One Dragons forward in particular has been making a very strong contribution in recent weeks – Russell Packer. He has eased back into first grade this season and after beginning the season as the starting prop, it was actually a four game stint between rounds seven and ten coming off the bench that appears to have ignited Packer’s season.

Prior to that, Packer was averaging a solid but not spectacular 83 metres per game on an average of nine carries. Since round seven though he is contributing a far healthier 114m on 11 carries, numbers that would look better if we removed a round eight outlier against the Roosters when he only carried the ball five times for 53 metres.

But Packer’s contribution in recent weeks has gone beyond the improvement in his raw running metres. In a team that we know has been desperately short on playmaking and creativity, one key contribution from Packer has been his prolific offloading.

Whilst Packer only has 14 offloads for the season, seven of those have come in the last three games, with four against the Bulldogs alone. This is invaluable for a team that is only mid-pack in offloads and at or near the bottom of all the other creative statistics.

Of course simply offloading the ball is not necessarily a virtue.

The Cowboys and Broncos for instance both generally eschew the offload. Not all offloads are created equal and as with anything else it is quality vs quantity. Against the Bulldogs though, Packer got it just right with late offloads to poised teammates.

This next trio of images shows the value of a late offload. In our first image we see Packer, already falling to ground under the attention of two tacklers slipping the ball out the back to the waiting dummy half Jake Marketo 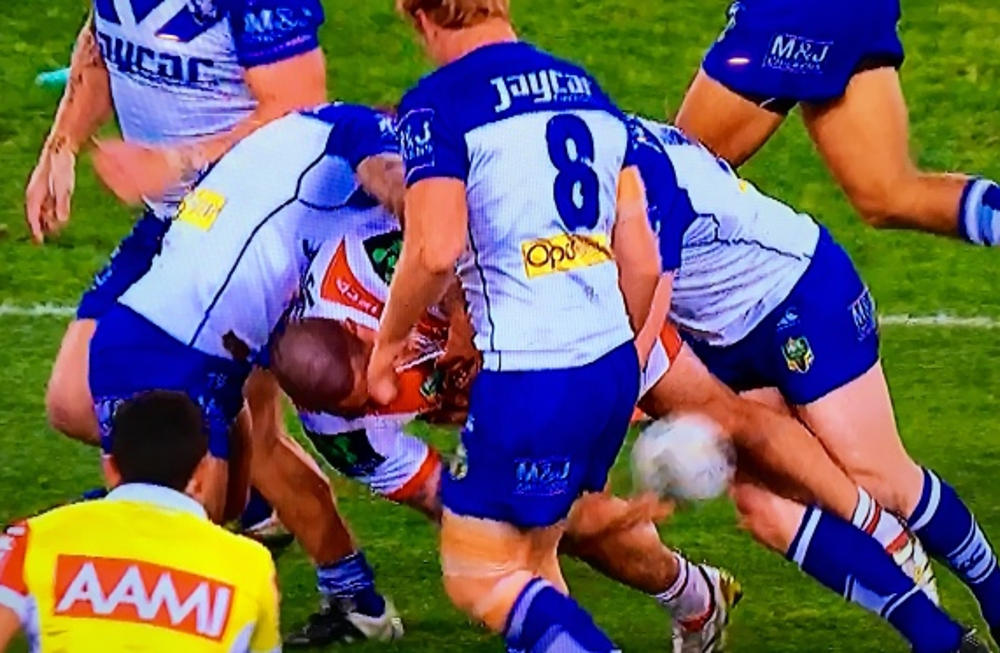 Taking advantage of the broken field Marketo then darts up field, making well over ten further metres after Packer had already made 10m before and during contact. We can see here the distance travelled by Marketo with Packer visible on his haunches in the upper right of the image 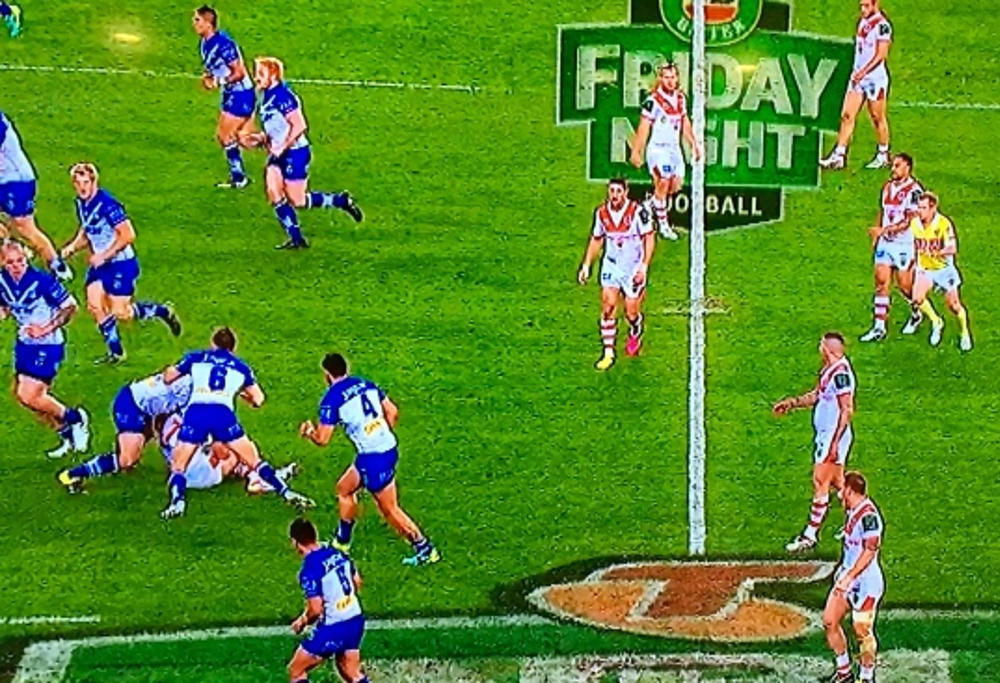 We can also see the Bulldogs players are still well behind the play as a result of being forced to retreat then come up again after Packer’s offload. This then provides an opportunity for the Dragons to peel off another huge chunk of territory next play with the next play the ball near the 30m line. 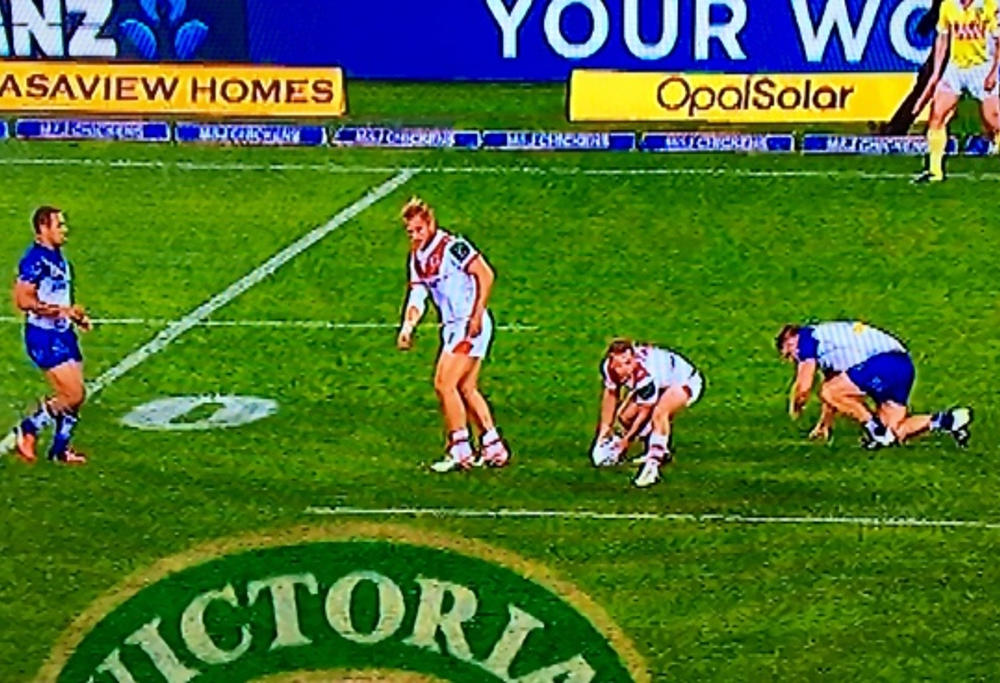 All in all Packer’s offload generated nearly 30 metres in offence for the Dragons from where he first took the ball, turning a routine set into an opportunity for an attacking play. Naturally, the Dragons squandered it but one man can only do so much.

On a subsequent play Packer went even closer to generating points directly after Marketo took another very late Packer offload from the Bulldogs 20 metre line to within centimetres of the try line.

It is no secret that the Dragons this year have struggled to score points, but with players like Russell Packer creating opportunities via offloads surely at some point the team will score in spite of themselves?

Moving on to the Broncos and as previously described this is a team in a deep slump. Whilst there are a lot of elements that go into that slump, a lot of it can be put down to the drop off in production from their forward pack as injuries, suspensions and Origin duty have started to bite.

Adam Blair and Josh McGuire started the game in the front row. Matt Gillett and Alex Glenn patrolled the two edges and Corey Parker rounded out the middle unit at lock. On the bench they found solid contributors Jarrod Wallace and Jo Ofahengaue along with veteran Sam Thaiday.

However, since then they have been forced to call on a raft of new players to fill in for the older, more experienced players as various members of the pack either got injured, suspended or were called into Origin camp.

While there is little doubt that players such as Jai Arrow, Jaydn Su’A and Tevita Pangai Jr have big futures ahead of them none have impressed on a consistent basis. While each of them has played well at times, replacing elite, Origin and New Zealand internationals, simply doing quite well is never going to be enough.

Indeed of the three only Su’A is averaging over 80 metres per game which puts him behind all of the first choice forwards except Ofahengaue, who was used sparingly by Bennett in the early rounds.

This is to be expected for a trio of young forwards.

Most people agree that the step from reserve grade, whether it is Queensland Cup or NSW Cup, or under 20s is challenging enough but it is especially difficult for power running forwards who, for much of their football lives, have enjoyed profound physical advantages over most of their opponents.

Anyone who watched Pangai cannonballing through defenders as part of the Raiders dominant 2013 under 20s team knows the sort of profound size and power advantage he possessed in lower grades.

However in first grade everyone is big, strong and fast and whilst he and the others have shown glimpses they have yet to make the sorts of adjustments to their games that they will need to develop if they are to survive at this level.

In the short term though the whole Broncos team has suffered.

It has all been compounded by injuries in the backline as long-term injuries to Jack Reed, Jordan Kahu and Lachlan Maranta have forced further chopping and changing at times.

Tonight however, the cavalry will finally arrive as Origin stars Gillett and Thaiday return. The return of two such critical players will make a huge difference for the Broncos but will those two players be ready for the intensity of what has now become a critical game for the team?

Watch closely tonight and if the Broncos forwards are indeed returning to ascendency then the team has a chance, if not the team could be in deep trouble.

First try scorer – Corey Oates
After a blazing start to the season, Oates has been noticeably quieter in recent weeks. Indeed after nine tries in his first eight games this season Oates has scored only three more in his next eight club appearances.

However this slump aside he remains a gigantic lad with remarkable speed for his size and deft finishing skills. If the Broncos forwards can lay a platform in the middle you can bet that the halves will look to find Oates on the flank again as they did so efficiently in the early part of the season.

Prediction – Dragons
While the Broncos remain heavy favourites with the bookies and the Dragons have hardly been great recently I’m going to take the risk and tip the Dragons tonight.

The Broncos simply can’t get out of their own half at the moment, whilst the Dragons showed in the second half against the Bulldogs that they do still have some fight left in them.

With the exception of the Rabbitohs game two weeks ago the Broncos have been in utter tailspin since early June.

The return tonight of their representative forwards will go a long way towards returning the team back to competitiveness but the Dragons also have a strong forward pack and should be able to draw even in that phase of the game (though the loss of Tyson Frizell to suspension hurts the Dragons badly in this regard).

This is likely to be a grinding affair as the Broncos try to claw their way back to competitiveness and the Dragons cling on to the fringe of the eight.