The Roar's NRL expert tips and predictions: Round 23

Ladies and gentlemen, welcome The Roar‘s NRL expert tips for Round 23 or as I would like to call it, ‘Back to the Future Round’.

After watching St George Illawarra versus Brisbane and then Parramatta and Manly-Warringah to kick-off last week’s round, your writer was in desperate need of a bottle of Xanax, Jack Daniels, a tub of Blue Ribbon and Marty McFly’s phone number.

I thought that perhaps, if I reached out to McFly and ‘Doc’, they could help me travel back in time when free-to-air primetime matches were actually, get this, worthy of primetime.

When a Dragons/Broncos showdown meant Anthony Mundine versus Kevin Walters or 1993 Gorden Tallis versus 1998 Gorden Tallis (hey, it’s possible in Back to the Future!)

At the very least they could take me back to last Thursday at around 7.45pm so I could have at least found something else to do.

We may all need McFly and Doc’s help after Thursday night too when Canterbury host the Sea Eagles at the presumably empty ANZ Stadium. Or even the following night where the Brisbane Broncos could put a cricket score on the Parramatta carcass.

As bully Biff Tannen says, “Why don’t you make like a tree and get outta here!”

“Broncos to beat the plucky Eels up at Suncorp. By how much depends on whether their halves can remember how to play footy.

“Jarryd is going home to Minto and – as his touching up of the ref was considered inconsequential – he’ll be playing and he loves a big stage. Titans to win.

“Match of the round is on Monday night and the Raiders will manage to just edge the Storm to keep their bandwagon rolling.”

“With a loss against the Parramatta Eels last weekend, it seems as though the Sea Eagles finals chances for 2016 are all but done. Meanwhile, the Bulldogs find themselves in a top four with the Cowboys nipping at their heels. With that in mind, I am expecting the Bulldogs to win this game and comfortably.

“Watch the Wests Tigers win four in a row. With Moses growing in confidence each week and James Tedesco in scintillating form, I predict that Hayne’s return to Campbelltown will not be a happy one.

“I would love to tip the Knights here, but I cannot. Nathan Cleary has been an absolute revelation this year and this Panthers team will glean plenty of confidence from their thrashing of the Roosters. With a top eight position well within their grasp, I expect the Panthers to continue the march to the Finals.”

“The Warriors were superb in ruining Jarryd Hayne’s Titans debut and while the Rabbitohs showed plenty of fight in Melbourne the Warriors should win at home.

“Dragons are another team that showed signs of life against the Broncos but with a Sharks team eager to bounce back after a home loss the Dragons likely won’t have enough firepower.

“The Roosters were truly awful on Monday night in the absence of Mitchell Pearce and Jared Warea-Hargreaves. Even with those players back they will struggle against the Cowboys.”

“The biggest 3pm Saturday match of the season – bring back Warren Boland and the ABC team. Jarryd Hayne will have a say in the match but I don’t think it will be enough. Wests Tigers have momentum and should win at home.

“You know what? The Cowboys aren’t travelling that well. It will take a minor miracle but if the Roosters can find some testicular fortitude, they can worry the Cowboys.

“Canberra and Melbourne is going to be a huge clash but I think if it’s tight, as most are predicting, the class and polish of the Storm might see them home.”

He made a flying try in the corner look effortless! 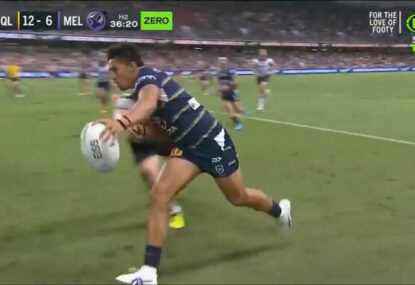 The Cowboys have underlined their Premiership credentials with a crushing 36-6 win over the Melbourne Storm and announcing themselves as a real threat for the title. 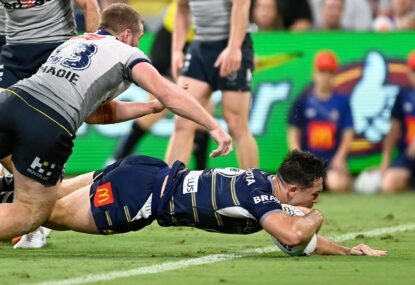