The Roar’s NRL Thursday Night Forecast series is back where this week we will look at the Bulldogs, s in the thick of the fight for a top-four finish, and the Sea Eagles, with finals hopes all but extinguished by the Eels in a tense Friday night clash last week.

Recent form
After a disappointing foray into North Queensland in Round 20 the Bulldogs have bounced back with solid victories over the Dragons and Knights over the last two rounds.

Overall the team is travelling very well having won six of their last seven matches, with only the ignominious performance in Townsville to blot the record.

That surge, along with a drop off in form from the two Queensland sides, has seen the Bulldogs vault into a four-way scramble with the Cowboys, Raiders and Broncos for the two remaining top-four positions behind the Sharks and Storm.

However with the Broncos and Cowboys both still to come on the schedule for Canterbury the team must ensure they capitalise on this game and their final round match against the Rabbitohs.

For the Eagles meanwhile the fight is very nearly over with last Friday’s disappointing loss to the Eels leaving the team with virtually no path to making the eight. The team is now four points behind the eighth placed Tigers and needs both a perfect record themselves and a lengthy series of results to go their own way to have any chance.

It has been a season of fits and spurts for the Northern Beaches side with the recent three game winning streak undone by a frustrating performance against an undermanned Eels side. A key part of the team’s inconsistency has been the team’s unlucky injury record with constant reshuffles being required. This been especially true in the backline where nine players have appeared in the five outside back positions and no player has more than 13 appearances in the same position.

In a team adjusting to a new coach and adapting to the loss of an international half it was always going to be a challenge to form strong combinations. But the team’s injury toll has made it incredibly difficult for the team to display any sort of consistent form.

Starting with the home side and there are no changse to report as Coach Des Hasler picks from an almost full strength squad. Only backrower Greg Eastwood is currently unavailable. He’s expected to be back in the next week or two; exactly the sort of health report a coach wants heading into the final rounds of the season.

For the Sea Eagles however there are a number of changes. The return of Jamie Lyon in the halves allows Dylan Walker to move back to his strongest position at right centre with utility Lewis Brown shifting back to the bench.

There have also been changes in the Manly forward pack with Martin Taupau shifted from the front row to the left edge while Addin Fonua-Blake gets promoted from the bench to the starting prop role. Nathan Green shifts from the back row to the bench and Blake Leary drops out after he was used sparingly in Parramatta.

What to look for
This week in what to watch for we’re going to look at the two opposing fullbacks tonight Will Hopoate and Tom Trbojevic. They are two players who are steadily growing in influence and importance for their respective teams.

Will Hopoate joined the Bulldogs at the start of 2016 after two largely disappointing seasons at the Eels.

While a measure of rust was to be expected after Hopoate re-joined professional football after undertaking a two-year Mormon mission, he was both scratchy for the Eels on the field and also reported to be eating up a large chunk of the Eels salary cap.

As such there was little disappointment from Eels fans when the club effectively traded out Hopoate for Michael Jennings in the great centre-go-round of summer 15-16.

I say centre-go-round because for most of his Eels career that is the position that Hopoate played with only a six game stint at the start of 2015 at fullback. Hopoate’s solid but not spectacular form in the position, plus the presence of a comparatively good fullback in Reece Robinson led to the quick abandonment of that approach.

However with Brett Morris out injured at the start the season, Hopoate was given an opportunity to shine at fullback by Hasler and it is fair to say he has been much more impressive in the role this time around.

A big key to his success at the start of the season was that even as he adjusted to the broader responsibilities, in both attack and defence, of the role he was also scoring regular tries with one per game for the opening five rounds. While a fullback’s job is much bigger than just scoring tries it certainly made it easier for Hasler to persist with Hopoate to be able to point to his try scoring as a key contribution.

However that is not to say the Hopate hasn’t contributed as a ball player as well. Indeed Hopoate’s four try assists and six linebreak assists may not be extraordinary for a fullback they do represent an improvement on last season in which he recorded only three try assists and four line break assists to go with a paltry three tries.

Hopoate may not at this stage be either a dominant running threat nor an elite ball player but he is most definitely above average in both of those categories and remains a vital foil for starting halves Josh Reynolds and Moses Mbye.

Switching to the Eagles who have an even younger, and perhaps even more impressive fullback prospect than Hopoate.

How wonderful it must be to be a Sea Eagles fan. After many years enjoying the Stewart brothers the club has produced two outstanding replacements in the brothers Trbojevic.

While older brother Jake has settled into a role as the defensive anchor of the team, Tom has bounced around the backline in 2016, playing at fullback, on the wing and in both centre spots.

However having now played three consecutive games at fullback and with rumours continuing to circulate that Brett Stewart will not be at the club in 2017 it seems clear that Trbojevic is the fullback of both now and the future for the Eagles.

It is fair to say that Trbojevic is enjoying the continuity at the position having produced three outstanding displays against the Rabbitohs, Knights and Eels in recent weeks. Over the course of those three games Trbojevic has averaged 175m per game, made ten tackle breaks, set up two tries and scored one of his own. These are figures which, if extrapolated over the course of a 24 game season would put him among the best contributors at fullback in the competition.

However the most exciting part for Eagles fans about the last three matches from Trbojevic has been the rapidly growing maturity of his game. Right before our eyes Trbojevic is growing from an extremely gifted ball runner into a far more rounded run-pass threat in the mould of some of the best all-around fullbacks in the game.

This next set of mages shows a great example of Trbojevic taking on a playmaking role. As we pick up the play in this first image the Eagles have got a quick play the ball about 25m out from the Eels line. Despite the presence of Daly Cherry-Evans in the area Trbojevic has leapt into first receiver and is clearly showing intent to run 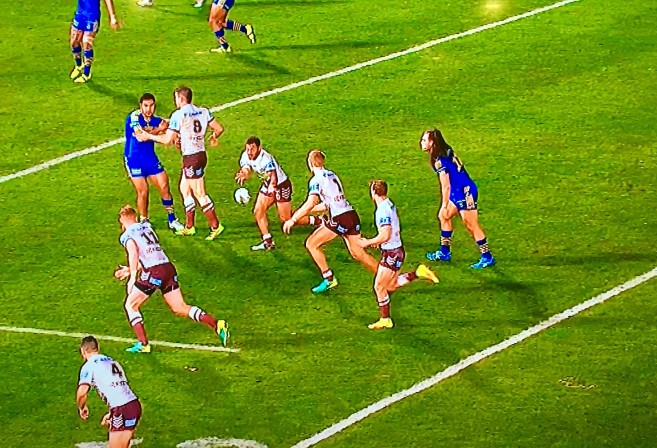 Run he did, quickly taking the ball up over the 20m line before unfurling a magnificent pass for centre Brayden Williame to run onto. Not only is this a superb cut out ball across the face of second rower Nathan Green we can also see Beau Scott has been drawn in by Trbojevic’s run and is already scrambling to get back across to defend on the outside. 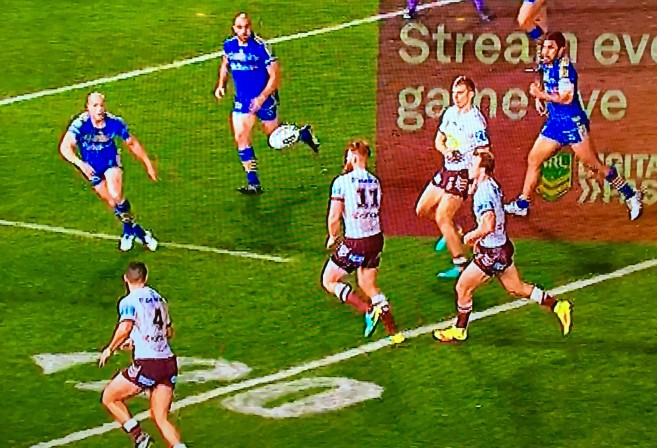 In the final image we see the situation that Trbojevic’s quick thinking has created with Williame having drawn in both the centre and winger and now in great position to pass the ball on to winger Jorge Taufua to score easily in the corner. 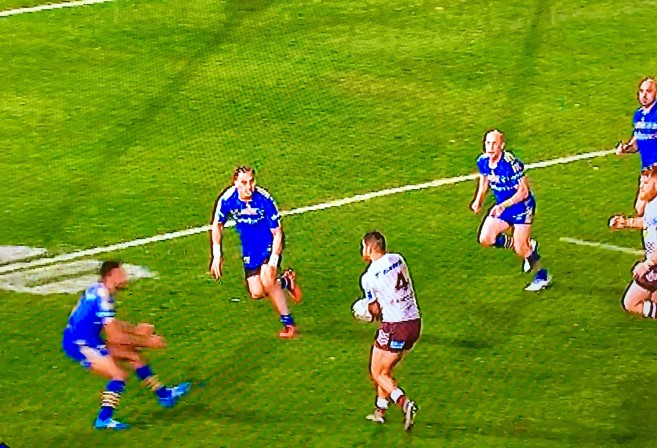 What actually happened of course was that Williame grassed the pass well behind Taufua and the ball went harmlessly out of bounds.

However the poor end result is largely irrelevant. Except for winning that particular game of course. That might have been handy.

But the point remains that even as time runs out on 2016 the rapid development of Trbojevic is giving Manly fans something not only to watch now but also something to look forward to for years to come as Tommy Turbo becomes ever more important for their future.

First try scorer – Tom Trbojevic
While the section above highlighted Trbojevic’s burgeoning role as a playmaker, he is blessed with a magnificent running game with a rare blend of balance and surprise power. Much like a younger Josh Dugan, Trbojevic seems to power through far more tackles than his relatively thin physique would suggest. I’ll take him to do just that this evening.

Prediction – Bulldogs
With far more to play for and a team that is, on paper at least, superior and less injury affected it is hard to go past the Bulldogs in this one. Certainly the Sea Eagles have the talent and capacity to cause an upset but I’ll take the disciplined Bulldogs execution over the as yet unformed combinations of the Sea Eagles.

There is no doubt the Sea Eagles are building a potential powerhouse for next season and beyond but with finals hopes effectively extinguished it’s hard to see them winning this one.

You can read the NRL Forecast here every week or check it out along with more great rugby league analysis on Lachlan’s website Back the Ten.