Size matters: Are the Jazz the biggest threat to the Warriors in the West?

The Warriors and Cavaliers are going to play each other in the 2016-17 Finals next year and the Warriors are probably going to win.

Never has an NBA season seemed so pre-ordained for two teams to meet up in the championship round.

The Cavs have real holes, but no team in the East is capable enough of exploiting what LeBron James can patch-up.

The Warriors have no holes, or at least none that should matter.

Everything we know suggests these teams will meet again in the Finals for the third consecutive year, and once again the match-up will be almost unrecognisable from the title bout that preceded it.

2015 had no Kevin Love and (effectively) no Kyrie Irving. 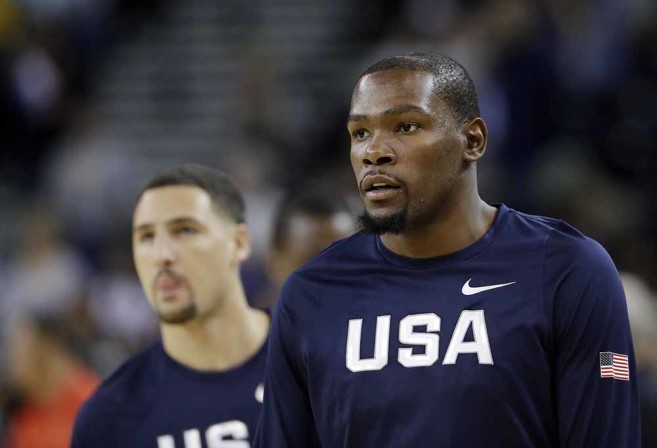 The teams will meet again, and like the films in a Christopher Nolan Batman trilogy, the flavour will be slightly different, but just as compelling.

The Cavaliers have gone 24-4 in the East playoffs the past two seasons. Pause and think about that for a second. There is nothing to suggest that anything in the East can topple the champions, aside from an injury to LeBron James.

The Warriors should be better than the Cavs this coming season, although their path to the Finals is trickier. But the West, while still better than the East at the top, will be less wild than it has been in years.

The Spurs will be thereabouts, as they always are, but their prospects are murkier than in years past. Pau Gasol is not an upgrade on Tim Duncan, and the drop in big-man depth from David West, Boris Diaw, and Boban Marjanovic, to David Lee and Dewayne Dedmon is substantial.

A core of Kawhi Leonard and LaMarcus Aldridge is imposing, but Aldridge’s fit on this team has never been seamless, and the Warriors have no fear of San Antonio’s offence. With Duncan’s departure this feels like a transition season for the Spurs, and Golden State have always murdered teams in transition.

The genius of signing Durant wasn’t just that the Warriors added one of the three best basketball players on the planet – they also decimated their biggest rival in the process. Oklahoma City will still be good next season, but they won’t be meaningful.

With the best teams in the West making significant changes all over the place, the Clippers will believe that their roster continuity gives them an advantage. Good for them. The problem with that thinking is that the Warriors have already owned them for two years and just added Kevin freaking Durant.

The Clippers have become the Arsenal of the NBA. While Arsenal fans might convince themselves that the stability of Arsene Wenger holds them in good stead in a league where Chelsea and both Manchester teams changed coaches in the offseason, the reality is that the ‘instability’ of adding a decent striker and some better defenders is much more preferable.

The Clippers are the same, just instead of upgrading on Olivier Giroud, they need a better small forward than Wesley Johnson.

Houston, Memphis, and Dallas all made roster tweaks that will make them meaninglessly more interesting. Portland went all-in locking up the core of a 44-win team that has the ceiling of a 54-win team.

So where will a contender emerge, not necessarily to topple Golden State, but just to make them wipe some sweat from their forehead? I point you to Salt Lake City.

If this Warriors squad has any weakness, it’s a perceived lack of size. That’s true vertically, but they make up for it horizontally with a defensive identity built on crazy length that Durant will slide right into. Still, they can be beaten on the boards.

The Cavs did it in the 2015 Finals, and the Clippers theoretically can do it too with their Blake Griffin-DeAndre Jordan frontline. Right up until the moment when they start choking in the fourth quarter.

No team is going to beat the Warriors at small-ball. You can’t outrun or outgun a line-up of Stephen Curry, Klay Thompson, Andre Igoudala, Kevin Durant and Draymond Green. They will beat you by 60 metres in a 100-metre sprint, and they will pull the trigger before you’ve even purchased your firearm.

The blueprint for beating the Warriors is going to have to be with size. On that front, the Jazz get bragging rights.

Derrick Favors and Rudy Gobert form the most intimidating defensive frontline in the game. Even with that duo missing a combined 41 games last season, and playing hurt in many more, the Jazz finished with the seventh ranked defence in the league.

A better run of health for Favors and Gobert, combined with the addition of stellar point guard defender George Hill, means that it would be shocking if the Jazz didn’t finish next season with a top five defence, if not a top three one.

Oklahoma City showed that the way to disrupt the fluidity of Golden State’s offence is with size and length, and Utah has that in spades. Favors, Gobert, Hill, Gordon Hayward, Rodney Hood, Alec Burks, Joe Johnson and the returning Dante Exum all have length and excellent size for their position.

The Jazz played the Warriors tough last season, losing their two home games against them by three points and in overtime. They will be better this year, and no team will give Golden State more defensive headaches.

The question for the Jazz, as it has been for the past two seasons, will be on offence. Manufacturing points at a consistently efficient rate without a transcendent offensive talent is hell in the NBA. Butler University fan-boys might tell you otherwise, but Gordon Hayward lacks transcendence.

Even without that star, though, and with all their injuries, the Jazz conjured up the 14th most efficient offence in the league last season. That’s not great, but it’s a stepping-stone, and with better health and their roster additions, the Jazz could be a top ten offence this season.

George Hill will be the Jazz’s best point guard since Deron Williams was good. Hill can run an offence, defend both guard spots, and play off-ball while Hood and Hayward handle.

Joe Johnson was a savvy, low-risk addition, someone whose nous and confidence, misplaced at this stage in his career or otherwise, will help a team that often looked lost at the end of games.

Boris Diaw is past it, but will be a capable insurance policy for Trey Lyles, one of the league’s most fascinating youngsters. This year will give us a better look at whether Lyles has more Draymond Green in him or more Kyle Anderson.

Exum will be back, and the presence of Hill and veterans Shelvin Mack and Raul Neto means that he won’t be hurried into things before he’s ready. He’s still the future, though, and it wasn’t long ago that people were wondering if he was a potential first pick in the draft.

The Jazz are loaded with depth, with totally respectable players like Diaw, Mack and Joe Ingles who might not even make it into the rotation. Their cap situation is awkward going forward, with about 26 players needing to be re-signed or extended, but for 2016-17 they’re locked and loaded. There’s no reason they can’t be a top four seed in the West.

Quin Snyder is an excellent coach, and with their defensive size, length and cohesion, ability to crash the offensive glass (fourth in the league last year for offensive rebounding rate), and slow pace, they might be Golden State’s most uncomfortable match-up.

Do they have a prayer of beating the Warriors in a seven-game series? No, probably not. But they can make the Warriors sweat, and against a team that good, causing a little perspiration would be a landmark accomplishment.