Humans can't bolt much faster than Usain: What science says about the 100m world record

We’ve just watched the incomparable Usain Bolt ensure his immortality as the greatest sprinter of all time with his third successive 100m Olympic Gold medal in Rio.  The world rejoiced and the embattled Rio Olympics organisers and IAAF breathed a sigh of relief as the Great Jamaican ran down twice convicted doping cheat Justin Gatlin to claim his rightful place in the Olympic pantheon.

The triumph came barely half an hour after South African Wayde van Niekerk smashed Michael Johnson’s 17-year-old 400m world record to beat home a star-studded field in the final of that event to scorch the lap in 43.03s, a whopping 0.15s faster than the old mark.

What an hour for the fastest humans on the planet.   The 100m final is my favourite nine and a bit seconds of any Olympic Games. So primal. So raw. No other modes of transport involved. No distance to endure, water to splash through or bends in the track to negotiate. No racquets, bats, clubs or balls. Just the fastest of a land-based mammal species attempting to out-run one another from start to finish over a very short distance in a straight line.

The pre-race theatrics and psych-out game-faces of these strutting alpha males worth the price of admission alone.

And how mouth-watering is Bolt vs Van Niekerk in the 200m later in the week?   I get to thinking, when it rolls around every four years, at what point do the sprint records stop getting broken?

When do humans reach the limit of the speed they are physiologically capable of running any faster than? 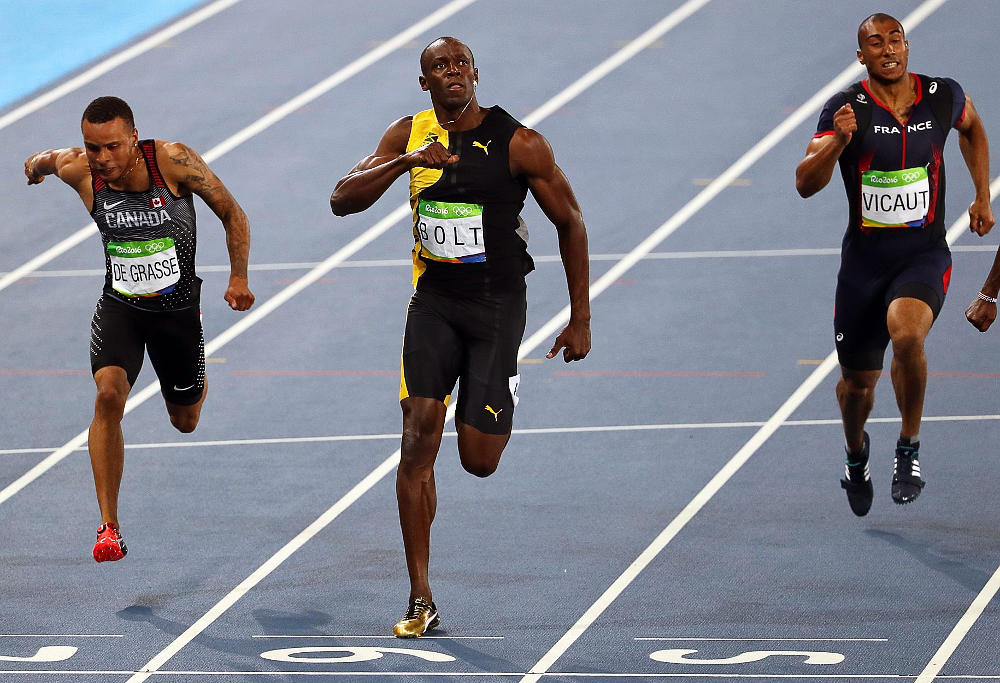 His time today was 9.81s, after a typically dreadful start.

The men’s 100m world record back in 1891 when these things were first reliably recorded was 10.8s. So it took 118 years and quantum leaps in sports science, preparation, conditioning, apparel (not to mention sponsorship and media dollars) etc to shave 1.22s off the mark.

It’s unlikely that we’ll see the current record lowered by 1.22 seconds ever – let alone within the next 118 years.   Stanford biologist Mark Denny used a statistical analysis to cap the 100m world record for men at 9.48s, a mere one tenth of a second lower than Bolt’s current time.

In a 2008 study published in the Journal of Experimental Biology, Denny modelled the fastest human running speed using records of men’s 100m race results going back to the 1900s.

Denny plotted the annual best times in the race into a graph and used computer programs to come up with an equation whose curve best models the behaviour of the actual graph he obtained.   To cut a long and complex maths story short, his curve showed humanly achievable time for 100m would level off at 9.48 seconds.

“They haven’t plateaued yet, but you can definitely see the data are bending a little towards that plateau,” Denny said of today’s fastest sprinters.

However, as former British Prime Minister Benjamin Disraeli observed: “There are three kinds of lies: lies, damned lies, and statistics”.

Others have looked at the mechanics of how humans run to understand the limits of how fast we can go as a species.

Peter Weyand, a biomechanics professor at Southern Methodist University in Dallas is a leading expert in human locomotion. He reckons the primary factor influencing speed is how much force sprinters hit the ground with their feet.

When athletes run at a constant speed they use their limbs like pogo sticks, Weyand says. Once a sprinter hits the ground, his limb compresses and gets him ready to rebound. When he’s in the air, the feet get ready to hit the ground again.

Every time a runner hits the ground, 90 per cent of the force goes vertically to push him or her up again, while only 5 per cent propels him or her horizontally. In that regard, sprinters behave a lot like one of those super bouncy balls you play with as a kid, Weyand says. “They bounce a lot.”   Our body naturally adjusts to how fast we run by changing how hard we hit the ground. The harder we hit the ground, the faster we go.

So just how hard can humans hit the ground while they run?

In a 2010 study published in the Journal of Applied Physiology, Weyand and four other scientists had athletes running on treadmills at a constant speed in different gaits – running forward, backward, and hopping. Their study found that when we hop, our limbs hit the ground with 30 per cent more force than when we run, primarily because the foot stays much longer in the air.

But the medals are handed out for running not hopping. Maximising running speed requires a trade-off between hitting the ground hard and maintaining stride frequency.  Hitting the ground with maximum force requires the sprinter to spend more time in the air, which slows down the strides he/she can make per second. The optimal combination of stride frequency and ground force varies with individuals depending on their size, leg length, and the speed they run, Weyand says. There is no golden ratio.

Although reluctant to give a definite number on the fastest human running speed possible because “science is not good at making predictions of extremes,” Weyand suggests 9 seconds flat is “definitely possible”, but not much faster. Regardless of whether they’re clean or doped up to the eyeballs.

So at an Olympics or other such major athletics meet at some stage in the next few hundred or few thousand years a human will ran as fast as any human will ever be able to and that record will never be broken. Insane but it has to be true.

In the meantime let’s just marvel at the fastest humans running around today.