It has been a luckless few days for Australia on the medal front, but the green and gold finally have their seventh with Tom Burton sailing to gold in the men’s laser event.

After the ten preliminary races, Burton was sitting in second place on the overall points standings, behind Tonci Stipanovic of Croatia.

With the aim of having the lowest possible score, Burton got off to a horrific start in the preliminaries finishing 17th and eighth in the first two races, while Stipanovic won the first race and finished fifth in the second.

Some strong performances from Burton over the remainder of the races though including second place in Races 3 and 8 and a fourth placed finish in Race 10 while Stipanovic struggled to stay consistent saw him into second place.

Still, heading into the medal race, he was still ten points behind and needed to finish five positions ahead of Stipanovic if he wanted to move into first place and take home an illustrious gold medal.

Home crowd favourite Robert Scheidt would take out the final race with Burton coming in third position. Despite the best efforts of the Croatian, he would come over the finish line a distant ninth position and end on 75 points, two behind Burton on 73.

The final was almost over before it started for Stipanovic who could only be beaten by Burton and simply needed to keep the Aussie in his sights. Instead, Burton slipped under his guard forcing Stipanovic to react and chase eventually colliding boats.

Stipanovic would have to complete a penalty turn back around the start line, and by the time that had happened the fleet, with Burton overtaking boats left, right and centre was away.

New Zealand’s Sam Meech would claim the bronze medal in the event.

Burton said after the race his coach has given him a 25 per cent chance of pulling it off and claiming gold, while he gave himself something more like a ten per cent chance, saying he might do it one in ten times.

‘But one is all you need.’ said an elated Burton.

A successful day for Australia on the water then, but plenty to do if we want to climb back up to the top of the medal table, currently sitting in ninth place.

Hold the presses, Queensland is in line for a $36.2 billion jobs, export and tourism bonanza if it secures the 2032 South East Queensland (SEQ) Olympics and Paralympics. So states the state government’s own economic analysis. The state government’s own report also highlights the creation of no less than 130,000 direct jobs, including 10,000 in […]

At age 13, Marina Carrier moved with her family to the United Kingdom after her dad had been given a job opportunity. 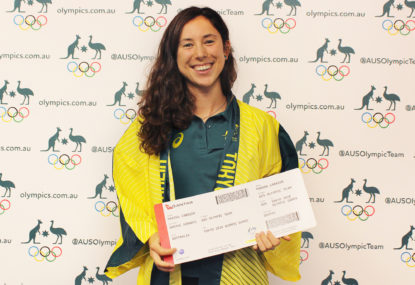 The last time softball was contested at an Olympics Games was 12 years ago in 2008 in Beijing. Only two members of the current Aussie Spirit squad participated in those Olympic Games: captain Stacey Porter and Justine Smethurst.