Raiders must learn from Roosters' mistakes

On Wednesday afternoon, news filtered through from Canberra that their star half Blake Austin had a broken hand and would likely miss the remainder of the NRL season.

However, he had surgery on Thursday in a desperate bid to play again in 2016.

The situation is strongly reminiscent of the one that the Sydney Roosters went through just 12 months ago.

In the Roosters’ Round 24 win over the Brisbane Broncos, co-captain and halfback Mitchell Pearce tore his hamstring.

Early media reports stated that Pearce would be out for the remainder of the season. However, Pearce was nearly selected in the Roosters qualifying final loss to Melbourne, then was named but pulled out of the semi-final win over Canterbury before returning for the grand final qualifier in Brisbane.

With the benefit of hindsight, coach Trent Robinson would have left him out and started with Jackson Hastings, but it wasn’t to be. A still-injured Pearce made his return, struggling with his hamstring before eventually coming off with a long time to go in the match.

As history shows, the Roosters were thrashed by the rampant Broncos 31-12 and many fans still question what might have been if they had let Pearce rest for another game.

It is vital for the Raiders to learn from the Roosters mistakes if they are to break a 22-year premiership drought in 2016.

They have a perfectly able replacement in Sam Williams. Williams was preferred to Austin in the first couple of matches this season. Don’t pick an unfit Austin just because he could play.

Pick him if he can play without re-aggravating his injury. But if they make the same mistakes as the Roosters did in 2015, they will be left to wonder what might have been. 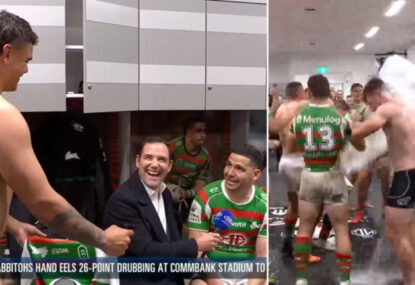