He then made the argument that the first question leads to “self-pity” and a “disavowal of personal responsibility.” This approach leads to failure.

The second question leads to “self-help” and “moral agency.” This approach, Lewis insists, leads to success.

Now let us look at the Bernard Lewis thesis in the light of the Wallabies loss 29-9 in Wellington and the subsequent media conference at which their coach Michael Cheika blamed World Rugby, un-punished illegal play by the All Blacks and bias by the referees before and during the Test for the loss.

This was Cheika’s reply when asked to comment about the performance of the referee, Frenchman Romain Poite: “Well, I was bitterly disappointed, to be honest. I’m on record with the referees’ boss Alain Rolland about the treatment of our captain and our players, by Romain Poite and also by Nigel Owens over this last year.

“I’m not quite sure why, but there was a time in the game in a break when the national captain of Australia (Stephen Moore) was asking the referee, ‘when might there be an opportunity for me to talk to you?’ And he absolutely ignored him. He’s got the whistle, I understand, but there’s a place where the captain has an opportunity to speak to the referee.

“The referee may not like the captain personally, that might be his perogative, but he has to afford him that opportunity if he is affording it to his opponents. I think that attitude followed right through. David Pocock was being called off by the assistant referee for a head injury assessment and the referee wouldn’t stop the game. The players almost went straight through the doctor, even though he was requested by the players to stop so the players could go off.”

I have given this statement from Cheika in a long form to make it obvious that this was not an off-the-cuff statement. The Wallabies coach had clearly thought out what he wanted to say at the media conference. And he pulled no punches in making this statement.

It is obvious from the attack on the match referee Poite and on Owens, who was in no way involved in the Test, that Cheika was posing the question: “Who did this to us?” And his answer is very obvious: the referees.

This is an approach that has led to failure on the part of the Wallabies.(Click to Tweet)

Nigel Owens was the referee in the 2015 Rugby World Cup final between the Wallabies and the All Blacks. He told Stephen Moore early on in the final, around the 12th-minute mark, that he didn’t want any more hectoring and lecturing on what he had to do in certain situations.

Owens could hardly be said to have been antagonistic to the Wallabies during the final, however. Yes, he did tell Moore to back off from the ranting. But he gave a yellow card against the All Blacks when Ben Smith lifted a Wallaby and placed him down with force on the ground.

Owens was actually talked into the yellow card by the TMO. His initial decision was to award a penalty. But the TMO insisted on over-ruling Owens on the gravity of the offence.

Owens also favoured the Wallabies, in a sense doubling-up with favouring the Wallabies in this area, by refusing to give a yellow card to Sekope Kepu who continued his (deliberate) head-high and late tackles on Dan Carter, even though he had been warned by Owens “next time, you’re off.”

As it happens, the referee for the Brisbane Test against the Springboks is… Nigel Owens.

It was not smart by Cheika to attack the impartiality of a referee (Owens) who is going to referee the next Test the Wallabies play.

It would be smart, though, by Cheika if he exercised his right (after alerting the All Blacks to what he intended to do) to have a chat with Owens this week. He could go through his grievances and get a response from Owens.

The point about the referees (and they include the Australian referee Angus Gardner) objections to Stephen Moore’s behaviour towards them is that it is long-standing.

Moore has maintained a hectoring, lecturing and smart-arse manner towards referees in three different tournaments – the Rugby World Cup, Super Rugby and now the Rugby Championship.

In important matches in all three of these tournaments Moore has had to be told, virtually at the beginning of the game, not to call for penalties against the opposition for play that does not warrant such a sanction.

At Auckland, Moore told referee Poite early on in the Test that the All Blacks had been jersey-pulling in the Sydney Test and therefore they should be penalised immediately at Auckland when he claimed (without any evidence) that the same thing was happening again.

This is bizarre behaviour. No referee is going to put up with it. Poite did not. Owens did not at Twickenham. Gardner did not at Canberra in the quarter-final of the 2016 Super Rugby tournament.

And Owens will not put up with Moore hectoring him at Brisbane.

An incident during the Auckland Test gives an interesting insight into the mind of referees and their invariably hostile reaction to being told how to do their job.

There was a scrum around the halfway mark. The Wallabies had the put-in. The scrum went down and Aaron Smith, the All Blacks half back started chirping about how the Wallabies props were “boring in.”

Referee Poite re-set the scrum and went around to the other side to sort out the problem. More chirping from Smith took place as the scrum went down again.

Poite listened to the chirping and awarded a penalty to the – Wallabies!

That was the end of chirping from Smith for the rest of the Test.

We come back now to Michael Cheika and what he needs to do to turn around the Wallabies.

The brilliant essay on Cheika by Harry Jones that The Roar published last week gave a telling insight into a coach with a sharp mind and a somewhat volatile temperament.

Too often this year, Cheika has exhibited his volatile temperament. He needs now to demonstrate that the sharp mind that made him the only coach to win a major European rugby tournament and a Super Rugby tournament is on job for the Wallabies. 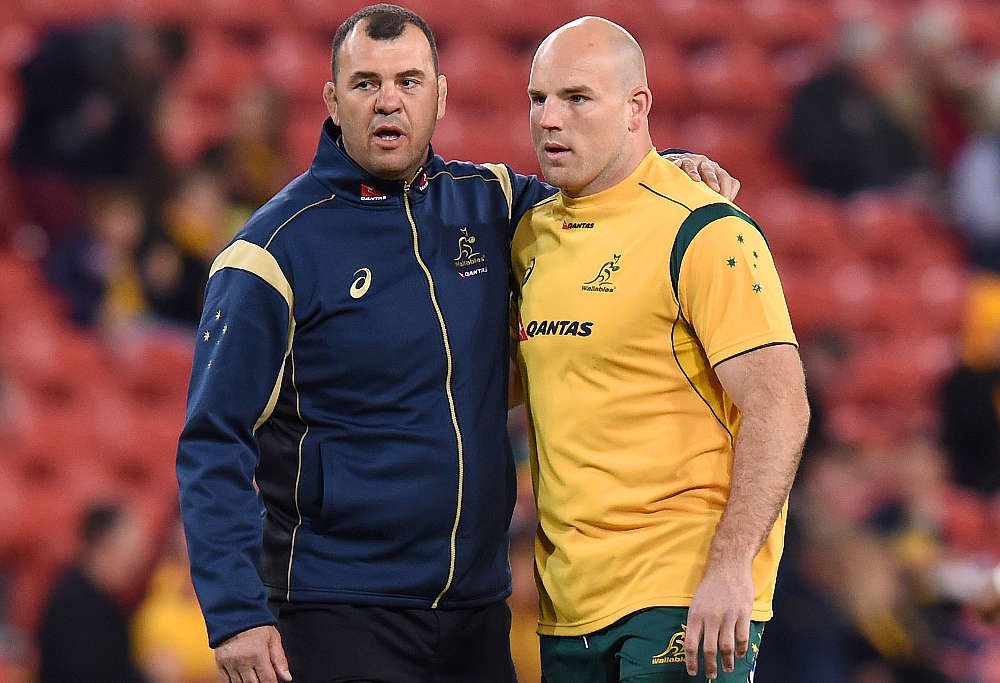 Cheika showed when guiding the Waratahs in 2014 to their first Super Rugby trophy that he can use the energy from his volatile temperament, along with the sharpness of mind that made him, like Rod Macqueen, a highly successful businessman, to create a terrific, title-winning side.

The first step towards this, after the debacle on and off the field at Auckland last weekend, is to totally disregard everything a gaggle of former Wallabies on television have to say about the Test, the performance of the Wallabies and the referees.

During the Auckland Test, for instance, both Sharpe (Channel Ten) and Kearns (Fox Sports) praised the ‘thugby’ style of the Wallabies. When Adam Coleman, who had been warned to calm down by the referee in the sixth minute, shoulder-charged Ben Smith just before half-time and was given a yellow card, both former Wallabies said that they “liked” this sign of aggression.

This is stupid commentary. The thugby game has never been the way successful Wallabies sides have played in the past. There is a difference between thuggish play and vigorous, hard-shouldered play that these former Wallabies should be aware of.

Kafer and Burke have gone into great detail about an alleged “bias” by the referees against the Wallabies.

Again this is stupid, self-pitying and self-defeating commentary. There is no nuance or understanding in their articles.

These former Wallabies/commentators are only interested in asking Bernard Lewis’ first question: “Who did this to us?”

This response is a recipe for future failure, as we have seen already this year with the Wallabies losing their first five Tests.

These former Wallabies would serve the team and Cheika much more if they asked the question: “What did we do wrong?”

Mark Ella did this with a splendid analysis in The Australian on Saturday on why Quade Cooper and Bernard Foley should not be selected to play a two-playmakers game against the Springboks on Saturday at Brisbane. It remains a mystery to me why Mark Ella is not used in television commentary.

This bring me to the crux of the matter for the Wallabies after this year’s disastrous defeats in the first five Tests for 2016.

There is enough talent within Australian rugby for Michael Cheika to select a side that can defeat the Springboks. But the selection process has to be much more accurate than it has been throughout this year.

I would argue that the pack should have at least two strong lineout jumpers, preferably three.

It should have a combative, big, aggressive ball-carrying number 8.

It should have an inside centre who has experience of playing in this position.

It should have wingers who are specialist wingers, who have the pace to finish off movements and who can create something out of nothing from time to time. In other words, wingers who are try scoring threats.

It should not have players being selected out of position.

The defensive system should be de-complicated so that players understand that in general they defend in the positions they play on the field.

These suggestions fall into the “self-help” category that Bernard Lewis says is the basis for future success.

There is no joy for a rugby writer like myself to be a continual scold of the Wallabies coach. It would be great for everyone involved with Australian rugby if we could write next Monday that a well-selected and well-coached Wallabies side defeated the Springboks at Brisbane.

This outcome will come if Michael Cheika confronts himself, his other coaches and his players with the “what did we do wrong” question.

It won’t come, probably, if the question “who did this to us” is asked.

How Cheika faces this moment of truth could determine his future as a successful Wallabies coach.