Here is the story of two unconventional bowling tactics used in cricket, one overarm and one underarm. Let me start with the overarm one.

Harold Larwood adopted some very controversial overarm bowling tactics in the Ashes series Down Under in 1932-33, by aiming deliberately at the body of the batsmen – we know it today as Bodyline.

Though unconventional, Bodyline was perfectly legal within the boundaries and regulations in cricket and helped England to win the Ashes that summer.

Nearly half a centuarly later, in another Aussie summer, came the another unconventional tactic in the form the famous underarm incident. It happened in early 1981 in the Benson and Hedges series final between Australia and New Zealand.

New Zealand needed a six off the last ball to tie the match. It was that moment when captain Greg Chappell walked over to his younger brother Trevor before the latter was going to last bowl the last ball.

The elder Chappell told his younger sibling to bowl an underarm delivery, rolling it along the ground to the Kiwi batsman Brian McKechnie. Trevor duly obliged his elder brother. The hapless tailender threw the bat away in disgust.

The next day, all the newspapers screamed at this unsporting gesture which even led to a diplomatic row between the two nations. I still remember a newspaper headline – “Chappell’s underarm stinks”. Incidentally, India was the other team in that triangular series who didn’t qualify for the finals, eliminated with just two wins out of ten matches.

A Kiwi underarm company promised to supply deodorants to the Chappell brothers to relieve them of their odor, which had tainted the game more than their sweat soiling their shirts.

Yet, per the laws of cricket, they didn’t break any rules. In fact, the umpires were told before the delivery of Chappell’s intentions and it was perfectly legal under the law.

So Australia won the match, New Zealand the heart. Thus ends the saga of two unconventional tactics used in cricket: Bodyline and underarm, both regarded as controversial and unsportsmanlike, yet within the parameters of the rules at the time.

Ben Stokes isn’t just ready to make a return, he’s set to have a huge impact on the Ashes, according to England coach Chris Silverwood.

The umpire in this local Indian T20 tournament has gone viral. 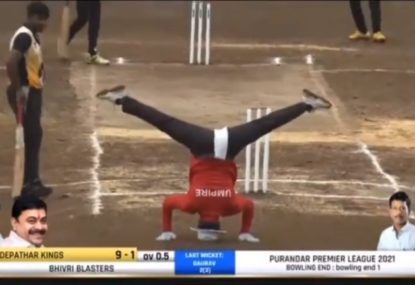 With the Ashes starting on Wednesday, The Roar is counting down the top 40 Ashes moments from the past 40 years.

The Sydney Sixers have posted the biggest win in BBL history with a 152-run thrashing of the hapless Melbourne Stars at the SCG to start the 2021-22 season.