North Melbourne players of the year and season review

After that, they didn’t claim another top eight scalp, only winning three more games.

The make-up of the fixture coaxed us into wrongly thinking that North were contenders. They finished eighth, clinging onto a finals spot through percentage. The Kangaroos had a host of players who performed early, but as the club went through a massive form slump, few carried on.

North Melbourne was the only top eight side without a player in the All-Australian team, although Robbie Tarrant could have easily been selected. Meanwhile, Ben Cunnington and Jack Ziebell were fairly consistent throughout 2016 too.

Robbie Tarrant
The defender played his best season this year, showing his skill and ability in defence. The Kangaroos will be very happy with his impressive, consistent results this year, as last year he didn’t maintain his great work throughout the season.

Tarrant’s breakthrough season has seen him keep Jack Gunston, Lance Franklin, Taylor Walker, Jeremy Cameron and Nick Riewoldt either goalless or to just one goal each. Of these games, North Melbourne won just one, making the defender’s feat even more impressive.

Stunningly, he gave away just one free kick a game this season, a splendid number compared to some of the league’s best half backs. Tarrant led the Kangaroos for intercept possessions and marks, averaging 6.5 and six a game respectively.

Ben Cunnington
The consistent performer was as valuable as always for the Kangaroos in 2016. He led the Kangaroos in contested possessions, averaging 12, and clearances, averaging 5.7. His reliability steadied the ship many times when North Melbourne was in a panic, even if didn’t result in much.

The midfielder rarely had a bad game, even though he only averaged 21 disposals per match at 73 per cent disposal efficiency. Cunnington was one of the few Kangaroos that looked engaged and his stats suggest he performed just as well in the wins as the losses. His influence was less but his fight for the ball didn’t adapt to how pretty or ugly the scoreboard was.

Jack Ziebell
Ziebell shows great leadership on the field, with courage and eagerness to win the footy. He amassed at least 18 disposals in all but one game this year, which reflects his consistency. Ziebell accumulates a great number of pressure acts throughout games, which are crucially important, and he is first at the Kangaroos for metres gained, averaging 456 per game.

The Kangaroos have also delisted four players, Nick Dal Santo, Drew Petrie, Michael Firrito and Brent Harvey, who have proven remarkably consistent throughout their careers. Much has been made about the timing of this decision, but North Melbourne would have benefited more from delisting these players over the space of two years at least, instead of suddenly introducing four new faces to the team, and they may still lose livewire Daniel Wells as well.

The Kangaroos will need to be active during the upcoming trade period if they are to make it to September in 2017, yet, with a bulk of teams on the rise, this seems unlikely.

North Melbourne should be sitting just outside the eight next year, but even if they reach finals, it seems it will be just to make up the numbers.

North Melbourne are getting closer to avoiding a last-place finish after blowing Carlton away by 39 points at Marvel Stadium.

Ed Curnow receives the ultimate gift for his 200th game

Not bad from someone who doesn’t rate themselves as a goal kicker! Now the Blues just need an almighty comeback to give the Carlton veteran one more milestone present. 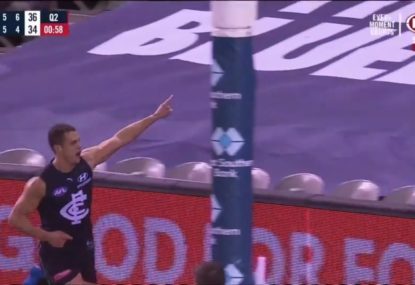 Ed Curnow receives the ultimate gift for his 200th game

Do you really have to finish a hanger off with a goal in order to enhance the chances of winning MOTY? 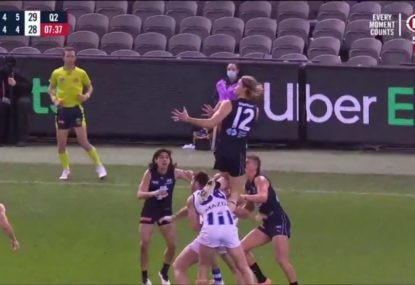 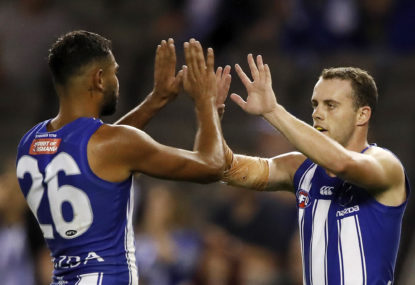