The Wolves were on course for their first league title for 61 years after going in at half-time 6-2 in front, but the Warriors turned the game around with two tries in nine minutes midway through the second stanza.

Centre Oliver Gildart brought the Cherry and Whites level by finishing off a break by man of the match Liam Farrell, before Charnley, who joins Sale at the end of the month, touched down a grubber kick from Dan Sarginson, who’ll link up with the Gold Coast Titans next season, to complete the comeback win.

While Wigan celebrated what coach Shaun Wane described as his finest achievement, Warrington were left heartbroken for the second time in six weeks following their shattering 12-10 defeat to Hull in the Challenge Cup final last month.

Wane, who was desperate to avoid a hat-trick of Old Trafford defeats, will feel vindicated by his decision to bring back skipper Sean O’Loughlin for his first game for two months.

This match came only a fortnight after O’Loughlin tore a calf muscle, and he came off the bench to provide a calming influence at a crucial time.

Warrington coach Tony Smith kept faith with the team that started their semi-final against St Helens but bolstered his bench with the inclusion of Chris Sandow and he almost rescued the game for his side in a frantic second half.

Dec Patton, who might have made way for Sandow, justified his selection after 20 minutes, jinking his way through a gap in the Wigan defence following a sniping run from hooker Daryl Clark for the only try of the first half.

The youngster added the conversion to make it 6-2, which is how it stayed for the rest of the first half, though not for the lack of incident.

Matty Smith, on his last Wigan appearance before his anticipated return to St Helens, had given his side the lead with an eighth-minute penalty and Warriors fluffed a gilt-edged chance following a clean break by the impressive Farrell when centre Anthony Gelling sent out a forward pass to Charnley.

The pivotal moment came 13 minutes into the second half when Warrington centre Ryan Atkins forced his way to the line only to lose his grip on the ball in a five-man tackle, and within a minute Wigan were level.

Farrell slipped the tackle of Kurt Gidley to break free put Gildart over to level the scores.

Wigan then punished a handling error by winger Tom Lineham on the hour when Charnley easily won the race to Sarginson’s grubber kick to the corner.

Smith was again wide with the conversion attempt but made amends with a penalty seven minutes from the end a to ice the victory. 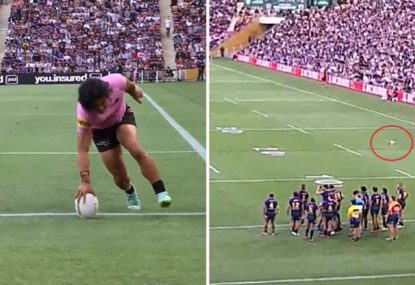