Green-Mundine is a waste of bloody time

There’s a really good-sized list of reasons I won’t be watching Danny Green and Anthony Mundine’s fight they haven’t dubbed “Ambulance Chasing in Adelaide” but should.

Chief among them is that it’s a monumental waste of bloody time.

It is. Watching the fight would be a big waste of time, much less spending actual money, yet again, on this borderline grotesque pantomime, this parody of sport, this soul-less lunge to greed and stupidity and publicity-deprivation syndrome, well … it’s a waste of bloody time.

It’s like, what are you doing? You’re middle-aged men, not spunk-filled pack rats. Don’t do this. You’re slow and old, and the only saving grace is the other bloke’s the same.

And as for that theatrical pre-fight “hype”, all that nose-to-nose “banter”, please. It’s a tired old game of cliched drivel. It’s laughable. It’s a veritable nonsense.

Ten years ago, Green-Mundine was a highly-hyped and quite big thing. And yet even that fight, as a contest, as a show, sort of sputtered out to nothing memorable.

And it’s because, well, neither fighter is particularly very good.

Mundine had a little bit of lightning and show-boatery, and could self-promote for Australia. And he showed heart and talent when he lost on points to Mikkel Kessler, a Viking.

And for a while people thought, ‘Wow – maybe he isn’t such a wanker.’

But he wasn’t… he wasn’t actually ever very good.

Green’s the same. Green’s worse. I went running with him once when he was fresh from Perth and training with Jeff Fenech. And he could certainly run more laps of a park in Five Dock than me.

But that was in 2001 before his training partner Glen Kelly went to the United States to be embarrassed by Roy Jones Jnr. And Green was 27 then. And not really that good.

Green became popular because he used media to promote himself as best of the batch who could shut the lippy bloke’s gob.

Green didn’t ever say it like that, of course, he didn’t have to. Because “Choc” Mundine was always shooting off his mouth with some latest bit of inflammatory gibber. And Green just had to promote himself as the man to silence The Man.

And then they had the “Fight of the Century” at the Sydney Football Stadium, and everyone got paid.

And if you think race wasn’t a reason a certain large percentage of people bought a Pay-TV subscription or a ticket to the SFS then Rocky Balboa never told Clubber Lang things ain’t so bad.

Mundine is like a carny spruiker. He’s not stupid. He knows his ‘Ali’ schtick fires up a section of Australia that can’t cop him.

The Man’s schtick will sell tickets to a punch-up with a bloke called Green. It doesn’t bring Australians closer.

Ali did it in context, in 1964, in America. I mean, we’ve got our problems in this big old lug of a country and we’ve got some scars and open wounds about white man’s subjugation of black.

But sitting down during national anthems, gobbing off shite, I don’t think it helps. Surely you can be proud of your culture and your “country” without disrespecting your fellow countrymen.

Can’t you? Can’t you not be divisive?

Another thing: I know blokes who know Mundine and say he’s as good a bloke as you could meet. That all this swagger and stuff, all the “Man” gibber-jabber, it’s all an act. That he’s a friendly, generous and good bloke. 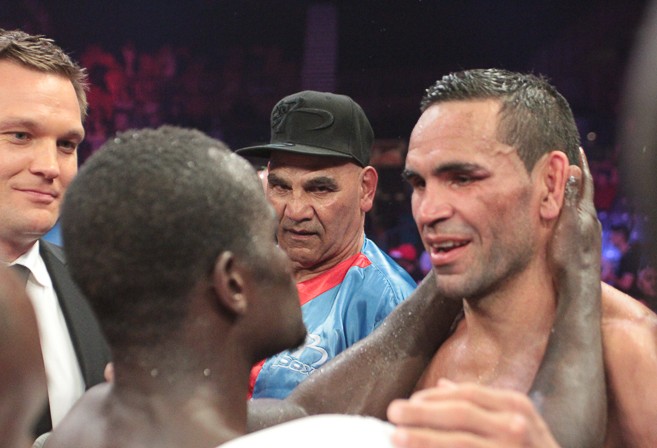 I’d prefer that Mundine to the Ali Clone, the parody that fires up white bigots just as readily as Pauline Hanson.

Everyone would prefer that guy. And Mundine could use his profile for good.

Instead, he’s flogging tickets to a dangerous pantomime.

Dangerous? Did you read Peter FitzSimons’ column Thursday in the Herald? Say what you will about the great bandanna-ed gibber-man – and plenty do, oh yes – but he knows things about concussion, about head injury.

And effectively it comes down to this: if you get whacked about the head, your brain will bleed and you’ll sustain a brain injury.

And not just an unlucky few, everyone. And it will bleed and “hurt in a manner from which there is no coming back.”

And you’d suggest that one day there’ll be no (legal) boxing as there is no (legal) dog-fighting. Mind you dog-racing was made illegal and now it’s not, and … here we are…

… still talking about reasons why Green-Mundine 2 in Adelaide is a bad idea.

Want another one? Why fund a last pay-day for two blokes and their handlers, their enablers, their people? What other reason is this on than money?

There’d be an element of publicity deprivation syndrome. An element of mid-life crisis, even, for two stars of a sport who’d reprise their glory days. A need to stay in focus. It’s a thing, it happens.

I dunno… I’ve been jack of the pair of them ten years. I just no longer care. And yet here they are, again, fighting for money, promoting themselves through the free advertising of media.

And pay-TV subscribers will ante up, again, and see an under-card of bouncers and street kids and footballers.

And Mundine will bop in to a tune of something and Green to, I dunno, Green Day, say. And then we’ll all get ready to rumble.

And then two middle-aged men will do their best, and fox and feint and throw crisp punches at one another for the first round or two, even three.

And then they’ll get tired and hold each other up, and waltz around, and do it for as long as possible.

And Mundine will show-boat (badly) and Green will burrow in and work the ribs (ineffectually) and unless one man gets lucky and makes the other (less lucky) man bleed so badly on the brain he passes out from concussion, they will do it for twelve three-minute rounds.

So watch it if you will. But I’m here to say it’s a gigantic bloody waste of time.

Adelaide can have ’em.