The ceiling case: Why the Cowboys should still go back to Tony Romo

As America heads to the polls next week to elect the next leader of the free world, a more mature debate rages in Dallas.

At the beginning of the season, the question wasn’t whether rookie quarterback Dak Prescott would thrive, it was whether he would survive. Quarterbacks drafted number one are typically a disaster in their rookie season – what hope is there for those taken at the end of the fourth round?

Prescott’s unlikely success is the biggest story of the NFL season. This is not a flash in the pan – we have seven weeks of evidence suggesting he’s special. He stands tall in the pocket with a poise beyond his years and pedigree, and he makes decisions like someone for whom the number ‘135′ would seem to denote to games played, not draft position.

Physically, he’s the perfect prototype for the modern quarterback. He’s tall, mobile and forceful – guys bounce off of him. His presence at the line of scrimmage is commanding, and he plays with statesman-like charisma. Like all the great quarterbacks, it often feels like the game is a part of him and not the other way around.

Sunday night, Prescott’s worst game of the season, was perhaps the greatest affirmation of his ascending star. Overwhelmed by the Eagles ferocious defence and rattled by a pass rush that hit him six times and sacked him twice, Prescott finally looked like a rookie. He made his worst mistake, tossing a crushing end-zone interception at the end of the second quarter that never had a chance.

But, as the best quarterbacks always do, he proved to have a short memory, and played the end of the game as though the start had never happened. He found a higher gear and calmly drove the Cowboys to the tying and winning touchdowns. As a result, the Cowboys head to Cleveland at 6-1 with a two-game lead in the division and the best record in the NFC.

All the while Tony Romo, who finished third in the league MVP award the last time he played a full season, sits back and watches, his vertebra healing, his heart, you would suspect, aching.

Texas is already grudgingly but firmly moving away from Romo. He’s been a great servant, but he’s an old, wounded 36. Prescott is the future, and if you listen to most Cowboys fans, Prescott is the present.

But the baton shouldn’t be passed just yet.

Today, we don’t picture Tony Romo as the player who, less than two years ago, was one of the five best quarterbacks in the NFL and an egregious refereeing decision away from a trip to the NFC title game. We picture him being crushed by Cliff Avril, Thomas Davis and Jordan Hicks, and not getting up. 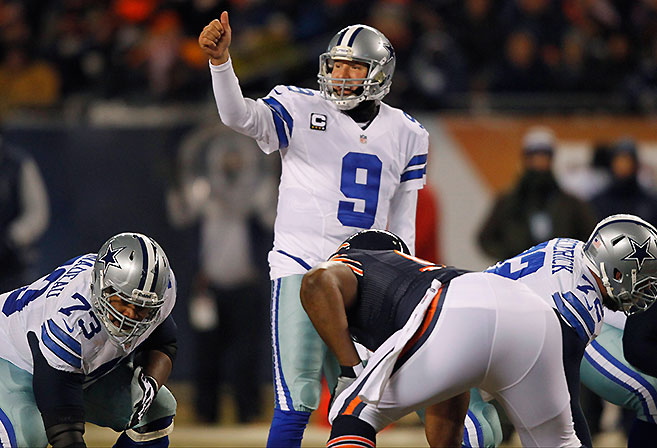 The notion that an incumbent starter should never lose their job due to injury is old school to the point of stale, a type of Byron Scott-don’t-shoot-threes antiquated. Romo shouldn’t get his job back because he didn’t deserve to lose it – he should get it back because he’s a better quarterback than Prescott.

The last time we saw Romo healthy he finished a season where he put up the best QBR and quarterback rating in the league. He had a 34-9 touchdown-interception ratio and the best yards per attempt in the league. Of the non-dragon quarterbacks, Romo might have been the game’s best.

Prescott is good but he’s not Romo. His numbers and performances have been inflated by a schedule of easy defences – by DVOA, the teams he’s faced have ranked ninth, 22nd, 19th, 24th, 23rd, seventh and first in defence. He excelled against Green Bay’s seventh-ranked unit, but struggled mightily against the Giants ninth-ranked D and Philadelphia’s league-leading defence. That’s not a blight on Prescott – it’s just the reality of a rookie quarterback. And as magical as he’s been, he hasn’t been able to dispel reality entirely.

Prescott isn’t going anywhere – the Cowboys have him on a bargain basement contract for three seasons after this one. The problem for Prescott supporters is that Romo isn’t going anywhere either. The onerous structure of his contract means that he likely won’t be cut or traded until 2018 at the earliest.

The best case scenario at Jerry World is this: Romo plays out this season and next at a high level before handing the reigns over to Dak. The present improves and the future stays on the roster.

From what we’ve seen, Romo’s best is better than Prescott’s best, and, health permitting, he’s a more reliable bet to reach his best more often. If health doesn’t permit, then the Cowboys’ decision is made for them.

But right now, Dallas’s ceiling is lifted with Romo. His synergy with Dez Bryant alone could elevate the Cowboys from ‘possibly’ the best team in the weak NFC to definitively the best. The Cowboys have the number one offensive line in the league, the best running game and a defence that is closer to competent than anyone could have expected.

With Prescott, they can continue being a feel good story. With Romo, they can win the Super Bowl.