Wales have a chance to beat the Wallabies

It hasn’t happened for eight long years, since 29 November 2008. That was the last time Wales beat the Wallabies, at the Millennium stadium in Cardiff. Yet the average margin between the two teams over the 11 matches played during that period of drought is only a meagre four points.

Australia lost their three matches to New Zealand in 2016 by an average margin of 27 points, Wales lost the three-match summer series to the same opponents by 24. This week, all the indicators point towards another game where the nails of both sets of supporters will be bitten down to the cuticle by the time the ref’s whistle blows to bring the game to an end.

They say that the styles make the fights, and the contrast in styles always produces an eminently watchable spectacle between Wales and Australia. Some of the highlights from one of my favourite autumn tour matches (back in 2013) were already included in a previous article on The Roar.

Australia will want to keep ball and establish their big men on the advantage line, their Adam Colemans and Rory Arnolds and Lopeti Timanis. Wales will do everything in their power to deny them with the most aggressive press defence in the Northern Hemisphere.

There will be some mighty collisions at the line, and the breakdowns will turn swiftly into bar-room brawls with the likes of Sam Warburton, Dan Lydiate, David Pocock and Michael Hooper involved. And yes, there will be blood. 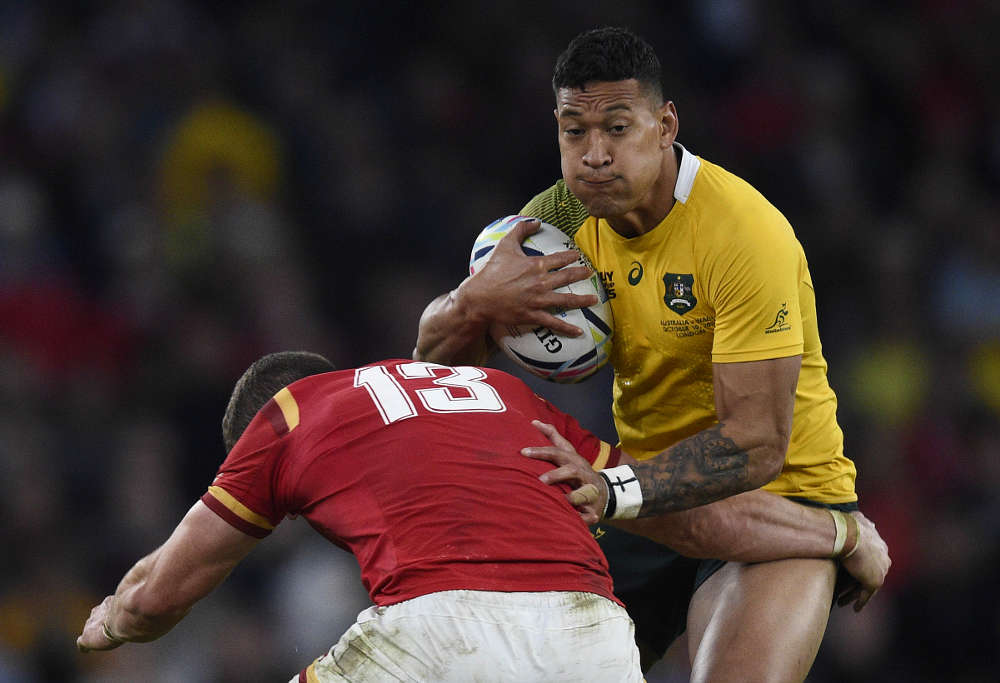 In attack, Wales will be looking to build on the promising foundations of their summer tour to New Zealand (which looks all the better with the benefit of Rugby Championship hindsight) and continue to expand the range of their game on the counter, from kick returns and turnovers. Ball retention in contact and exit strategy, are areas where Australia have proven vulnerable in 2016, so they will probably be the most important aspects of the contest this coming weekend.

Wales team selection issues
Like Australia, Wales’ team selection has been hamstrung by questions of availability, with the game on Saturday falling outside the IRB window for automatic release of players. Six potential starters play their rugby in the English Premiership – centre Jamie Roberts at Harlequins, wing George North at Northampton, forwards Luke Charteris and Taulupe Faletau at Bath, back-rower Ross Moriarty at Gloucester and prop Tom Francis at Exeter.

At the time of writing, it still remains uncertain how many of these players will be released by their clubs. Roberts and North for example, have a release clause built into their club contracts, but when George North was released for the equivalent 2013 fixture against Australia, his club Northampton were promptly fined £60,000 by the clubs’ governing body, Premiership Rugby!

It may be that there will be some horse-trading, with Wales’ less important fixture against Japan on 19 November traded for availability for the crucial game against Australia. Wales’ influential no.8 Faletau is definitely out with injury, while captain Sam Warburton is recovering from a long concussion absence suffered in a club match on 1 October. He will have a metal plate in his cheek and cannot be match-sharp even if selected.

How the teams match up – Goal-kicking
With recent matches having been so closely-contested, goal-kicking accuracy will be a key issue, and in this respect Wales have a clear advantage:

Both Welsh goal-kickers, number 10 Dan Biggar and number 15 Leigh Halfpenny, enjoy a 10-17% advantage overall and can take on the more difficult shots at goal. Potentially this could mean a 3-6 point head-start on penalty goals or conversions.

Under their ex-rugby league defence coach Shaun Edwards, Wales will deliver heavy numbers to the line and attack at source. The opposition first and second receivers will be under constant pressure to make instant decisions with time and space at a premium, as my article on Beauden Barrett back in August illustrated.

In that game back in 2014, Barrett was harried to distraction for the first hour, forced into a succession of handling and kicking mistakes and taking the ball from his scrum-half in a ‘pocket’ well shy of the advantage line.

Wales will try to bring similar suffocating pressure to bear on the Wallaby halves, whoever is selected at numbers 9 and 10. Here are some examples of the Wales defence in action in June:

The first sequence in the reel, towards the end of the second Test in Wellington shows a typical result, an echo of the 2014 autumn game between the two countries. The Wales centres Jamie Roberts and Jonathan Davies run straight upfield on to the All Blacks second receiver Seta Tamanivalu so that he has to make a decision ten metres behind the advantage line. His kick is smothered by Roberts with Davies making an impressive finish to the interception return at the end of the sequence.

The second and third examples (from the first Test at Eden Park) show how this pattern of defence can leave some space on the edge, if the second receiver is good enough to operate under the pressure that number 13 Davies in particular will apply.

In the first instance Malakai Fekitoa makes a superb long pass off his left hand to create space for Naholo down the right side-line, in the second example it is quick hands through Fekitoa and Ben Smith which achieve the same result.

The third sequence (from a lineout drive in the second Test) is even simpler. With number 12 Ryan Crotty holding the Wales inside defence and Davies ‘spotting’ Aaron Cruden as the second man, the long skip pass from Aaron Smith to Fekitoa leaves New Zealand in position ‘A’ and Wales in position ‘Z’. The two-on-one overlap is easily converted by Israel Dagg.

The All Blacks also used greater back-line depth to draw Jonathan Davies even further upfield and extend the line-spacings inside him. At 50:57 Roberts is struggling to close the gap underneath Davies and Beauden Barrett duly takes advantage of the hole as a measure of revenge for 2014!

The cross-kick or its cousin the kick-pass has also been a favoured New Zealand method for beating the Wales defence when it leaves only one player in the backfield (as the Barrett article again demonstrates). The All Blacks made one score and had a host or near-misses with this tactic in the summer. With the last defender following Davies in and upfield, it gives the full-back an awful lot of work to do cover the space to the wide open-side.

How will Wales play? Welsh attack against the All Blacks
Wales made some strides in the 2016 Six Nations in the effort to expand their attacking game, and they scored five tries in the first two games against New Zealand, compared to the Wallabies’ yield of two in three matches.

Wales had a lot of success with their counters off turnover and kick return in New Zealand. In the reel, the first try (Eden Park at 8:34) derived from a reclaimed high kick, the second came from a kick return (Eden Park 30:45), the third break from a turnover (Eden Park at 23:48). Wales were far more alert to these ‘unstructured’ opportunities than they have been in the past, and they were all the better for it.

Liam Williams has made a huge difference the line-breaking capacity of the Wales team over the past couple of seasons. He will break the first tackle on counters and has deceptive ‘gliding’ speed and acceleration thereafter. He picks excellent straight lines on the short ball when the defence is relatively well-structured (Eden Park at 23:48 and Wellington at 72:57). North has been a powerful ball-carrier for a long time, and a thorn in Australia’s side for both Wales and the British and Irish Lions in times past.

Wales’ willingness to maintain the width of their attack and integrate forwards into the pattern is also a relatively new development. At Eden Park at 8:26 and 16:20 forwards like Alun-Wyn Jones and Ross Moriarty are required to have the handling skills to pass the ball behind into the second line, or stay out wide in the 5m channels to provide scoring width (Faletau at Eden Park 8:34, Jones at Wellington 39:08). This has given Wales additional ability to stretch defences by going wide-wide in the space of two or three phases.

Wales still maintain their power through the middle in the form of centres Roberts (1.93m and 110kgs) and Davies (1.86m and 105kgs). There will be a significant physical challenge presented to Reece Hodge defending at 12, and either Tevita Kuridrani or Israel Folau defending in the 13 channel from set-piece, with Davies especially dangerous in a straight line with his compact physique and low centre of gravity.

Summary
There will probably not be much to choose between the two sides in the set-piece, so the game will probably boil down to the key areas examined above: Wales’ ability to pressure the Australian first and second receivers and create turnovers, the Wallabies’ capacity to exploit the Welsh defensive press – and goal-kicking.

The selection of the Australian midfield, the combination at 10 and 12 and Will Genia’s availability for the game will therefore be crucial. Whoever plays at 10 will have to be on top of their game kicking both out of hand and at goal. I suspect Tevita Kuridrani will a straightforward replacement for Samu Kerevi at 13, regardless of who starts inside him.

Back-row selection will be made all the more interesting by David Pocock’s return. Timani/Pocock/Hooper and Mumm/Timani/Hooper (with Pocock coming off the bench) are probably the two likeliest choices in that department.

It promises to be another close-run thing, with (at this stage) Wales very fractional one or two point favourites.