Test cricket has story and contest. T20 is Pokemon pointless

Kids? Why aren’t you into Test cricket? I mean, what do you want?

Test cricket has “story”. It’s compelling. It has context. Across the actual six hours of a day’s play there are so many little tendrils of story.

And human beings love story. We’ve loved it since we sat in the cave and told scary tales of bears.

T20 cricket is like a hunt for a Pokemon, whatever the hell that was. When it’s over no-one remembers what they were even doing there in the first place.

It’s not that bad. In fact T20 cricket is quite cool. And fun. And exciting.

And when it’s on every night in January you can sit there and turn it on and knock the top off a tinny and get into it.

But it’s still shit cricket. It’s throwaway. It has no story. It’s just all the whiz-bang bits.

It’s Star Wars without Darth Vader being Luke’s dad. It’s just special effects and X-wing fighters and lightsabre fights by wookies for no reason, just to have ‘em.

The batting is windy whacks and reverse slog sixes, and all the edges of the bat represented.

It’s a three-hour paean to big whack action with bowlers treated like the “pitchers” in baseball’s home run derby – fodder for the cannon. Feed ‘em in, smash ‘em out. Bring another one in to be disemboweled.

It’s less a battle between bat and ball as a carny game of Whack-A-Mole with broken moles that don’t disappear.

And anyway – David Warner? How about him? 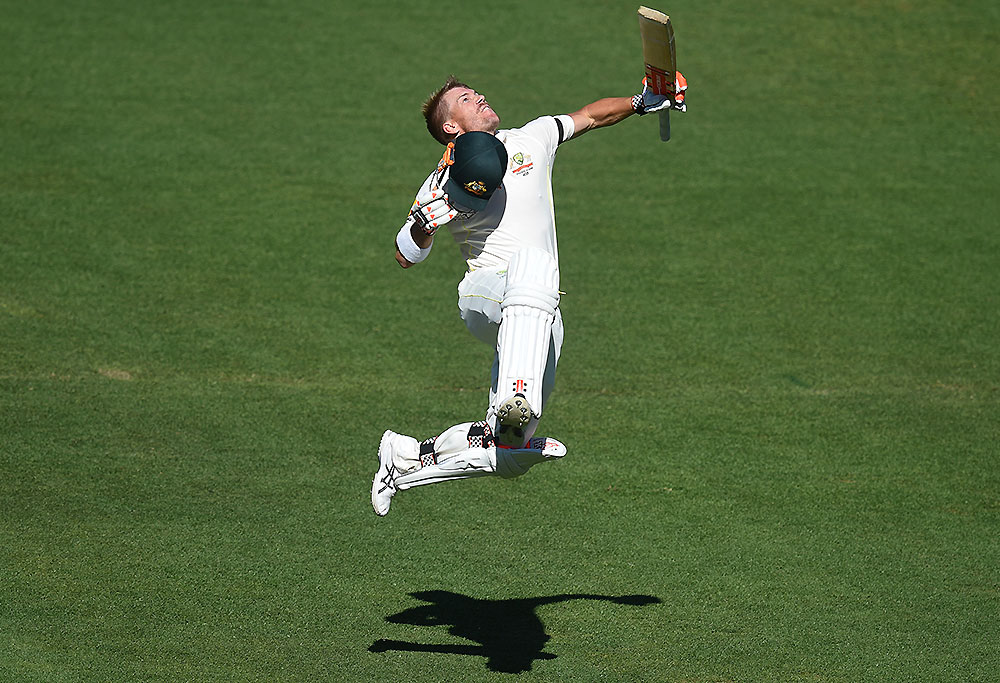 Blistering batsman in form, our Bull. He’s a show, a one-man show. He belts ‘em.

So you’ve got super-fast bowler, one of the best there’s ever been, versus Our Davey, hard man of Matraville. Now that, friends, is a contest. That’s a story. That’s freakin’ great.

First ball of the last over of the day, most everyone else would be shutting up shop. But the Bull, he smacks a cover drive for four.

Look, kids? It’s just the premier form of the game, and the game doesn’t need to trick Test cricket up (though I do love the pink action), as much as educate you people about its primacy.

Yes, T20 is more “fun”. The whacking is big and the lights are on and the female interviewers are nervous.

And it’s a big and bubbly smack-a-thon of big whack-action, and you can meet other kids there and you’ll whack together some blow-up pink things and … yes. There is that.

And during Test cricket it’s fair enough if you you want to head out the back and have a hit among the other urchins, coming back in to ask the old man for a bucket of chips.

But come on! Mitchell Starc bowling flat out, Hazlewood, Steyn, Philander, bowling serious, accurate heat, “testing” the batsmen on a WACA pitch like a trampoline. What’s not to like?

That’s cricket. That is contest.

In T20 these champions of our game can bowl their best good length out-swingers that do a little off the wicket, a discipline that’s taken much sweat and toil to master, and go for four or six runs over third man.

Because of a shit cricket shot.

Bowlers in T20 are flat out disrespected. And so is the very game.

The world’s T20 leagues make off with the best players like a hungry kid hoovering up the marrow from the bone of mum’s lamb roast.

I was watching the IPL a few years ago, and Mumbai Indians (bit of an odd handle, for mine, even for a team containing mostly Indians) scored 190 runs in 84 balls against Rajasthan Royals.

And it was like … what? Did the Royals forget how to bowl? How can bowlers not throw down Yorkers?

Only one bowler, someone called Kevon Cooper (2-38) conceded less than 12.5 runs an over.

I mean, that’s hideous! That’s ridiculous! Just bowl at their toes! It isn’t that hard.

All bowlers do is train how to bowl. Test cricket they can land six in a row on a 20-cent bit.

In this T20 malarkey they send down six different ones, all of which disappear into Row Z.

I don’t get it. Batters aren’t this good. They’re not. Something’s crook in Tallarook.

And thus young cricketers are looking at this sort of malarkey, and seeing all the coin being thrown at ‘Wild Thing’ and ‘Big Show’ and ‘Michael Clarke’ and thinking, well, how many dollars is a score crore of rupees?

Shaun Tait was once up there with Shoaib Akhtar as the fastest leather-flinging mad chook there’s ever been. Old mate Wild Thing could sling heat so hot by the time the ball reached the batsman it was a molten ball of lava.

Today he is paid crazy money to bowl four overs a match for Kolkata Knight Riders, a stupid name for a cricket team.

Meanwhile, the opening batsmen of the Test team of Australia does battle with the best fast bowlers in the world.

What more do you want?