That was the most damning loss of them all

Australia’s 177-run loss at the WACA is, out of all of their recent abominations, the worst of the lot.

The game, perfectly set up on the second afternoon at 0-158, came alive as the Aussies proceeded to lose all ten wickets for 86. From there the Test match was dominated by a touring South African side with a mashed-together attack of three part-timers, a spinner on debut, probably their best ever seamer breaking down mid-match, and a batting line-up missing the world’s best batsman.

For the first two days, the game couldn’t have gone any more to script for the Australians if they had tried. An expert bowling performance on Day 1 had the South Africans reeling at 5-81 before a mini fight-back by Faf Du Plessis, Temba Bavuma and the ultra-impressive Quinton De Kock.

But then David Warner played like David Warner does, wielding a slashing willow in brutal fashion to take the game away from the opposition, getting the scoring rate above three and a half an over. That is the blueprint for the way Australia plays their cricket – aggressive yet calculated with bat and ball, taking the initiative from the opposition quickly, and then burying them never to seize their grip.

It seemed the first Test back on home soil after the 0-3 drubbing in Sri Lanka had brought about normal service resuming halfway through Day 2 of the Test match summer. You simply expected the Australians to take the game beyond doubt in fierce fashion, just like the last home Ashes summer, or the first and third Tests in South Africa the same season.

But then 21-year old firebrand Kagiso Rabada started to swing the ball at pace. Warner went. Philander was unrelenting, and Keshav Maharaj bowled with control and guile beyond that of a man making his Test debut. Soon, Dean Elgar and JP Duminy were set, and the South Africans went all Australian on the Australians. 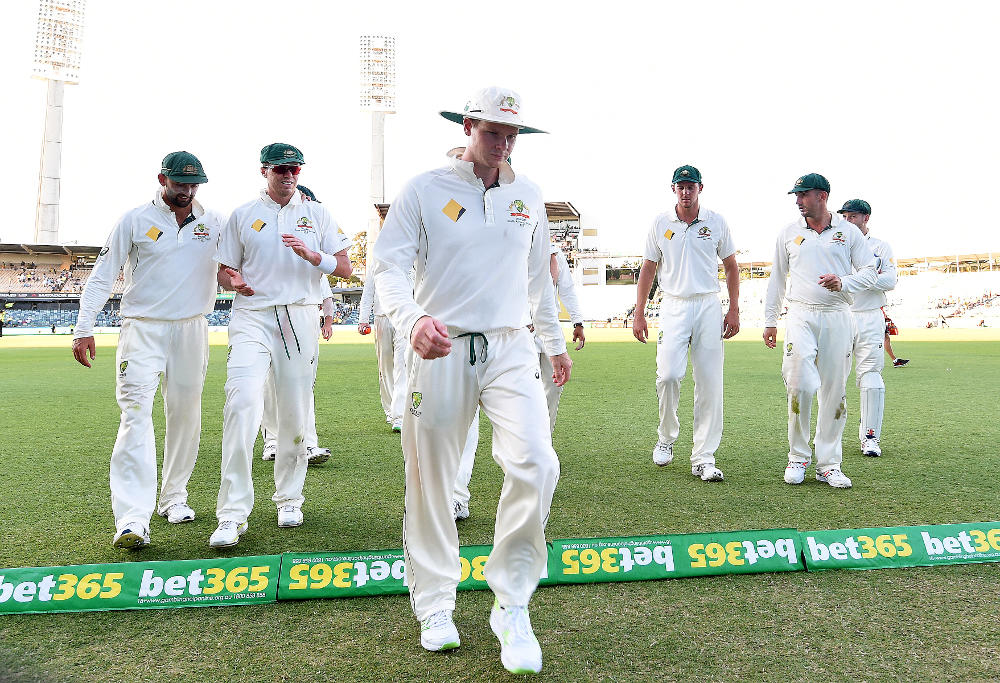 The left-handed pair battered the tired home side into the ground, and once the declaration came, 539 was always going to be too much despite the valiant efforts of Usman Khawaja and Peter Nevill.

The first innings debacle felt like an all too familiar tale for Australia, yet almost felt scarily different. You half expect a collapse going to India when it’s turning sideways, England where it seams and swings heavily, or in the UAE or Sri Lanka where often a trio of spinners tangle the Australians into submission. But here at the WACA on a good wicket, in a familiar setting, against a weakened attack?

Hardly batting performances that scream a nation on the climb, in fact it reeks of the exact opposite. Granted, 15 of the 20 above statistics are from overseas Test matches, but it is still an indictment.

So often, it is selection that people criticize when things go wrong in the Test arena, or players are brought into question. Mitch Marsh, and to a lesser extent Nathan Lyon are victims of this (ridiculous on the behalf of Lyon, a proven performer). But both men have had the difficult task of essentially learning their craft on the go under the Test match spotlight – Lyon debuting in 2011 after only playing state cricket for the first time in 2009, and Marsh made his Test debut after only 38 first class matches. Gone are the days of players battering the door down after years of strong Shield performances.

None of this is an excuse for poor output, but maybe, just maybe, instead of questioning those in the team, maybe it is time to say we’re not actually that good? A heavy loss at home may bring that suggestion closer to people’s minds than they care to imagine.