Hidden behind their strikers, Sydney's midfield is firing

Six wins from six games, the most goals scored and the fewest conceded, through to the semi-finals of the FFA Cup and yet to be breached in that competition. It’s no wonder Sydney FC are the current favourites for the A-League.

There are several potential candidates in naming the key player behind this spectacular start. Milos Ninkovic has been the star playmaker, Alex Brosque has scored the goals and Rhyan Grant has been rampant down the right.

However, the two who really make Sydney tick, that give the side balance, are the central pivot pairing of Josh Brillante and Brandon O’Neill. They, above all others, are Sydney’s most important players.

At first glance, Ninkovic is the obvious candidate for that lofty claim. The Serbian playmaker wrapped up the PFA’s first Player of the Month award for this new season (only Bruno Fornaroli might have disagreed with their decision) and has tallied an impressive four goals and three assists so far, already coming close to matching the overall tally from his debut season.

He knits Sydney together in attack. Originally starting the season in the No.10 position, he has been shifted to the left to accommodate Brosque’s return from injury. Yet he more or less has been operating in the same zones, as he drifts inside into positions between the lines to find space behind opposition midfielders.

What is particularly clever about Ninkovic is the way he is constantly on the move. Watch him closely – the way he checks over his shoulder, glances from side to side – it is a masterclass in spatial awareness, and it is why it always feels like he has so much space.

On the opposite side is marquee Filip Holosko, who, like Ninkovic, has made massive strides in his second year at the club. If Ninkovic is the brains, then Holosko is the brawn; a powerful, direct runner who drives forward from out wide into goalscoring positions. 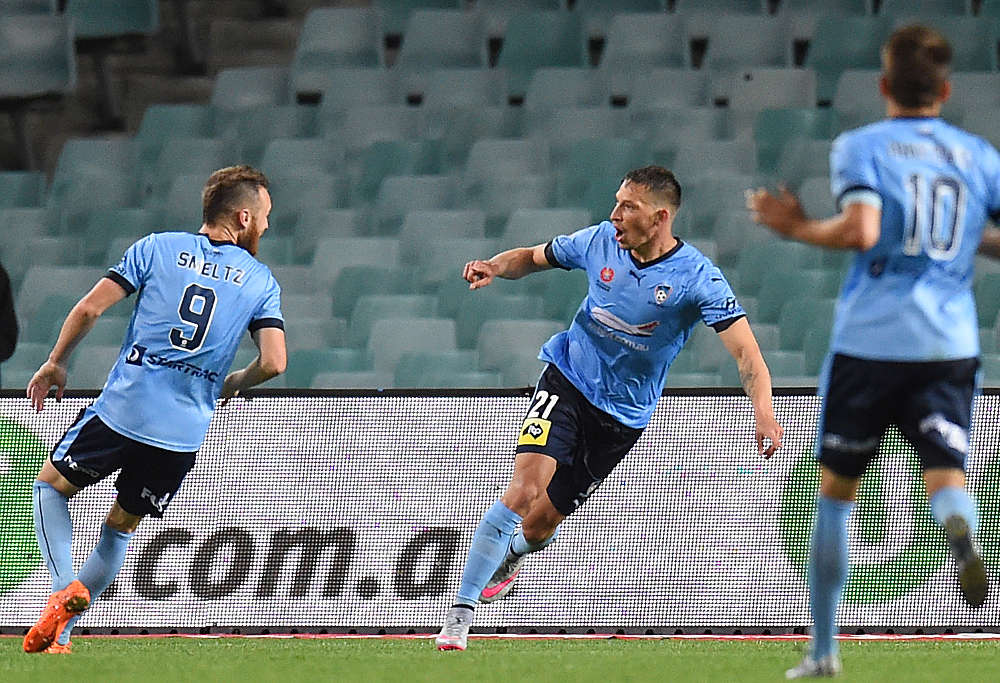 Holosko is not just all muscle, though. He has reignited an old partnership with new striker Bobo, a relationship that dates back to their Besiktas days.

“We have a good understanding, we know each other and I know where he is going to place himself,” Bobo said, speaking to the Sydney Morning Herald. “It first happened naturally but also by working hard every day and over time by playing together.”

The narrowness of the wide players has opened up space for another two star performers, the full-backs. Michael Zullo and Grant charge forward energetically to provide width which would otherwise be absent.

Grant, for so long a versatile workhorse, has blossomed into a genuinely excellent right-back this season, with his Energiser Bunny performance against Melbourne Victory striking up talk of a Socceroos call-up.

The full-backs are a critical part of Graham Arnold’s staple 4-2-3-1 system, dating back when Josh Rose and Pedj Bojic were part of the Central Coast Mariners’ Championship-winning side. 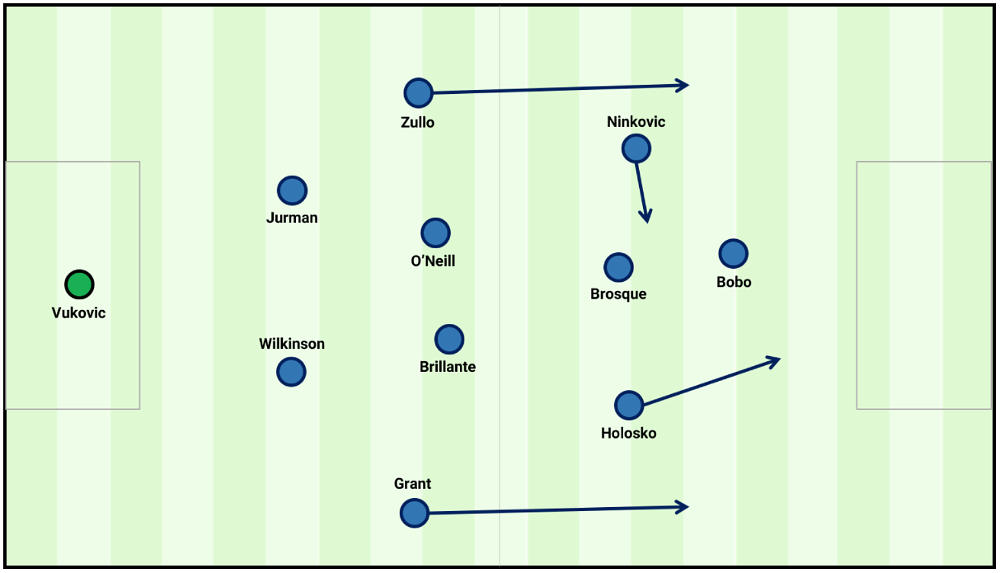 In fact, this current Sydney team feels very similar to that great Mariners side – a mix of talented young Australians with foreign experience (think Nick Montgomery and Patrick Zwaanswijk) in a settled, balanced team.

Like the Sydney of today, the two midfielders of the team fly somewhat under the radar. It is worth remembering how solid and consistent Montgomery and his partner in crime John Hutchinson were in that 2011-12 season. Both sitting in a deep midfield role, they had great positional discipline to provide balance and cover for when the full-backs flew forward, keeping the side from being vulnerable to counter-attacks. Brillante and O’Neill are the modern day incarnates.

The two also contribute with the ball. Normally, halftime player interviews are tedious, but O’Neill was illuminating at the break against Perth Glory in describing the role he had just played.

“I thought we were very patient with the ball, moving it from side to side and looking for the gaps to open up… where we can play [the attackers],” he said.

Both Brillante and O’Neill are excellent at distributing across the full width of the pitch, as well as playing penetrating passes between the lines.

They also move and rotate into positions to both receive passes and open space for others. One typical rotation is to shift into a wide position on the outside of the centre-back, allowing the full-back to push higher up the pitch.

Another movement is to drop centrally between the two centre-backs, allowing the player on the ball to carry it forward. Both are illustrated in a video of the same passage of play below.

O’Neill speaks like a coach and, fittingly, he and Brillante play like coaches, always maintaining the balance of the team both with and without the ball.

Brillante and O’Neill are also Sydney’s most important players because Sydney’s biggest weakness, at least on paper, is squad depth in those midfield positions. Only Milos Dimitrijevic could fill the same role, and it is questionable whether he has the energy to both cover as much ground as the two incumbents after struggling last season to match his previous high standards.

Where they have great strength in depth is up front and at the back – the likes of David Carney, Bernie Ibini and Sebastian Ryall all currently having to settle for the bench – but their midfield could be found wanting if they were left sweating on the fitness of their current duo.

While Sydney have players who contribute more magical moments and have a bigger profile, their most important contributors can be found in midfield. Brillante and O’Neill are quite literally central to the club’s title challenge.