Stop the whinging Ireland, you're better than that

I’m surprised at the level of bleating from the Irish at the alleged rough house tactics of the All Blacks in the aftermath of the weekend’s blockbuster in Dublin.

Two incidents in particular have raised Irish ire among sections of the media and past and present players.

In the 11th minute All Black openside Sam Cane clattered into Ireland centre Robbie Henshaw with a tackle that started at the shoulders and appeared to finish with a clash of heads.

The collision ended the impressive Henshaw’s night and had the full house braying for a yellow card, or worse for Cane.

However, the TMO ajudged the All Black to have used an arm to ‘wrap’ in the tackle that was high but initially below head height. Although there was deemed to be no indiscretion, referee Jaco Peyper penalised Cane anyway. And since, the All Black has been cited and will be up before the judiciary this week.

As is his teammate, centre Malakai Fekitoa, who was rightfully binned when he made a clumsy head high tackle on Ireland left wing Simon Zebo that had the commentators seeing red nine minutes into the second half.

Former Ireland lock Neil Francis used his column in the Irish Independent to hit out at the All Blacks’ “cynicism”.

He said Cane “shoulder-charged” Henshaw, “an act which left the Irish centre in distress and twitching on the ground”.

“The tackle that I saw was a shoulder charge which ended in contact with Henshaw’s face,” Francis wrote.

“Irrespective of whether Cane attempted to complete a wrap is irrelevant – the point of contact was shoulder to face and that is a red card.”

Francis claimed Fekitoa’s tackle of Zebo was “also worthy of a red”.

He went on to say the All Blacks, “under the sort of pressure that they had to deal with here and at home, resorted to rugby of the lowest common denominator and they put in a cynical performance which pushed the boundaries too far.

“They were determined to win at all costs.”

John O’ Sullivan of the Irish Times had similar sentiments, writing that “Cane hurtled towards Robbie Henshaw looking to use his body weight as a missile to legitimately explode between the shoulder blades of the Irish centre.

“What’s the difference between running 20-metres and blindsiding a player at a ruck by thrusting a shoulder into their body, prone or otherwise, and running 20-metres flat out to hit someone, who is unsighted, full force in the back? One is illegal, the other legitimate but both outcomes are potentially dangerous.”

Hansen’s initial response to her line of enquiry about the “dangerous” incidents: “This is a moving game. The first one was a head clash, there were no arms involved; that’s all. The one on the far side was obviously a little high (over) the shoulder but I don’t think there is any malice in it.”

But when repeatedly needled about the perceived rough play he snapped back: “I’m not sure where you’re going with this. Do you want me to tell you that we’re a dirty side or something? Is that what you’re saying, or…?”.

To which the answer was a meek “no”.

The reality is that with Fekitoa’s yellow, on top of the sin binning of a lacklustre Aaron Smith for a questionable offside at a ruck earlier in the first half, the All Blacks were a quarter of the game with just 14 men. In massive matches such as this one, that’s a serious disadvantage to the depleted team, whether or not it shows up on the scoreboard. 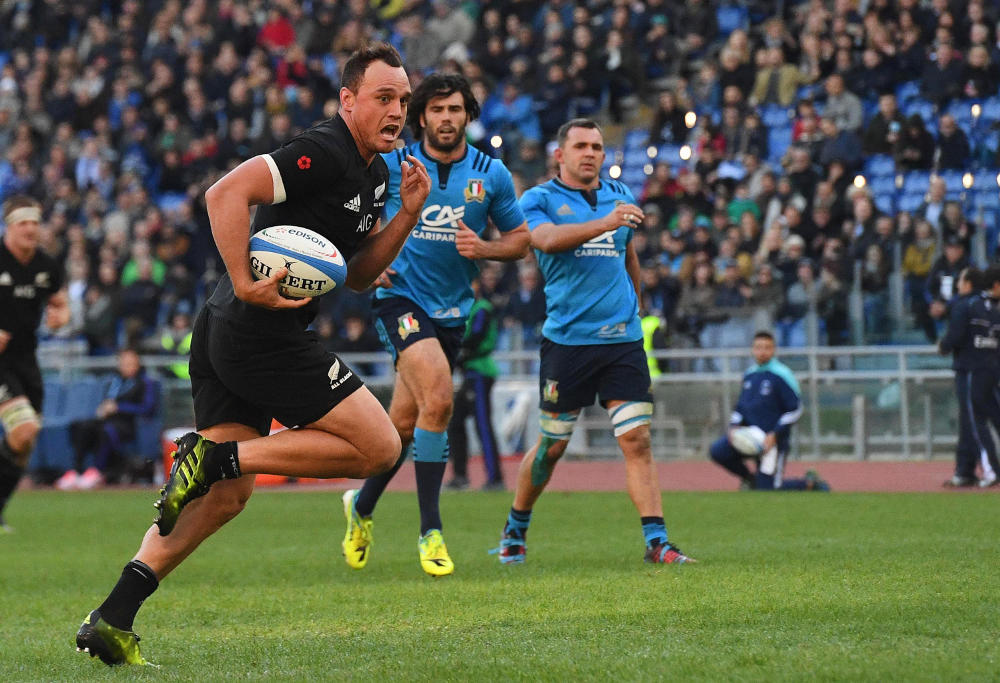 It’s a shame we’re not focussing more on what was a magnificent, brutally hard, utterly absorbing and exhilarating Test match.

The rugby world very rarely gets to witness a chastened, desperate All Black side attempting to atone for a loss. But that’s what we had in store on Sunday morning AEST thanks to Ireland’s historic heroics in Chicago a couple of weeks ago.

Ireland had not beaten the men in black in 111 years of trying previous to that epic encounter.

On Sunday, in front of a braying, expectant sold out Aviva Stadium crowd, they had the chance of lowering the World Champs’ colours twice in 14 days.

All week in the lead up All Black players spoke of how coach Steve Hansen had submitted them to a brutally frank and honest appraisal of both their preparation and performance in the loss that was deemed well below team standards.

While stressing that Ireland were by far the better team on the day, some All Blacks spoke of being “embarrassed” by their own efforts to quell the green tide that surged over the top of them that day.   Such self-seething can only produce one type of All Black response. An utterly ruthless one.

The Irish too, were equally desperate to prove to the rugby world that Chicago wasn’t an aberration and to deliver their home fans a cherished All Black scalp at home. While they didn’t achieve the latter, they certainly made good on the former in Dublin.

The bone-crunching game lived up to the spine-tingling anticipation. The All Blacks showed their lethal intent right from the kick off when they hung onto the ball for 13 phases and three minutes before man-of-the-match Beauden Barrett sent Fekitoa racing over the line from a brilliant long-range kick pass.

Three minutes later Barrett was the star again, this time somehow keeping the ball between the best forward on the park, Ireland’s rampaging openside Sean O’Brien and the goal-line to deny what looked like a certain try for the home side.

This set the tone for an utterly pulsating affair, typified by monstrous defence from both sides with the brilliance of Barrett and slightly better All Black conditioning and finishing the main points of difference in the 21-9 win to the visitors.

The excitable Irish TV commentators were spot-on when they said that the two Tests against Ireland were the toughest assignments the All Blacks had faced this year.

Toughness is a hallmark of Irish rugby. Of that I have first-hand experience having played a season there, for the University of Limerick Bohemians club 14 years ago.

Limerick is a flinty, hard-edged town that has produced flinty, hard-edged rugby players for Munster and Ireland over generations.  The city, on the banks of the Shannon River on the country’s drizzly West Coast, is the only place in the Emerald Isle where rugby sits above GAA sports hurling, gaelic football and soccer, as the number one sport.

They are simply mad for it.   I got a sense of this not long after landing when the first stop from the airport was a visit to Thomond Park to pay homage to the scene of Munster’s fabled victory over the All Blacks in 1978 – still the sole victory by any Ireland team over the All Blacks on Irish soil. 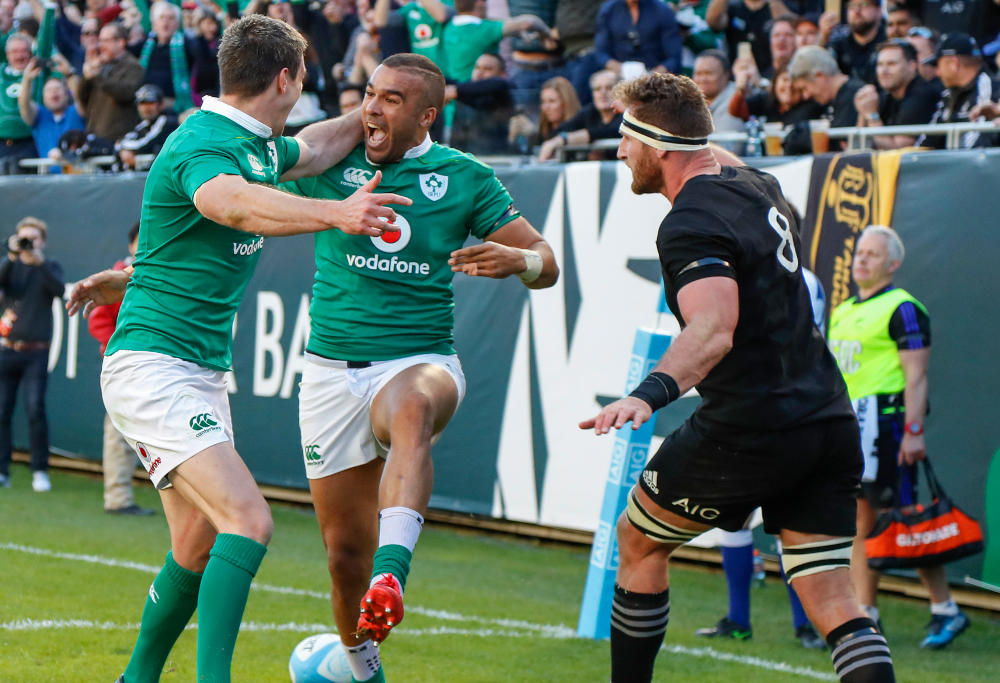 They’re tough as well as   mad.

We didn’t start team trainings until 7.30pm. By mid-season, in the depths of an Irish winter, the ground was a virtual tundra by that time of night. The inevitable day’s rain had frozen into a permafrost that your sprigs literally had to break in during the warm up.

After a few scrums and lineouts the field had been whipped into a muddy slop just in time for the opposed session between the firsts and seconds. Ancient old enmities and fresh grievances were squared off and re-ignited every week on those soggy pitches late into the night. All soon forgotten after a lukewarm shower with slightly less warm pints of the black gold in our mitts.

It was in the warm glow of those magic moments – amid the incessant mick taking and gentle humour as the Guinness prised open short quips and tall stories – when it all made sense.

Such wonderfully passionate, durable and honest rugby people. Who played hard and tough and left all of it on the field.

That’s the Irish I know and love.