Your club's next breakout player

This time last year I put together a list of young up and coming players who I thought were ready to push into an elite status.

There were some hits and misses, so this year I have decided to revise my article to – your clubs next breakout player.

For season 2017 I will look to analyse each clubs list and look for a player who I think is poised to become a known commodity within the football community. Each player selected will have less than 30 games of AFL experience.

Adelaide: Wayne Milera
Milera possesses a fantastic turn of foot and quality evasive techniques, his eight games last season left fans with a lot to be excited about, with his standout performance coming in round 2 against Port Adelaide.

At 185cm he has the opportunity to become a versatile half forward and under the tutelage of Eddie Betts and Taylor Walker he can become something very special. If he manages to find his way into one of the most dynamic forward lines in football he is definitely one to watch.

Brisbane: Josh Schache
The young talent up in Brisbane is there but is still very raw, Schache has already played 17 games and slotted 16 goals as a key forward and if last year’s No.2 pick can get some quality support around him we could be watching one of the competitions next key forwards blossom before our eyes. His best performance came against West Coast in Round 13 with 15 disposals, nine marks and two goals.

Carlton: Caleb Marchbank
I have gone for Marchbank here over Weitering because I feel that Weitering has already performed at a level that has seen him breakout, Marchbank will look to team up with Weitering and become Carlton stalwarts down back.

Marchbank’s seven games at his previous club GWS have seen him display an ability to play many different roles and his ferocious attack on the footy, an exciting prospect for sure.

Collingwood: Darcy Moore
With Travis Cloke’s dip in form last year and injuries to various players in Collingwood’s forward line, Moore became a focal point and a maturing target for his midfielders. By seasons end Moore started to gain more attention from opposing defences but that didn’t stop him in Round 19 where he booted three first half goals against the eagles.

His haul of 24 this year give us a nice little preview of a talent that is set to blossom.

Essendon: Darcy Parish
This young man oozes class, and is his first year in senior football walked into one of the most dire situations we have ever seen in the AFL. The No. 3 pick in 2015 was forced to become a player that must produce now rather than ease into AFL life, to his credit he handled it beautifully despite Essendon’s struggles throughout the year.

His 20 games see him averaging 20.8 disposals and three tackles per game, this kid is a future star and should become one sooner rather than later.

Fremantle: Cam McCarthy
It will be interesting to see how McCarthy performs after his year away from the game but I sense that in the right headspace of playing at home, he will be able to replicate if not improve what excited us so much in 2015.

35 goals in 2015 with the Giants showcased McCarthy’s athleticism which will work well with the expanses of Domain stadium. With club hero Matthew Pavlich out of the forward line McCarthy will play a massive role in helping to fill that void.

Geelong: Nakia Cockatoo
Sticking with my selection from last year I think Cockatoo has a chance to really make a name for himself in 2017, there is no questions about his line breaking speed and evasive skills. But in 2017 if Cockatoo can string some games together we will be looking for a high disposal count and a goal per game. Something that is valued highly among half-forward/midfielders in today’s AFL.

Gold Coast: Peter Wright
Much of Gold Coast’s young talent is starting to get a healthy number of games under their belt and this will only prove as a stepping stone for success in season 2017. Peter Wright managed 17 games in 2016 and has been dubbed as ‘two metre Peter”, despite his crafty nickname his 27 goals gave the Gold Coast hope of a future paring of young stars in Wright himself and Tom Lynch.

Gold Coast will be a slow improver over season 2017 and expect Wright to become more involved with opposing defences focusing largely on Tom Lynch.

On debut against Essendon, Kennedy booted three goals and impressed with his overall footy nous, not going to be the flashiest player going around but every club needs a servant to whom you can rely on to play a role week in and week out. I think Kennedy can be this guy for the Giants.

Hawthorn: Ryan Burton
Burton was able to play in four games through 2016 and was able to showcase some of his skills as an athletic forward, Burton was highly touted as a younger under 18 and would have entered the 2015 AFL draft as a top ten pick had it not been for a broken leg that kept him out during 2015.

Still Hawthorn took him at NO. 19 and have found themselves a talent that will be a major player in Burton’s future

Melbourne: Christian Petracca
Few would argue that Petracca is one of Melbourne’s finest talents even this early in his career, after his injury setback ruined 2015 he came into the line-up early in 2016 and featured prominently throughout the rest of the season.

His ability alone will allow him to become one the game’s elite players, but with a strong work ethic and desire to succeed we could be watching a future Brownlow medallist. There is so much to do in between such feats but I don’t doubt that Petracca can breakout this year.

North Melbourne: Majak Daw
Daw has wowed crowds with his immense athletic ability since the day he set foot in the AFL arena, after being drafted in 2009 Daw has only played 25 games. Late in the 2016 though Daw really hit his straps and stamped himself as a part of North Melbourne’s forward line, his mark of the year was jaw dropping but even he admits performance on the field is of more importance than a big grab. 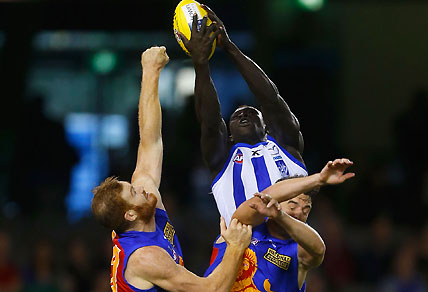 His four goals in a lopsided elimination final against the Crows has shown that he has the capability to perform in big games and hostile environments (Adelaide Oval). I believe with another full pre-season under his belt and the extra attention payed to him by the North Melbourne staff something special could be brewing.

Port Adelaide: Darcy Byrne-Jones
Byrne-Jones was one of the stories of 2016, a relatively unknown player who had been improving his game and adding to his skinny frame through the SANFL in 2014 and 2015 burst onto the scene at half back for the Power.

His attack on the footy and ability to move quickly across the ground allowed him to accumulate plenty of the ball through either contested or un-contested possessions. Look for him to continue his solid form into 2017 and push for higher honours.

Richmond: Corey Ellis
Ellis the NO. 12 pick in the 2014 AFL draft has only managed 17 career games to date, Ellis was able to string together 11 games during the early part of 2016 and his silky skills on and off his left boot did not go unnoticed.

Ellis has the ability to become a special player but will need to add aggression to his game or weight to his light frame in order to win some of his own ball. Richmond’s early draft selections have been slammed of late but Ellis still has time to prove himself.

St Kilda: Blake Acres
Acres forced his way into the side during 2016 and put in performances in a rapidly improving St Kilda outfit that hold him in good stead. Acres earned a rising star nomination following a 28 disposal, two-goal performance against Melbourne in Round 6, a good indication of what Acres could perhaps provide St Kilda in the future.

The young midfielder will want to start 2017 strong and I believe barring injury Acres should announce himself to the AFL.

Sydney: Callum Mills
The 2016 AFL rising star award winner is a superstar in waiting, his consistent performances across 22 games in a team with a calibre like Sydney does, speaks volumes of the 19-year-old.

Many of his better performances came near the end of the season which proved that even at a young age he has the capability to play consistently across a whole season. 27 disposals and eight marks in Round 21 against St Kilda shows Sydney fans what he can do at half back and moving on into the midfield.

West Coast: Thomas Barrass
Barrass played ten games in 2016 and played a fantastic brand of footy, at 194cm he is a tall defender who possesses an exceptional overhead mark along with an innate ability to read the play allowing for easy intercepting marks.

His rising star nomination came in Round 23 when he stood up and quite frankly played beyond his years against one of the most dominant forward lines in football, the Adelaide Crows. ten marks along with 17 disposals gave West Coast fans and staff a very exciting prospect for season 2017.

Western Bulldogs: Josh Dunkley
The feel-good story of 2016 was the Western Bulldogs and their young team powering towards an AFL premiership. Dunkley apart of the team on grand final day, was simply phenomenal throughout the whole of the finals series, he proved to be a contested ball weapon and showcased his clutch with pivotal skills in big games.

His 24 disposals and nine tackles in the preliminary final was outstanding and in only his 17th career game he played a massive part of a grand final win.

These players have the ability to breakout as your clubs next big name player, this list showcases a large array of sizes and different levels of skill, leadership and football instincts.

These are the next level of guys coming through, but maybe you disagree if so drop your thoughts below!