Never mind the ladder, Adelaide are primed for another late-season surge

It feels like the same old story at Adelaide United. The start of this season has mirrored the disaster of last year, with Guillermo Amor’s side anchored to the bottom of the table without a win in the opening eight games.

However, there may be reason to believe Adelaide can pull off another miraculous turnaround, just as they did last season.

The transformation into minor premiers and eventual champions was one of the great comebacks of Australian football. Yet again, there are signs this season Adelaide are slowly spluttering their way back to life. Thanks to the A-League’s unorthodox finals system, which benefits teams that build momentum in the final rounds, Amor could yet again mastermind another Adelaide form reversal.

What are these reasons for this optimism?

The reality is Adelaide simply have not been as bad as their results suggest. There are a number of reasons for this – injuries to key players, the time needed for new faces to settle and being victims of some poor officiating.

These do not entirely explain Adelaide’s issues and there has been a conspicuous lack of fluency in attack, compounded by the fact Amor has had to field an entirely new-look front three following the departures and injuries to last year’s star attackers, Craig Goodwin, Bruce Djite, Bruce Kamau and Cirio.

In their place has been a mixture of talented but clearly inexperienced youth such as Danny Choi, Jordan O’Doherty and Ryan Kitto, as well as new imports Henrique and Nikola Mileusnic. Sergio Guardiola has been the spearhead up front.

Similar in style to his predecessor, Djite, Guardiola drops off from advanced positions to receive long, vertical passes with his back to goal, encouraging midfielders to move forward and receive layoffs. Guardiola is also clever around the box, and likes to make sudden changes of direction away from goal to escape the close attention of defenders, looking to get on the end of cut-backs. He is yet to find consistent form, but fits the Amor template.

That template places a great onus on the wingers to occupy opposition full-backs in high and wide positions. Playing with maximum width is an Adelaide tactical feature that dates back to the Josep Gombau era.

Encouraged to take defenders on one-on-one, the wingers also make darting runs into goalscoring positions. This is an area where Cirio’s absence has been most keenly felt, especially as Henrique, the player most stylistically similar, has been injured. The Brazilian’s scheduled return this weekend is a boon for Amor.

The benefit of the wingers stretching the pitch is it creates space in the channels for midfielders and full-backs to dart into. This is most evident whenever Tarek Elrich drives forward from right-back, with his superb goal against Melbourne Victory in Round 3 a good example of how he is able to underlap on the inside of the pitch, cutting inside onto his left foot to shoot. 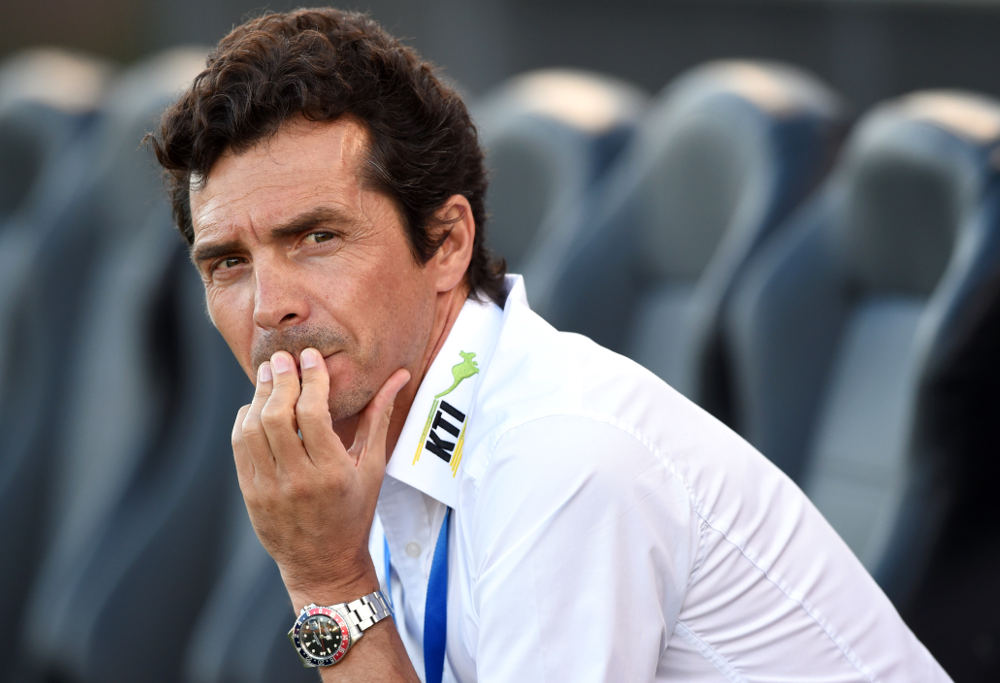 Additionally, Marcelo Carrusca drifts across the pitch to exploit this space created by the wingers. In recent weeks, Amor has sought to give Carrusca more freedom by switching the positions of the two deeper midfielders, Isaias and James Holland.

The former, the ever-present number six of the last three seasons, has been moved slightly further forward, with Holland taking up the deepest position in midfield as a holding player.

This has two key effects. Firstly it gets Holland – a creative long-range passer – on the ball more frequently, and secondly, as Isaias tends to drift back towards his deeper role when Adelaide have possession, it draws opposition midfielders further up the pitch, thus creating more space for Carrusca to play like an out-and-out number ten between the lines.

All this adds up to an encouraging bigger picture. It took Adelaide time to build up familiarity in attack last season, too, but once the side clicked, Amor was able to stick more or less to the same formula in the second half of the season. The signs bode well for Adelaide, then, that they will find greater fluency in attack as the season progresses.

Defensively, too, Adelaide are becoming increasing solid. Amor is a better defensive coach than given credit for – perhaps as fans tend to focus on his Barcelona background – and he drilled his side excellently last season without the ball.

The key is how they defend collectively. They press as a unit, squeezing opponents high up the pitch, but can also sit off and defend more compactly, something they did well in Saturday’s scoreless draw with Sydney FC.

With Carrusca instructed to move high alongside Guardiola, and the wide players dropping back next to Holland and Isaias in midfield, Adelaide’s shape became a 4-4-2. The front two focused on blocking passes into Sydney’s dynamic midfield duo, in turn blunting the supply to the league’s statistically best attack.

This is similar to how Amor initially set up his side last season. It may be that he waits for the physical conditioning to improve before implementing the more aggressive pressing, as it can be physically demanding to repeat it at a high intensity week in, week out in the heat of the Australian summer.

That again bodes well for Adelaide, as it suggests Amor knows how to play the long game over the course of the season.

Perhaps Adelaide fans should not be worried that they currently sit bottom. In a 27-game season where the title can be won with a fine run of form that continues into the finals series – exactly how Adelaide won the competition last year – history may just be repeating itself.