The Western Sydney Wanderers seem to experience a squad overhaul every off-season, despite having only been in existence for four years.

In spite of their success as A-League Premiership and Asian Champions League winners, Tony Popovic has had to continually refresh and reformat his side, particularly in attack. The most dramatic transformation occurred last season, when he switched from the direct, high-tempo pressing style that characterised their initial years, to a Spanish-flavoured possession approach based upon fluent build-up play from the back and fluid attacking movement in the final third.

The key figurehead of this stylistic revolution going forward was Mitch Nichols. This season, while there have been inevitable changes in personnel around him, Nichols has been the familiar face. That consistency has paid dividends for both him and his club, as he has gradually become one of the league’s complete playmakers. He is the players that knits the Wanderers attack together.

In spite of the style changes, Popovic has always been devoted to his 4-2-3-1 formation. In the current system, Nichols plays as the #10. However, his role is more complex than that.

The wide players, Nico Martinez and Jumpei Kusukami, are encouraged to drift inside into the pockets, with Nichols instructed to make forward runs into the channels. This serves two purposes: it pushes opposition defences back, creating space between the lines, and it pushes opposition defences wide, creating space between defenders. 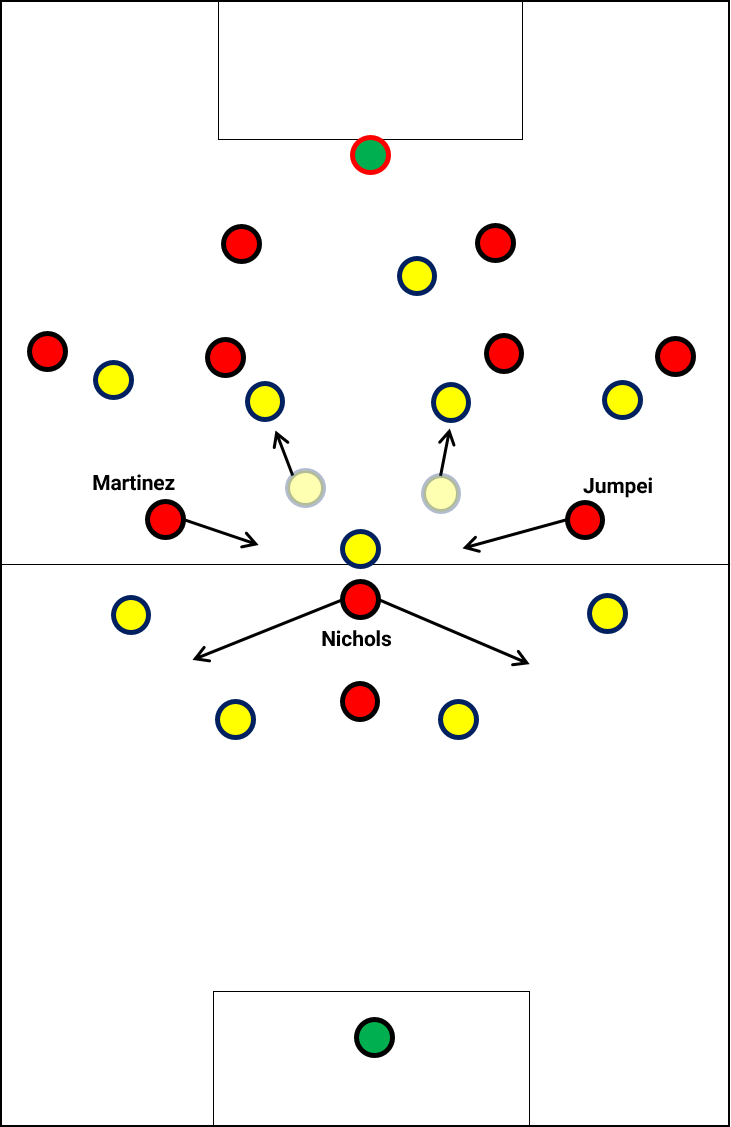 Saturday’s 4-1 win over the Central Coast Mariners was a commanding example of Nichols’ outstanding movement. With Paul Okon setting his side out in a 4-3-3 formation, the Mariners matched up man-for-man against the Wanderers midfield triangle. Okon instructed Blake Powell and George Berry to push forward and press the Wanderers deep midfielders, Dimas and Bruno Pinatores.

However, with Dimas and Bruno dropping into deep positions, drawing their direct opponents up the pitch, this created space to either side of holding midfielder Liam Rose.

This was especially problematic because both Jumpei and Martinez drifted into those zones, with Nichols vacating his position to fill the space created in wider areas by this inverted movement. The Wanderers were able to play through the press, find either of the wingers between the lines, who could then drive forward on the ball or play Nichols in space out wide.

This pattern was most evident and most successful in the build up to their second goal.

Nichols’ movement to get in behind is critical to creating the space for the other attackers to receive passes between the lines. Jumpei and Martinez are the Wanderers equivalent of Milos Ninkovic, Brett Holman and Guilherme Finkler, playmakers who tend to drop deeper, towards the play. Nichols is more similar stylistically to Alex Brosque or James Troisi, in the way he darts forward from a #10 position.

Nichols does score goals, though, boasting great quality from long distances. He was second by a solitary strike behind Brendan Santalab last season in the club’s goalscoring charts, and has recorded more shots than any other his teammates this season.

Goals would be welcome this season, but his teammates appreciate the work he does off the ball to make the side tick. Argentine Martinez was effervescent in his praise, describing Nichols as ‘like a horse in the Melbourne Cup.”

“He runs the 90 minutes, amazing, this guy… He knows what he’s going to do before he receives the ball… he’s a very clever guy with a very good technique, actually, I think he’s a very complete player – and he runs.”

Nichols certainly runs – not only in attack, but also defensively. Popovic places a great emphasis on organised, collective defensive pressure, which Martinez also alludes to. “He allows us freedom to play,” says the Argentine, “but when we don’t have the ball, we have to be in our position, defend, press… that’s what we work on during the week.”

Nichols again is key. Moving up alongside the striker to create a 4-4-2 block, Nichols works with his partner to block passes into central midfield positions and force play wide. Importantly, he leads the pressure, watching for triggers such as a slow pass or a sloppy backwards ball, upon which he moves forward to apply pressure. This is the cue for the entire defensive block to step forward and maintain pressure on the ball – if the Wanderers don’t win it back, they’ll drop back into their block. Nichols is not just the attacking fulcrum; he is also the defensive leader.

That is the benefit of staying and working under Popovic, despite interest from overseas after his good start to last season. Now, Nichols has clearly become the centrepiece of this Wanderers side, and one of the league’s more underappreciated but most talented attackers.