I grew up in the era of the NBA where isolation basketball was at its peak. Stars like Kobe Bryant, Allen Iverson, and Tracy McGrady would hoist up over 20 shots per game over multiple defenders.

Ball movement and putting your teammates in position to succeed? Forget it. It was four guys sitting and watching their teammate go one on two or even one on three.

That is what we all valued and loved to watch.

Fortunately the league evolved. Stars have come into the league that can affect the game in multiple different ways. We have three and D players like Courtney Lee and a few who can do a bit of everything like Nicolas Batum and Kawhi Leonard.

That is what is valued in today’s game, the ability to complement everyone. Those who can’t aren’t highly sought after anymore.

If you’re paying attention to MLB’s free agency you’ll notice a couple of big names still out there in the market like Jose Bautista, Mark Trumbo, and Edwin Encarnacion.

Just like the NBA changed, the MLB is changing as well. It seems power is going out of style and MLB General Managers are placing more emphasis on players who can do several things well just not one.

There was a lot of negative feedback when Jason Heyward signed a eight-year, $US184-million contract with the Cubs. But what GMs are realising is it’s better to pay a good supporting player big money who can do everything and still have the ability to steal the show from time to time than a gaudy home run hitter who strikes out a lot.

Don’t get me wrong, guys like Trumbo and Bautista will still get paid – just not like they would in the mid 2000s when power was everything.

From what it looks like so far this offseason, MLB is evolving and we can thank the NBA for that.

Washington Nationals have defeated Houston Astros 6-2 in the deciding game 7 of the World Series to secure their maiden title.

Some part of me was hoping that these upstarts from Tampa Bay would somehow win Game 5 of their division series against the Houston Astros.

A women's baseball league is coming to Australia

As a Sydney-sider who loves sport, I’m someone who has many favourite sporting teams across a variety of codes. When you ask me who I support, you’ll often get quite a long answer and any possible combination of the Parramatta Eels, GWS Giants, Giants Netball, Sydney Thunder and also the Sydney Blue Sox.

A women's baseball league is coming to Australia

WATCH: Hilarious contender for worst opening pitch of all time

Move over 50 Cent, we might have a new contender for the worst opening pitch of all time.

WATCH: Hilarious contender for worst opening pitch of all time 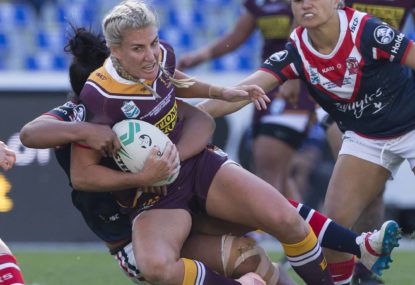