“Honestly, they were looking down on me, just staring blankly,” Warwick says.

“They weren’t interested in what I had to say and I’ll admit I was intimidated.”

As a bloke raised in Bathurst, who spent the majority of his first 50 years either at footy clubs or stuck behind the wheel, Warwick concedes he was sheltered from issues surrounding refugees.

It was purely out of necessity that he approached a group of African basketballers eight years ago.

“The junior club I’m associated with, Blacktown PCYC, had just been banned for two years from signing any kids from existing rugby league clubs in the district,” he says.

“It was quite a handicap and it meant we had to find a heap of kids who were new to the sport in order to field teams.” 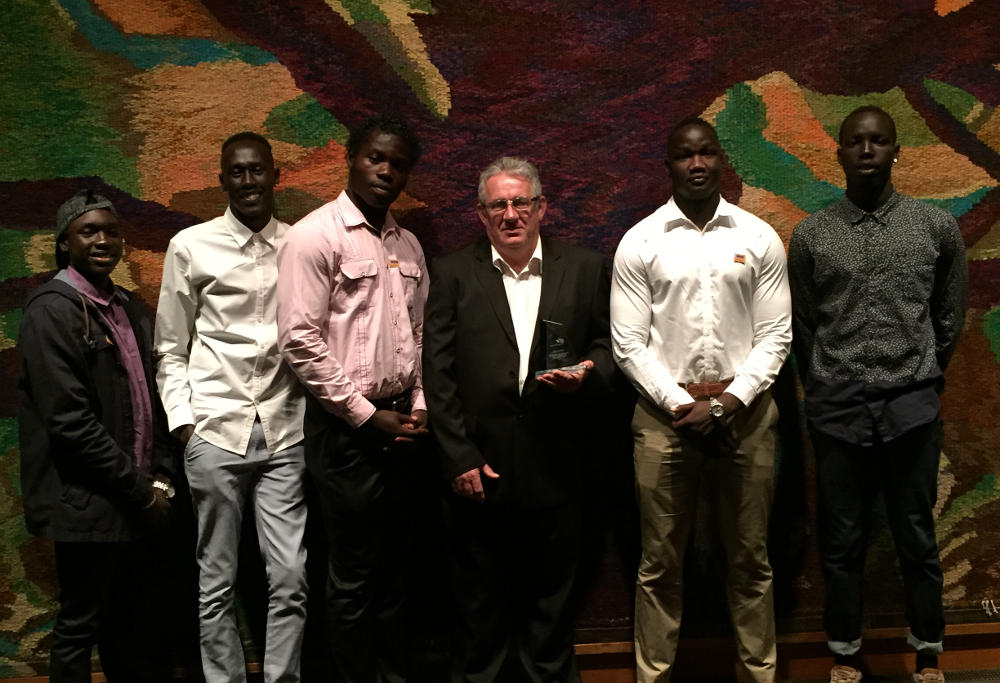 Around the same time, Blacktown City Council had become central to the resettlement of refugees who were escaping atrocious conflicts throughout equatorial Africa.

Warwick recalls the PCYC basketball court was filled with new migrants, while the rugby league outfit was in a desperate state.

His initial approach – and subsequent rebuff – left him deflated, believing the new community had no love for league.

“Then my wife, Cheralie, said to me ‘Don’t give up. Focus on the younger ones, not the bigger ones, and help them integrate into the community,’” Steve reveals.

After the change of approach, there were immediate dividends.

Warwick, who suffers osteoarthritis and emphysema, and has a stent in his heart, recalls driving the club bus to pick up one interested African boy from a block of apartments.

When he arrived, eight kids jumped into the bus. As he drove off, a father hailed him down and put another child inside.

It was the start of a journey that has helped change the face of rugby league in Australia. 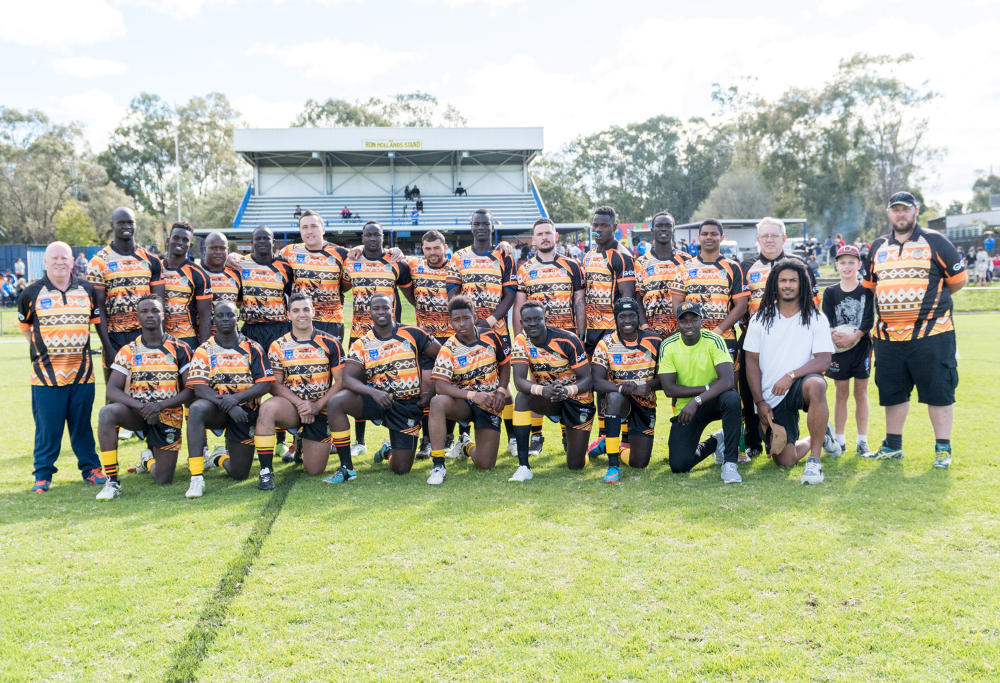 Look around the fringes of the NRL and junior ranks in 2016 and you’ll have seen an African explosion.

There are kids with names like ‘Pacific’, ‘Prince’ and ‘Praise’, bringing as much colour from their upbringings as their kaleidoscopic jerseys.

Among the most famous is Wests Tigers’ Obed Karwhin, a native of Ivory Coast, who walked one month through jungle to escape war in his homeland and was later mentored by Warwick.

Bulldogs under 20s player Jayden Okunbar and Parramatta’s Fairouz Elkander are others to have been given guidance by Warwick in their formative years.

Elsewhere you have Ghana’s Yaw Kiti Glymin on the wing for St George Illawarra and South Sudan’s Chol Chol signing for the Melbourne Storm.

Historically, it’s hard to go past Nigerian descendant Martin Offiah as the most famous player of African heritage, while Moses Mbye and Jamal Idris have been the NRL’s most feted players of African extraction.

But while these players were considered unique in the past, evidence suggests Africans playing top grade rugby league will cease to be an exception.

“In 2012 we started the representative team Africa United, which brings together all the different nationalities,” says 58-year-old Warwick.

“Of course some players are from Blacktown PCYC, but now we have guys from Newcastle, western New South Wales and Queensland.

“It’s hard for us financially, as we don’t have much backing and a lot of the families arrive here with very little, but the players are extremely coachable… they want to learn. 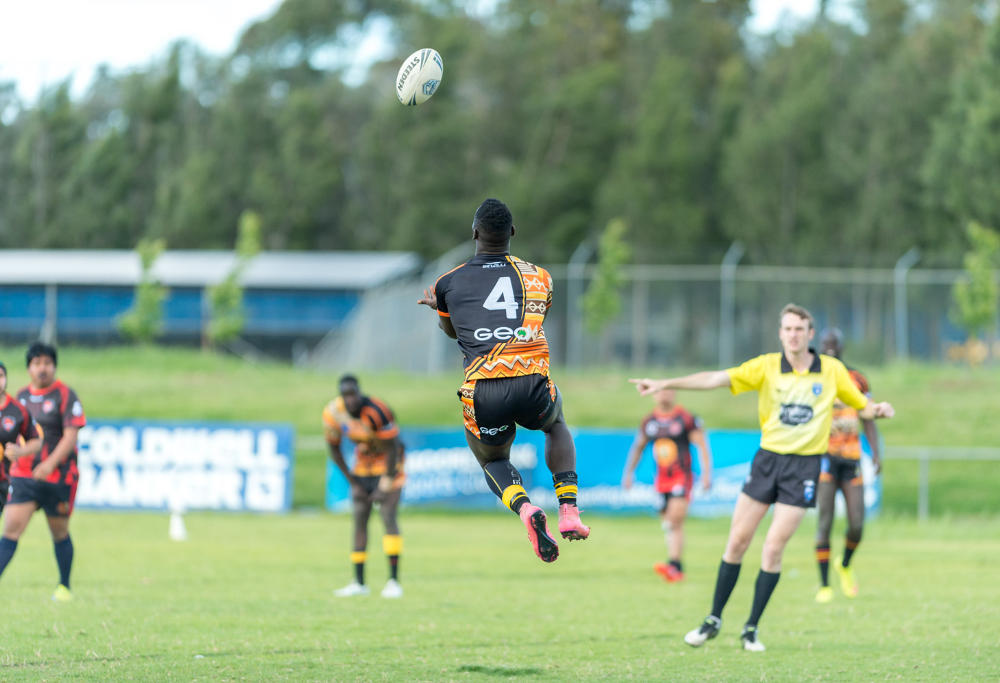 “If we have a tournament, the players from rural areas will arrive a few weeks early and stay with family members. That’s how serious they take it.”

Loyalty to the group and sense of pride is such that a number of dual-heritage players spurned the opportunity to play for South Africa in World Cup qualifiers.

Though Africa United, as a composite team, cannot qualify for a top-tier World Cup, some players feel it better represents where they come from.

Teenagers Daniel Dut and Obonno Obonno, from Caboolture, north of Brisbane, are even in the process of forming a team that will be entirely comprised players from South Sudan.

So far they have enough players in under 18s to stand alone, and enough senior players from combined nations to form a Queensland chapter of Africa United in the coming year.

“I left South Sudan when I was two and we had to travel north over two borders and spend four years in Egypt because that’s where the United Nations processing office is,” says Dut.

“I can tell you, they don’t really like black people in Egypt.

“But my parents said we had to get out of South Sudan because the police were corrupt and always raiding the neighbourhood. We would have been killed or arrested.”

Now studying a diploma of business, Daniel said he thought he and Obonno were the only Africans playing rugby league, until he saw a Facebook post from Africa United.

Indeed, Warwick’s groundwork in 2008 has paved the way for the unification of a community, one that now has far more binding it than a troubled past. 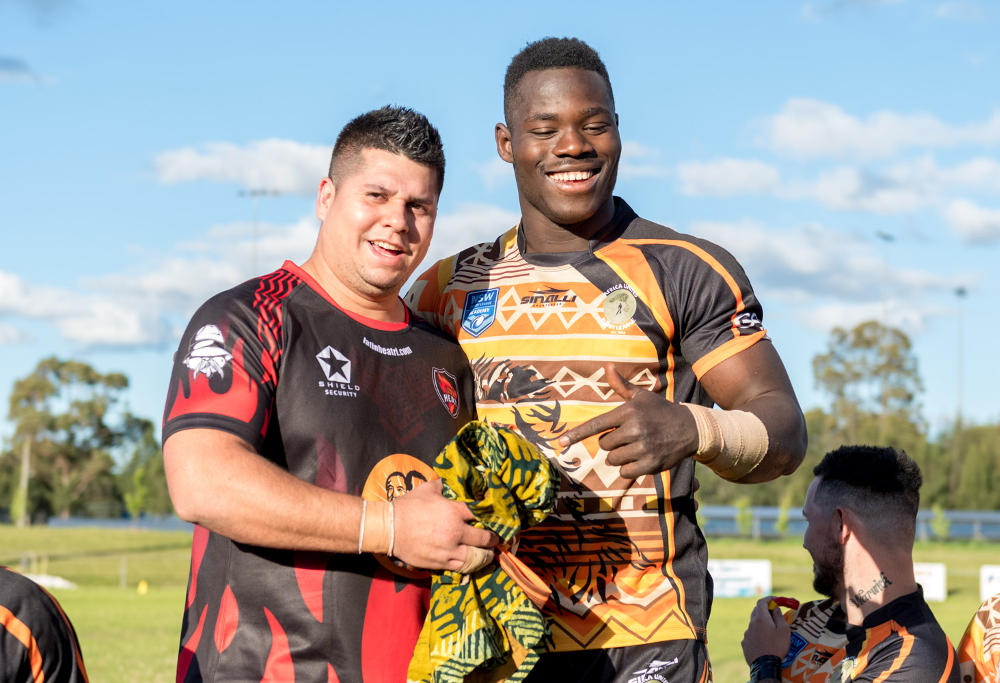 “I’ve got a real soft spot for these kids, as does my wife,” says Warwick, winner of multiple awards for community service.

“There is one kid, Darlington, who my wife used to give a Mars bar to every time he scored.

“He started at age four and now he’s 11, still coming to collect his Mars bars.

“A lot of these kids have horrible memories – where everyone was shot – but we listen to them and give them an outlet.

“And it’s made me a lot more aware of what’s going on in the world. Immigration is not a subject that can be treated lightly.”