Christmas has come and gone and as another year draws to a close it’s time for one of those year in reflection pieces.

The year has ended pretty much the way it started with the sudden loss of many famous people. Now there’s a near universal consensus that 2016 has really sucked.

But I’m not going to dwell on the gloom and doom. There’s a new year ahead and I’m ending it on a positive note with a look back at the highlights of the men’s UCI season for 2016 as selected by The Roar’s expert panel (err, me).

April – Mathew Hayman conquers the cobbles of Paris-Roubaix
The likes of Fabian Cancellara (Trek-Segafredo) and Peter Sagan (Tinkoff) went into the cobbled classic as favourites only to be upstaged by Aussie Mathew Hayman, a domestique from the team formerly known as Orica Orica-GreenEDGE.

It was a stunning against-all-odds victory considering Hayman broke his arm six weeks before the race and had been confined to a home trainer, hardly the ideal preparation for the ‘Hell of the North’.

It was Hayman’s fifteenth start in the race and he became only the second Australian to win it since Stuart O’Grady in 2007. In July he fulfilled his dream of completing the Tour de France and in November received Australia’s highest cycling accolade the Sir Hubert ‘Oppy’ Opperman medal and trophy.

Hayman’s win was so significant we should name an island after him, but we don’t have to since there already is one. 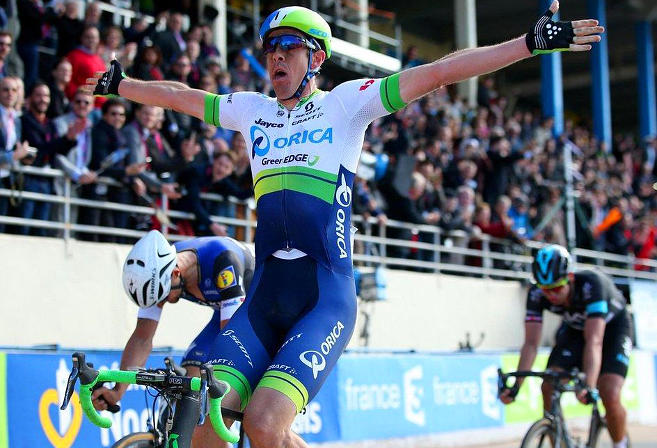 July – Chris Froome, running man
It doesn’t get any bigger in cycling than a Tour de France stage finish on Mont Ventoux on France’s national holiday, Bastille Day. An attack by Chris Froome (Sky), Richie Porte (BMC) and Bauke Mollema (Trek-Segafredo) in the final kilometre was brought to an abrupt end after a crash into the back of a TV moto.

Froome was left with a broken bike and with his spare stuck down the road on the roof of the Sky team car started running, treating the large crowd of fans to an impromptu triathlon.

A Mavic neutral service vehicle came to the rescue with what looked like a kid’s bike. Froome grabbed it and looking like he hadn’t been on a bike in years wobbled awkwardly up the mountain and discarded it for a proper one after the team car caught up with him.

The rest is history. I know there are mixed views about Chris Froome, but after his delivery of pure comedy gold on Mont Ventoux we’ll never consider him boring.

‘GVA’ recovered from a broken collarbone after a crash in the Tour of Flanders to ride in the Tour de France where he won stage five and spent three days in yellow.

In a year of upsets and surprise victories Van Avermaet took home gold for Belgium on a ridiculously tough crash-ridden course in the men’s Olympic road race in Rio.

Van Avermaet finished the year in November in hospital after busting an ankle mountain biking, proving Olympic champions are mere mortals after all.

2016 was a fabulous season for the ‘smiling assassin’ finishing second in the Giro d’Italia in May and took out the Giro dell’Emillia in September. He capped off the UCI World Tour season winning on the tough but beautiful course of Il Lombardia in October, making history as the first Colombian to win an esteemed cycling monument.

In contrast to a disappointing 2015 Spring classics season, Sagan blitzed the field winning the Tour of Flanders and Gent-Wevelgem in the space of a week.

Sagan won the points classification, again, in the Tour de France and after a lengthy drought bagged three stage wins.

He rocked the cycling world in January riding in the Tour de San Luis with hairy legs, portending his intention to compete in the Olympic cross country mountain biking event at Rio. And why not? He was a former junior mountain bike world champion and frankly could win just about anything on two wheels. Sadly, after a strong start he succumbed to a puncture.

Back on the road in October Sagan successfully defended his rainbow jersey world championship title in Doha. At only 26 he seems like a veteran rock star of the sport. Just like Keith Richards, we look forward to many years ahead.

I wish you all a very happy new year!