Cast-offs and youngsters: The Mariners are still a work in progress

This season represents a period of transition for the Central Coast Mariners. Paul Okon is rebuilding from Tony Walmsley’s reign with a squad pieced together by the cast-offs of other A-League clubs combined with several promising but very raw youngsters.

This may seem a harsh indictment on the likes of Jacques Faty, Mickael Tavares and Connor Pain but the reality is very few Mariners players would feature as prominently at other clubs. Hamstrung by budget limitations and two seasons of poor form, Okon has to make do with what he has, in the limited time he has had with the squad.

Results, and the style of play, have marginally improved, but these are the first steps in what is a long-term plan.

Arriving halfway through the pre-season and two months out from the first round, it was always going to be difficult for Okon to imprint his preferred brand of football immediately. It should be no surprise what school Okon subscribes to, having coached at national team level during this current Ange Postecoglou era of proactivity.

Postecoglou himself was part of the decision to appoint Okon. The Socceroos coach said at the time of Okon’s appointment that “I want the level of football here to improve…the more teams we have trying to play good positive football will benefit the game.”

“I’ve worked closely with Paulo for the last few years and he can get his team to play in a certain way in really tough international conditions when you only have limited time.”

The Mariners exhibit clear hallmarks of the Okon, and ‘national’, style of play. In a 4-3-3 formation, they have a clear emphasis on playing from the back to build attacks.

They also defend proactively, pressing teams high up the pitch. While there is a clear difference in quality, speed and execution, stylistically, you can see similarities between Okon and the Socceroos, and with many of the other teams in the A-League and NPL attempting to implement this ‘modern’ approach.

However, where Postecoglou’s Socceroos build up with intent, Okon’s Mariners initially felt very ponderous in possession. Perhaps too keen to satisfy their coach’s reputation, the centre-backs often spent long periods passing across the width of the pitch, albeit deep inside their own half.

Yet even after a heavy defeat to Sydney FC Okon insisted that his team outplayed the league leaders. “I think we were the better side and I challenge anyone to disagree with me,” Okon said. “It’s the way we want to play, to come here and dominate Sydney and play the way we want to. I’m happy with the team.”

Okon was probably simply trying to instil confidence in his young team with these hyperbolic comments, but it also belied his current emphasis on the style of play, rather than results. Even if the process proves challenging, he will persist with this learning process, with faith in its eventual ability to create a possession-dominant, attacking team in the vein of Josep Gombau’s Adelaide United, or Postecoglou’s Brisbane Roar.

However, the Mariners continue to be plagued by issues of both territory, and execution. In their New Year’s Eve clash against Melbourne City, for example, they struggled in the first half to control possession in meaningful areas of the pitch.

Their back four, stretched across the full width of the pitch, with the full-backs moving high and wide and the centre-backs splitting to the edge of the box, moved the ball slowly from side to side in the back third, but struggled to play genuinely penetrating passes into the middle or front third.

Part of the problem lay in the positioning of the full-backs. Often, Michael O’Neill and Scott Galloway received passes from the centre-backs with the opposition winger in front of them. This meant as the full-backs took their first touch, City could press them immediately. As City’s wingers defend from a narrow starting position, this pressure often come from ‘inside’.

This meant the Mariners full-backs could only play straight line passes down the line to the feet of their teammates on the wing. These extremely vertical passes, to Trent Buhagiar and Kwabena Appiah, were easily read by City’s full-backs, who could then intercept or tackle to win the ball back.

This common scenario illustrates the perils of building up through full-backs. Their positioning against the touchline, while helping to make the field as big as possible, restricts the space they have to play in when they receive the ball.

It is often said the touchline is the best defender, because it automatically halves the available area to the player on the ball from 360° to 180°.

By a similar rule of thumb, it is more beneficial to build up through central areas, where the player on the ball has theoretically a 360° field of view. By the design of their 4-3-3 formation, however, the Mariners find it difficult to achieve this. This is because Okon instructs his front three to stay high up the pitch, against the opposition’s last line. The wingers try to go 1v1 against full-backs, and Roy O’Donovan makes runs in behind – he has been caught offside more than any other player this season. 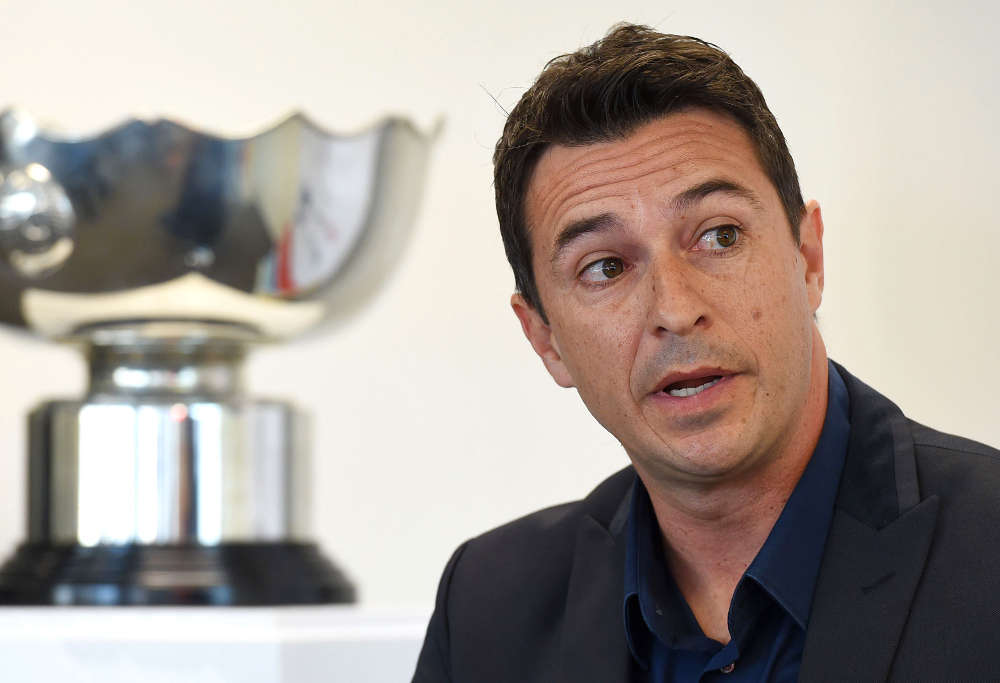 Therefore, the only players occupying central areas are the three midfielders. These are a #6, usually Nick Montgomery, a #8 who drops deep (Adam Berry against Melbourne City) and a #10 who plays high, typically Blake Powell.

Opposition coaches also know that is more effective to force a team to build out wide rather than centrally. Defensive blocks, therefore, focus on restricting space in the middle. Melbourne City do this, as aforementioned, by having the wingers tucking in to block passing lanes centrally. Additionally, in their last game, Van’t Schip instructed Tim Cahill to drop back and occupy Montgomery when the Mariners had the ball.

With Luke Brattan and Anthony Caceres positioned behind Cahill, picking up Powell and Berry, there were very few moments where any Mariners midfielder was able to receive passes facing forward in that congested midfield zone.

This has been a common problem throughout the season. The Mariners understand the first phase of possession play, but struggle to link it to the second, or third phase, which would allow them to consistently and effectively create chances. 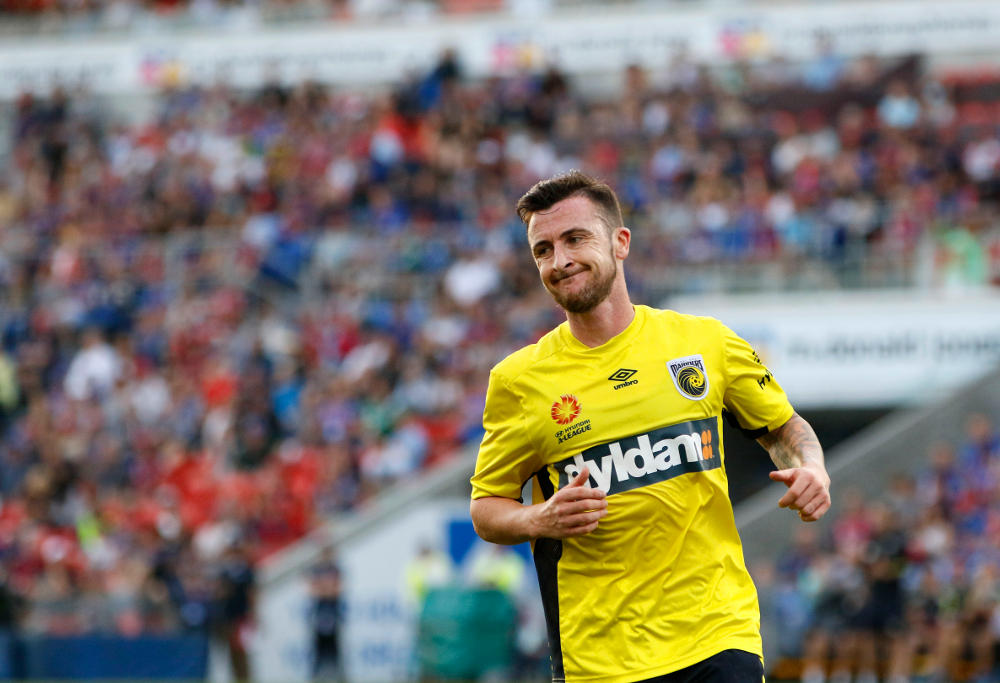 Theoretically, an extra player in that midfield zone could help overload teams that defend man to man. It was telling that in the second half against Melbourne City, when O’Neill began making underlapping runs down the left-hand channel from left-back, that the Mariners made inroads. His forward movement inside – rather than outside – meant a City midfielder had to vacate their man to press him, creating space for a Mariners midfielder in the centre.

Getting players facing forward on the ball in the middle third is a critical component of Okon’s game plan. When a midfielder faces forward in possession, it is the cue for attackers to make forward runs in the final third, creating opportunities for penetration. This can only come about as a result of good build up play that has drawn the opposition up the pitch to press, creating space between the lines.

The Mariners second goal against Melbourne City was actually an excellent example of this. O’Neill receives a lofted pass from the goalkeeper in the inside-left channel. Luke Brattan shifts across to press, creating space inside for Berry to receive facing forward.

As he does, Connor Pain drifts wider on the outside-right, and receives a cross-field switch. This gives Buhagiar the opportunity to make a forward run in behind from the #10 position, receiving in behind the defence. He squares for Roy O’Donovan to tap home.

It’s a simple goal that goes from back to front in four passes, and encapsulates the Okon philosophy. Tellingly, though, it came in a period of frantic end-to-end play, when both teams began to tire and the pressure on the ball significantly dipped.

When City defended solidly throughout the first half, the Mariners did not come close to creating anything similar. The challenge is to consistently produce these types of passages against organised defences.

The bare framework is in place, but more work is required for Okon to continue to build this fledgling Mariners team in his preferred image.