Rose Bowl 2017: The real grandaddy of them all

The Rose Bowl always brings out the best in the teams playing – but this year was extra special.

To start, the Penn State Nittany Lions (PSU) won the coin toss, elected to receive only to have the University of Southern California Trojans (USC) make a fantastic tackle within the five-yard line.

Remember when Jarryd Hayne muffed his first in season punt return? That happened on the game’s kickoff, but the receiver was lucky enough to recover the ball.

But that was not enough for USC whose defence forced an interception on PSU’s first offensive play.

However, the Trojans were cold and went three and out off missing out on a missed 51-yard field goal.

With control of the ball for a second time, the Nittany Lions attempted another series of attempts only to get intercepted yet again. USC’s defence had again provided its offense an opportunity to open the floodgates and all of this happened within just the first few minutes of the game.

The Trojan offense did and finally after 13 unanswered points from a touchdown and two field goals, PSU landed its first punch for seven points.

Prior to this, it had looked like the Nittany Lions showed up with semi-autos to a full-auto firefight but this was where things were about to heat up. After seconds, they started to show poise and confidence while advancing the ball where they scored their first touchdown. USC responded with another seven points of their own within just four plays.

PSU did it again with another touchdown in four plays but USC would not take this lightly and scored again.

With the score now at 27-14 and time running down in the first half, the Nittany Lions needed to make a play, in a strong but arduous effort, they began to march down the field. Without once getting a distance of less than five yards on each down, they dug in their heels and proceeded down the field.

After using a time out and receiving the benefit of a face-mask penalty, scored and converted the PAT to bring the game into one touchdown of each other.

With time to spare, USC flew down the field. Nonetheless, they were unable to make it into the end zone and opted for what turned up to be a second missed field goal. Though still winning, there was an air of disappointment in leaving the field with six missed points along with other opportunities.

Part of the enjoyment of the college code of American football is watching each school’s marching band and, fortunately, watching from Australia, ESPN used some of what would have been commercial airtime for the television viewing audience. If they are serious, in bringing a strong college football culture to Australia in a meaningful way, this part of the culture must be present whether it is live at the ANZ Stadium at Olympic park with Cal versus Hawaii or on TV.

At this point, the real question is which of the two second-half teams would come out victoriously. 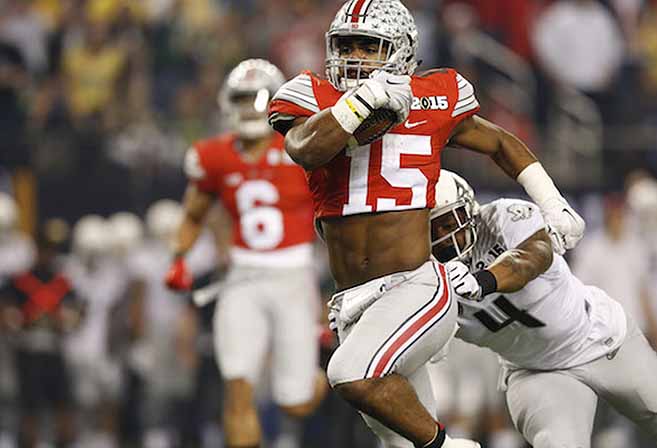 For the first time in the game, USC would call on its Australian football-raised, Melbourne native to punt the ball away. After a lacklustre three and out, seeing #36 Chris Tilby boot the ball 45 yards at least gives some redemption to a Trojan team that just stalled on its first series of the second half. But it was not enough.

Penn laid out a brutal run in one play for a touchdown to tie the score and then take a one-point lead from the point after.

At this point, USC supporters were probably starting to feel a massively depressing case of déjà vu creeping back from the 2006 Rose Bowl loss against Texas ten years earlier.

Yet, from an international sports perspective, what is especially interesting is that referee Kevin Stine addressed the crowd after a thrown yellow flag before the PAT saying that PSU turned down the penalty and that the “TRY”, not touchdown, was good. Starting a few years ago and prior to this, NFL and NCAA commentators had been calling PATs tries inconsistently with both rugby union and rugby league terminology.

This could is very significant for the game going forward but, at the moment, Penn State fans are feeling adrenaline while Trojan supporters are trying to get their heart back out of their stomachs.

The feeling was real. USC’s motor had stalled again and Penn State now scored one touchdown off a punt return and, after a paltry two yard run by Juju Smith-Schuster, made an interception by Brandon Bell that was then turned into yet another touchdown.

Penn State had now scored 28 unanswered points leaving the score at 42-27 in the third quarter.

USC continued to flounder but a little luck in measurements and beating the chain gang, Sam Darnald made a fantastic scoring pass to Smith-Schuster and then proceeded to score a cleverly designed two-point conversion to bring the game to in a one score game.

The shootout was back on and Penn was dominating but only by 42-35 and Saquaon Barkley continued to lead the way with Trace McSorley providing the passes to do so.

But that wasn’t enough. Both inconsistent refereeing and fouls were eating away at the Trojans. Two personal fouls against them in one drive, including the ejection of linebacker Cameron Smith for targeting did not help the cause.

Though ejecting him was the correct call by the letter of the law, the contact was minimal and nothing like the 1989 AFL grand final where Mark Yeates targeted and hit Dermott Brereton so hard that it caused broken ribs and a bruised kidney. Here, McSorley got up nearly as fast as the yellow flag flew and then through another well planned touchdown.

Down again by two touchdowns, USC received the kickoff only to lose top defensive back Adoree’ Jackson and then receive a huge hit on Deontay Burnett. USC now found itself against the ropes and after a six-yard gain, Darnald ended up not fumbling the ball only by luck that his knees were down. This still led to an, albeit, booming 54-yard punt by Tilby back to PSU.

And thus began the fourth quarter with PSU taking control but only to have defensive end Porter Gustin cause a fumble with defensive tackle Stevie Tu’ikolovatu recover for the Trojans. However, after review, the call was overturned in what felt like a 2006 Rose Bowl flashback where Vince Young’s knees were down.

However, it was not meant to be. Sam Darnald, on a play where targeting should have been called against PSU, aired the ball out with reckless abandon and luckily after the ball had been tapped, made it into the hand of Smith-Schuster.

With eight minutes to go, USC was still down and barely edged out a one yard run followed by a piece of aerial beauty that was originally ruled a catch out of bounds. Luckily for the Trojans, the officials changed their mind and the accurate perfectly parabolic pass Darnald to Smith-Schuster was awarded and followed by another running touchdown bringing the score to 49-42.

This is where USC’s Michael Hutchins stepped in making a huge tackle for a Penn State loss of yardage but would his team be able to effectively receive the punt return with Adoree’ Jackson now out for the game? It did not matter with PSU over-kicking the ball for a touchback.

It is times like this that a person starts to feel queasy and there is a high likeliness that both sides were feeling. For USC, the ball was now in their hands and it was a matter of execution. For Penn State, it was now a matter of containing the opposition.

Within 39 seconds and one minute 20 seconds to go, USC scored a massive touchdown with a fantastic pass and with the PAT, it looked like the game was going into overtime.

This game, with all of its ebbs and flows represents the true gun-slinging shootout nature that every football fan wants to be entertained by. It is the proverbial standoff that after just under 60 minutes, the score is tied. Now it comes down to the fates. With the score tied, it feels like both teams are starting off at nil to nil except for the momentum that has been building.

Just as #22 Leon McQuay III has the ball in his hands for an interception, the immortal words of Lee Corso seem to come through as if by prophecy saying, “and that’s why that boy’s on defence and not offense.” Yet this was temporary and with a huge effort, McCuay gave all he had for second effort, making the pick, and returning it to PSU’s 32-yard line. It just goes to show that even in what is now the highest scoring Rose Bowl in history, the best offense is a good defence.

With seconds ticking away and the Nittany Lions out of time outs, USC then advanced the ball one last time and, with complete faith in their kicker who had already missed from 51 and 49 yards, ran the clock down to five seconds.

ESPN and its commentators use the time in this timeout to remind of Boermeester’s misses as we wait for a 46 yard attempt.

And just like that, all faith is been restored and the kicker is it sales through the middle of the field goal post in the clock ticks zero. USC wins 52 to 49.

The Tennessee Titans have defeated the New Orleans Saints by two points in a game that came right down to the end.