Forget the manager, Brisbane have the clearest identity in the A-League

There is no right or wrong way to play football, but it is near-unanimous that Ange Postecoglou’s Brisbane Roar had an attractive style of play.

His successful Brisbane Roar team, which won two A-League Championships and holds the record for the longest unbeaten streak, had a clear, distinct philosophy.

Five years on from that groundbreaking era, John Aloisi has forged a new identity for Brisbane. There is no right or wrong way to play football, but it is intriguing to see how Brisbane have become more pragmatic over the years, while still retaining core elements of the Postecoglou style.

Postecoglou himself described the vision he brought to the Roar as extremely possession-based in his biography, Changing the Game: “The start of the process was just drumming into the Brisbane players that this was not about winning and losing,” he writes.

“Scoring goals wasn’t even our main objective; it was keeping the ball. The mantra was unflinching and eventually it permeated all the players. It became a shared obsession.”

Postecoglou’s own words sum up Brisbane’s playing style between 2010-12.

The Roar’s possession dominance began with build up play from the goalkeeper, with the centre-backs splitting and the full-backs moving high and wide. Goalkeeper Michael Theo was constantly involved as Brisbane moved the ball from side to side, looking for gaps to penetrate the opposition or else simply continuing to circulate possession until the defensive block opened up.

To create time and space further forward, Brisbane often utilised midfield rotations. These involved the lone holding midfielder (or #6) Erik Paartalu and the two advanced midfielders (or #8s), typically Matt McKay and Massimo Murdocca. Rotations involve players moving from their starting positional slots into new areas of the pitch, either to drag an opposition player away from a certain zone or to allow a teammate to move into the previously occupied position. 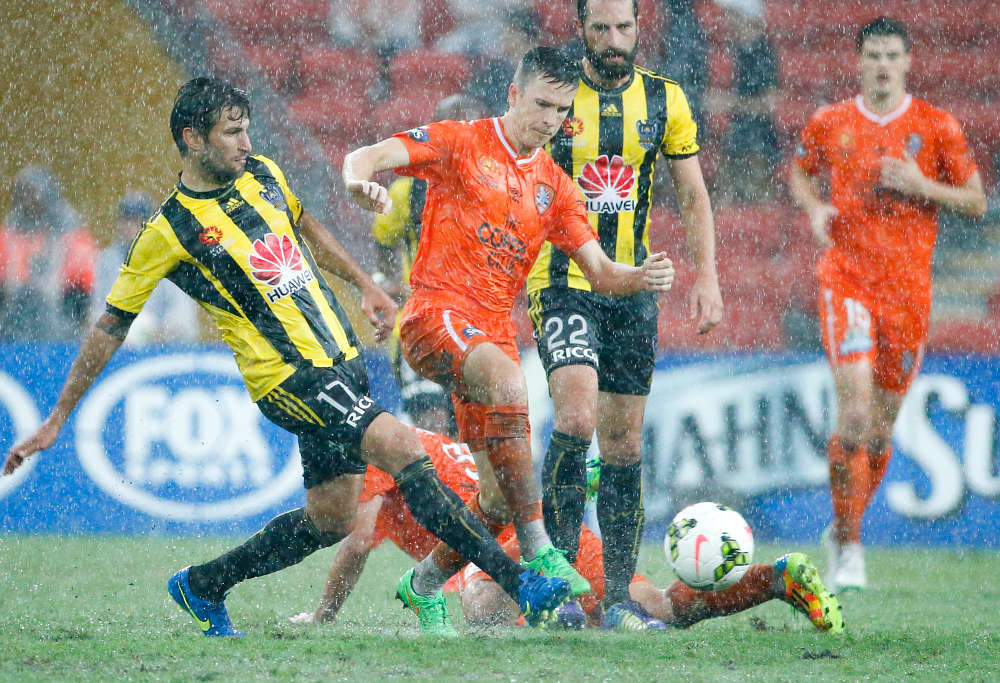 One example of this is the rotation of the No. 8s into wide positions when the centre-backs have possession. This rotation allowed the fullbacks to move further up the pitch (as the midfielder had moved into their zone), which in turn freed up the winger to drift slightly inside. In theory, if the opposition central midfielder followed his direct opponent into the wide area, this opened up a passing lane between the centre-back on the ball and the winger who has moved inside.

Another rotation Brisbane utilised was a vertical ‘dropping’ movement from the No.6, Paartalu, in between the two centre-backs, creating a temporary back three. By vacating the space in the holding midfield zone, Paartalu would either draw an opposition player away from the central area of the pitch – which could then theoretically be occupied a teammate for them to be able to receive in time and space – or alternatively, allow Paartalu himself to receive the ball in time and space at the back, where he could then pick out teammates higher up the pitch with long diagonal passes, or drive into space on the ball.

Positional rotations require cohesion and chemistry between teammates, but with Postecoglou’s team all firmly on board with the new mantra, they were always able to manipulate opposition defensive structures to create crucial pockets of space to play penetrating forward passes into. That was the cutting edge of their possession obsession.

The formation is the most obvious change, with Aloisi firmly committed to a 4-2-3-1 system. What is most interesting, however, is that Brisbane now alternate between approaches.

Throughout his tenure, there have been games where he instructs the side to sit quite deep. The wide players drop back alongside the midfield, creating a 4-4-2 block. When winning the ball, they play forward quickly, trying to take advantage of the pace of Jamie Maclaren in behind. This counter-attacking style was particularly useful, for example, in a crucial 1-0 win over Melbourne City earlier this season.

However, they still retain many elements of the possession style. The build up is methodical, with many of the previous rotations still utilised. For example in their last game – against Newcastle Jets, a 3-2 defeat – one of the two deep central midfielders would often drop goal-side of Newcastle’s first-pressing line (a front two). This created a three vs two overload at the back that then enabled a Brisbane centre-back to have space to play a forward diagonal pass to the feet of a full-back positioned wide. When this occurred, the other Roar central midfielder would move forward into a line of pass with the full-back.

This was important, because the Jets pressed in a 4-4-2. Their near-side striker would move up the pitch to prevent a backpass from the full-back to centre-back, while the near-side winger would move out to press the full-back on the ball. If the Roar midfielder positioned himself well – which Thomas McKay and McKay and Thomas Kristensen often did – he could receive a simple pass inside from the full-back, cutting the Jets’ pressing striker and winger out of the play.

Brisbane also performed rotations further up the pitch. A core tenet of an effective possession playing style is having players positioned between the opposition lines of midfield and defence. Aloisi encourages the three attackers behind striker Maclaren to interchange in order to find this space. Against the Jets, they had a clear asymmetrical pattern to achieve this.

Thomsa Broich, on the right, stayed very wide. Dimitri Petratos, playing centrally, positioned slightly right of centre, and made little forward movements towards the right to drag away one of the Jets’ holding midfielder. This allowed Tommy Oar, from the left, to drift very far infield to practically become a second No.10. He received a number of passes in space in that dangerous pocket of space between the lines, where he often took shots from outside the penalty box. It was from this position he scored the opening goal.

There is no right or wrong way to play football, and while some may debate the effectiveness of Aloisi’s approach, it is intriguing to see how the coach has built on the platform of Postecoglou’s philosophy, combined with the more pragmatic bent of his predecessors, to create this well-organised unit, both with and without the ball.

There has been an evolution in the exact nature of the philosophy, but Brisbane still have one of the league’s clearest identities in how they play.