Do we really want to go to India?

The euphoria surrounding the Australian Test team’s 3-0 whitewash of Pakistan, should be placed into perspective.

The Pakistanis arrived in Brisbane, to play the first Test, in mid-December, direct from a 3-0 flogging at the hands of the Test team from the land of the long white cloud.

Over the years, Pakistan’s travelling Test record to countries south of the Equator is deplorable.

The Pakistan side, plagued by political strife at home, whose morale is at an all time low were very unlucky not to pull off a miraculous first Test win, against Australia, going down by a mere 39 runs after a magnificent run chase.

What may have occurred over the rest of the series if Pakistan had got up to win that first Test from an impossible position?

It would have been just what the doctor ordered to kick-start their Aussie tour. Alas, it didn’t happen.

Looking at Australia’s Test performances during 2016 represents less than exciting reading.
After a draw with the West Indies, at Sydney, in January, they comprehensively defeated New Zealand, away, 2-0 in February. Results by an innings and 52 runs and 7 wickets indicated the difference between the two teams.

These victories were counter-balanced by an underwhelming performance in Sri Lanka, going down to the host nation 3-0 and showing an inability to handle sub-continent conditions.

Outstanding examples of this were David Warner and Usman Khawaja.

Back in Australia, the floggings continued, with South Africa stitching up the series after big victories in Perth and the embarrassment of an innings and 80-run loss by the Aussies in Hobart.

Sure, the Aussies got up and won the dead rubber Test in Adelaide, but the damage had been done.

Australia, having escaped defeat by a cat’s whisker in Brisbane, went on and claimed a clean sweep against Pakistan. So they should have!

Surely it should have been expected that the Aussies would take care of Pakistan, on their home decks.

The upcoming tour of India is a huge challenge for Australia, particularly with the recent failures in Sri Lanka.

The Indian captain was left in disbelief after the third umpire ruled that he hadn’t got an inside edge in time. 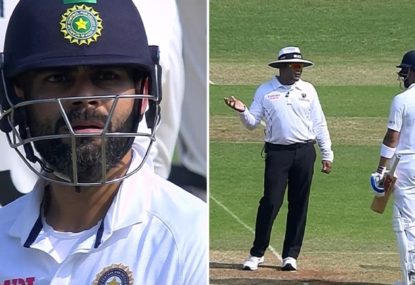