The key to breaking down Sydney FC's remarkable defence

Saturday night’s 0-0 stalemate in the Sydney Derby was the Western Sydney Wanderers’ first clean sheet of the season, which was the biggest positive from the match for coach Tony Popovic.

By contrast, though, it was the seventh clean sheet in this campaign for their neighbours in Sky Blue. Keeping their opponents scoreless was a breakthrough moment for the Wanderers; a run-of-the-mill event for Graham Arnold’s team.

Sydney’s defensive record this season is astonishing. They have conceded just seven goals in fifteen games. In the FFA Cup, they were breached only once (in the final against Melbourne City). They average just three shots conceded per game, easily the lowest in the league. So how do you score against such a mean, stingy defence?

Sydney’s defensive strategy can be broken down into two broad components. The first is their ability to press opponents high up the pitch, something Arnold constantly applauds when saying “our defence starts from the front.”

Sydney play a 4-2-3-1 formation that becomes a 4-4-2 without the ball. The front two, Alex Brosque and Bobo, form the first pressing line. Their exact starting position varies, but it is typically around the opposition’s deepest midfield player, as Sydney’s first priority defensively is to stop teams progressing the ball through central areas.

Depending on their overall tactics for a match, this first pressing line might be higher or deeper. However, the key principle – that the front two form the first line of defence, and position to force passes from the back wide – is always consistent.

To ensure the side has great horizontal compactness, the wide players, Filip Holosko and Milos Ninkovic, drop back into a position between the front two and the two central midfielders, blocking the passing lane into opposition midfielders. Often, this means they must leave the pass from opposition centre-back to full-back free and open – which is fine, because it fits into Sydney’s focus on forcing opponents wide when building up from the back.

Importantly, however, if the opposition does play a pass into the feet of a full-back, Sydney’s wingers spring into life. They press the ball aggressively, looking to force a backwards pass.

When this occurs, the entire defensive block moves forward collectively, lead by Brosque and Bobo. Sydney are unrelenting when teams pass backwards, with Brosque tireless in his efforts to maintain pressure on the ball.

Sydney will often press high based on a number of ‘triggers’ – including, but not limited to, backwards passes, poor first touches or poor passes. Regardless of the trigger, the resulting press is always collective. This means as the first pressing line moves forward, so does the rest of the defensive block, ensuring pressure on the ball is always consistent, and minimal space is conceded between the lines.

Beating this press is the first challenge of breaking down Sydney defensively. Several teams have tried in vain this season, to varying success. An interesting example was in the Sydney Derby. Popovic instructed Kearyn Baccus, one of two deep midfielders, to position himself in between Bobo and Brosque, in an attempt to separate the front two.

If Baccus could receive the ball between the two Sydney players and dribble forward, he could remove Sydney’s press from the equation, and give the Wanderers a chance to progress forward into the final third while still being in control of possession. 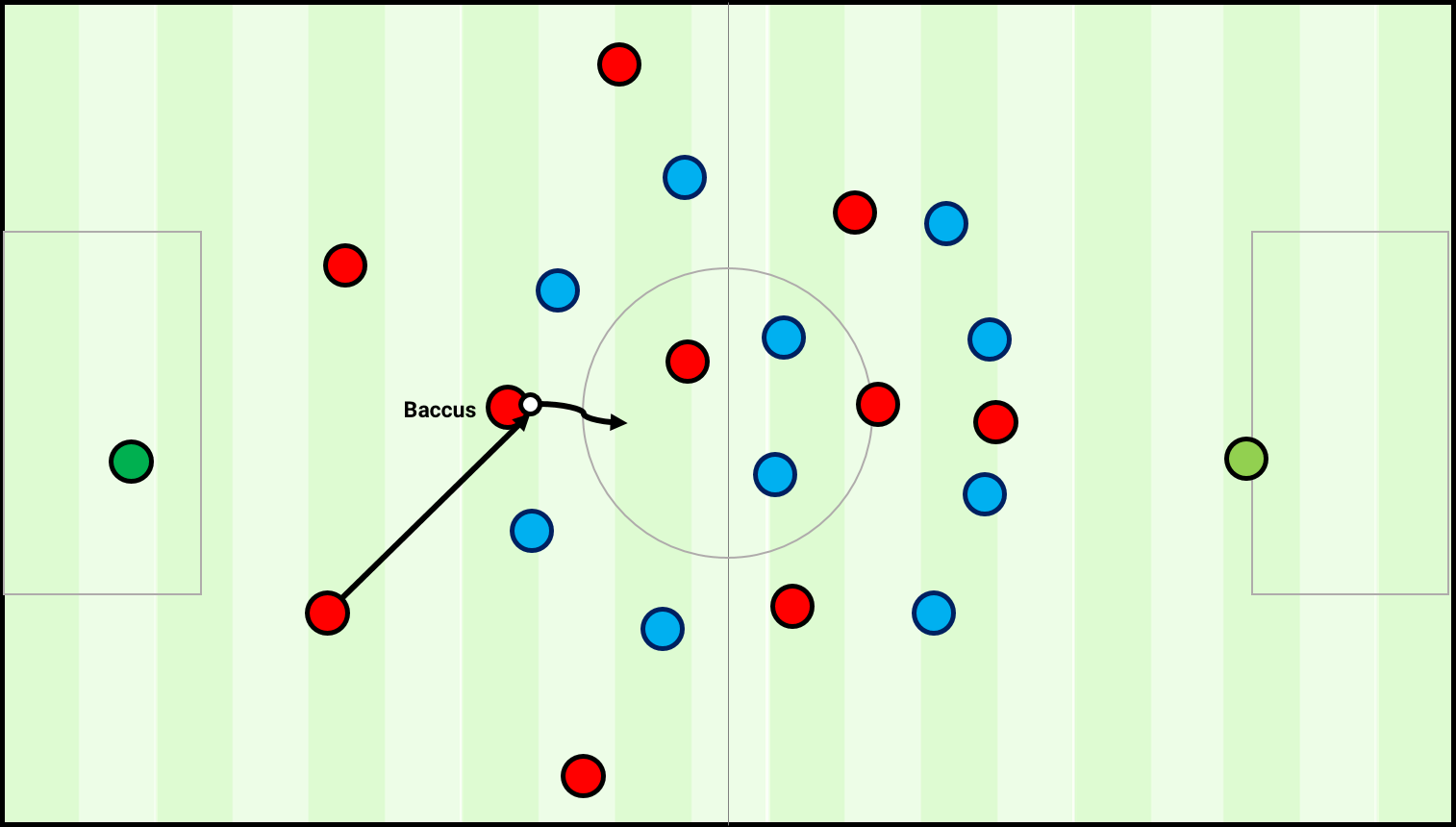 The problem is, even if you get into the middle third, the second component of Sydney’s defensive strategy is equally formidable. When teams have control of the ball inside the middle or front third, the wide players drop back alongside the central midfielders, and the front two drop goal side of the ball. This creates a solid defensive block.

Crucially, the defensive effort is still collective. If the ball shifts wide, the whole team shifts with it. If a central midfielder steps forward to close down an opponent, the players behind him squeeze horizontally and reduce the space. It is an extremely well-oiled machine.

This has been a hallmark of Arnold’s teams, including the 2012 Championship-winning Central Coast Mariners. Interestingly, however, this current Sydney team is more aggressive in trying to win the ball back. For example, Arnold encourages the full-backs to step up quickly to try and intercept passes into opposition wingers.

This was obvious in the Derby, when Rhyan Grant ran into some trouble with the referee when trying to rob Jaushua Sotirio of the ball from behind. While Grant has defended well in this manner throughout the season, it is a possible route of attack for opponents.

Drawing the Sydney full-backs up the pitch can create attacking possibilities elsewhere. Typically, if the full-back is beaten, and the ball progresses into a wide area of the front third, the nearest centre-back will not move out from the middle to pressure the player on the ball.

Rather, this is the responsibility of the nearest central midfielder, who shifts wide. This is because all of Sydney’s centre-backs are very strong in the air. They would prefer to invite aerial crosses into the middle rather than move out wide, risk being exposed in a one-on-one situation and leaving their other centre-back vulnerable in the penalty box.

The trick for Sydney’s opponents then, is to find a way to get in behind the full-back, then resist the temptation to cross into the middle. Rather, they should try and draw the midfielder out wide, then potentially attack the space vacated with a cut-back in front of the centre-backs.

As with all of the best-laid plans, though, this is one that sounds straightforward in theory, but difficult in practice. The real beauty of Sydney’s defensive system is simply how hard every player works. It is a real disciplined, collective effort, in a structured and organised unit.