What a year for Canberra cyclists on the world stage

I started to reflect on the performance of ACT riders after Chloe Hosking’s sensational win on Monday to claim Stage 3 of the women’s Tour Down Under.

This came on the back of Nathan Haas’ third place at the 2017 Road National Championships.

The ACT had always produced and nurtured its fair share of world class riders in the past, including Michael Rogers and Stephen Hodge.

It seems that the Territory’s three letter initials have been splashed across the TV a lot over the last couple of years.

ACT, or Canberra, the nation’s capital is the smallest jurisdiction in Australia (0.03 per cent of the total size) and only has a population of 396,100 (ABS Australian Demographics, June 2016), the second smallest in the country.

How well did ACT riders perform on the world stage in 2016?

Hayman could be defined as the grandfather of Australian cycling. Not a prolific winner of races during the cycling calendar. Rather he has the reputation as a team super-domestique, helping the team leader to win races.

This was the specific role for which Hayman was brought into the Orica-Scott team. But he is also a handy Spring Classics rider.

A broken wrist at the Omloop Het Nieuwsblad race almost put to an end his Spring Classics season. But regular sessions on the wind trainer at home got him to the Paris-Roubaix start line.

Hayman managed to get into a breakaway group of five that included Tom Boonen. Perseverance, experience of doing the race 15 times and outright determination allowed him to hold off Boonen and Stannard in the Velodrome to win the Paris-Roubaix. No mean feet for a 37-year-old rider, let alone one that had a major injury only weeks before.

Hayman ensured that he was the first Orica-Scott rider and first rider from the nation’s capital to lift the iconic cobbled trophy.

Matthews’ short international career has already made him Canberra’s most decorated male rider on the World Tour stage (Michael Rogers may debate this statement). 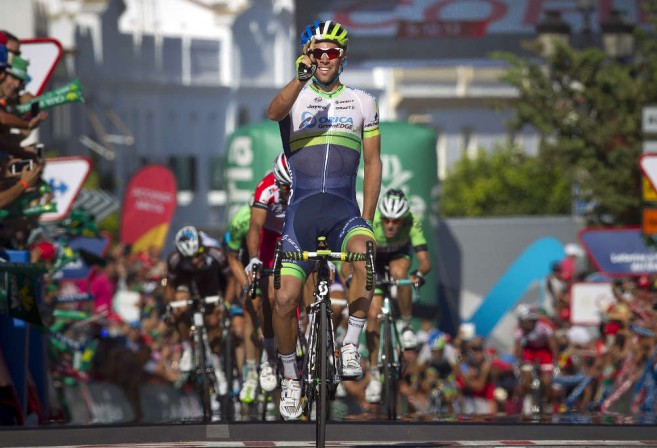 He had won stages in Giro d’Italia, including wearing the fabled pink jersey, and the Vuelta a España, but had never won a stage of the Tour de France.

He was a surprising winner of the prologue in the Paris-Nice beating favourite Tom Dumoulin. He also won Stage 2 after Bouhanni was disqualified. By the end of the race, Matthews also claimed the points classification jersey.

With his contract expiring with Orica-Scott at the end of 2016, rumours were circulating during Le Tour de France that Matthews’ career at Orica-Scott was over. After weeks of conjecture Giant-Alpecin (now Team Sunweb) announced that it signed Matthews on a three year contract.

With Matthews’ career intentions sorted out, he went to the World Road Championships in Doha as one of Australia’s protected riders and one of the favourites on the relatively flat course. Unfortunately, Matthews just missed out on a podium finish coming in fourth behind Sagan.

In a new team Matthews will again be expected to perform at a high level in 2017. In fact, Sunweb with its high expectations and its very ambitious objectives, look out for Matthews to attempt win his first Spring Classic and also take the ‘green jersey’ off Sagan at this year’s Le Tour de France.

Haas’ workman-like attitude ensures that he was the top of the selection queue for Dimension Data.

An early season crash during stage 4 of the Paris-Nice effectively put an end to his spring campaign and out of contention for Dimension Data’s Giro d’Italia team. After recovering from his fall and resetting his season goals, Haas went on to pick up a stage win at the Vuelta a Burgos and two top ten finishes at the one-day World Tour races in Quebec and Montreal. A string of good performances at the Tour de Yorkshire led to him winning the Mountains classification at the Tour. He also picked up a third place on Stage 4 of the Tour of California.

2016 could be described as a breakout year for Haas given his performance throughout the year. During an interview with Cycling News (9 December 2016), Haas indicated that he learned more during the 2016 season riding alongside Edvald Boasson Hagen than he has done in any of his previous seasons as a pro.

He has very much continued with this form into 2017 at the Mitchelton Bay Cycling Classic and the 2017 Australian Road National Championships where a bunch sprint for the minor places saw Haas secure third place and his first podium finish at the Nationals.

His form clear will make him watch for a stage win at the first race of the 2017 World Tour – the Tour Down Under.

Caroline Buchanan had another outstanding year on her BMX and 4-cross mountain bike.

The first big result for Buchanan came when she claimed the elite time trial world title for the second time in her career at the UCI BMX World Championship in Colombia. After winning her sixth world title overall her focus shifted to the BMX world championship title.

Unfortunately for Buchanan, she came in second place to Colombian Mariana Pajón in a hard fought final to win silver. A performance that guaranteed her a spot at the Rio Olympics and a chance to redeem herself from the disappointment of London.

Coming into the Olympics, Buchanan was the second seed and at least a favourite for a medal. However, she crashed during one of the semi-final rounds and did not qualify for the final.

Buchanan did not let the Olympics result ruin her season as a month after Rio, Buchanan won the 4-cross mountain biking World Championship, her fourth rainbow jersey since 2009 and now seventh world title.

“It was a challenge for me to be able to step backup and bring that confidence after what happened in Rio but everyone needs to get back up after defeat and give it their best shot,” Buchanan told Fox Sports.

While Buchanan has not outlined her goals and objectives over the next four years, I am sure the two unsuccessful Olympics games will surely motivate Buchanan to search for that elusive Olympic medal in Tokyo in 2020.

Chloe Hosking would have to be Canberra’s most decorated woman road cyclist.

It started to come together for Hosking in the middle of the season where she won a number of key stages and races, including at the Giro d’Italia Femminile, La Route de France, and the Tour of Chongming Island. But it was her sprint finish at La Course on the Champs Élysées in Paris that turned heads and made her one of the favourites for the 2016 Women’s road world championships in Doha.

All eyes were on Hosking. Not only because she had just won a major race, but she also knew the course in Doha well as earlier in the year she had won Stage 4 of the Ladies Tour of Qatar. The course was pancake flat, and the first time since 2011 that it was one purely for the sprinters.

It did not go exactly to plan for Chloe as she missed out on a podium place in a fast and furious finish, coming in seventh place.

Even though Chloe is still young and has the potential to win on the world stage for many more years, in 2017 she has decided to focus her efforts on her studies. But that does not mean we will not see her on the women’s WorldTour. Hosking has changed team’s to ride with Ale Cipollini.

Rather than riding all the world tour events, her European racing program will be broken up into two racing blocks. When she is not racing, Hosking will be focused on hitting the books and training in the Australian winter.

Wiasak was a late comer to cycling, but that has not stopped her performing with the biggest and the best on the world stage. 2016 was definitely a year to focus on her main goal, the Olympics. And it started well when she came third in the 3000 metre Individual Pursuit at the Australian Championships, a test event for the forthcoming World Championships in London.

Wiasak smashed her opponents to win gold and the rainbow jersey in the 3000 metre Individual Pursuit at the Track World Championships. She also successfully defended her title that she first won 12 months before in Paris, and in doing she kick started Australia’s world track championship campaign.

With the Olympics dream over, Wiasak focused her attention on the National Road Series with her team, High5 Dream Team, to immediate effect. Wiasak won the Amy’s Otway Tour and came fourth in the National Capital Tour, including two stage wins. She rounded out a successful season by winning Canberra’s Tour de Femme.

If you are out on your bike in early January in Canberra you are guaranteed to see Elvin training for the early season races and the National Champs.

First up were the Mitchelton Bay Cycling Classic. After winning stage 1 and coming second on stages 2 and 3, Elvin took out the General Classification at the Cycling Classic.

After two successive years in the green and gold, Elvin could not replicate her early season form to win the national championships in the road race for a third year.

After a couple of minor places on the women’s tour, Elvin won her consecutive Gooik-Geraarsbergen-Gooik race.

Elvin secured a place on the Australian team for the World Championships, but was unable to get onto the podium or help Hosking to a win either.

Henderson exhibited very good early season form in her efforts to qualify for the Olympic games. She won national mountain bike series events in Pemberton (WA), Thredbo (NSW) and Toowoomba before winning the National Championships at Bright. A week later she won the cross-country race at the Oceania Championship in New Zealand.

She carried the early season form into the UCI World Cup series by claiming a third place at the women’s elite cross-country race in Cairns. Henderson was unable to replicate this early season form in other World Cup events or at the Olympics, although she secured a number of top 10 placings.

Sue Powell has had an outstanding cycling career after coming to the sport later in life. She won a gold medal at the 2012 London Paralympics and Gold at the World Championships in both track and road.

The 2017 road cycling World Tour season has just kicked off in Adelaide while other cycling disciplines are also beginning, such as the Australian MTB Series.

It will be hard for ACT riders to replicate the same outstanding results of 2016.

However, they have secured immediate success and they will be looking for more glory throughout the year.

I have not undertaken a full analysis of wins and podium finishes for all Australian riders. However, based on my commentary above, I suspect that ACT riders have truly punched above their weight on the World Tour series and other key event across other cycling disciplines.

ACT has this uncanny knack to produce exceptional cyclists across all disciplines. It is even more amazing given that ACT is such a small jurisdiction. One thing is for sure, Canberra is more than the three P’s – Parliament, Politicians and Politics.