The Pearls are Australia's best. The ARU must support them

Who would have thought a couple of years ago that the Australian Women’s Sevens team, the Pearls, are the nation’s best rugby side going into the 2017 season?

Last year the Wallabies struggled to maintain their top echelon status. The disappointment in this was that a team that competed vigorously throughout an entertaining Rugby World Cup in 2015 failed to kick on (or better, to run on) in the next season.

The unprecedented loss to England 3-0 in a home series meant that the Test season was tainted before the Rugby Championship and the November Tests in Europe.

As for all the Super Rugby teams last year, the hackneyed report card advice “could do better” is about as positive as anyone can hope to be about the dismal results.

Why the ARU high performance unit, along with the board and the chief executive, hasn’t gone public on its dismay about the lacklustre output from the franchises is beyond me.

I have been writing about Australian rugby for over 30 years. This is the first time I have made the following statement: the rugby establishment is sleep-walking the rugby game in Australia to oblivion.

I’ll repeat the statement, with emphasis, in an attempt to somehow jolt a reaction from seemingly moribund officials, at the professional levels of the rugby game (but in the wonderful clubs and schools organisations): the rugby establishment is sleep-walking the rugby game in Australia to oblivion.

This brings us back to the Pearls, the one success story of the ARU in the last few years. 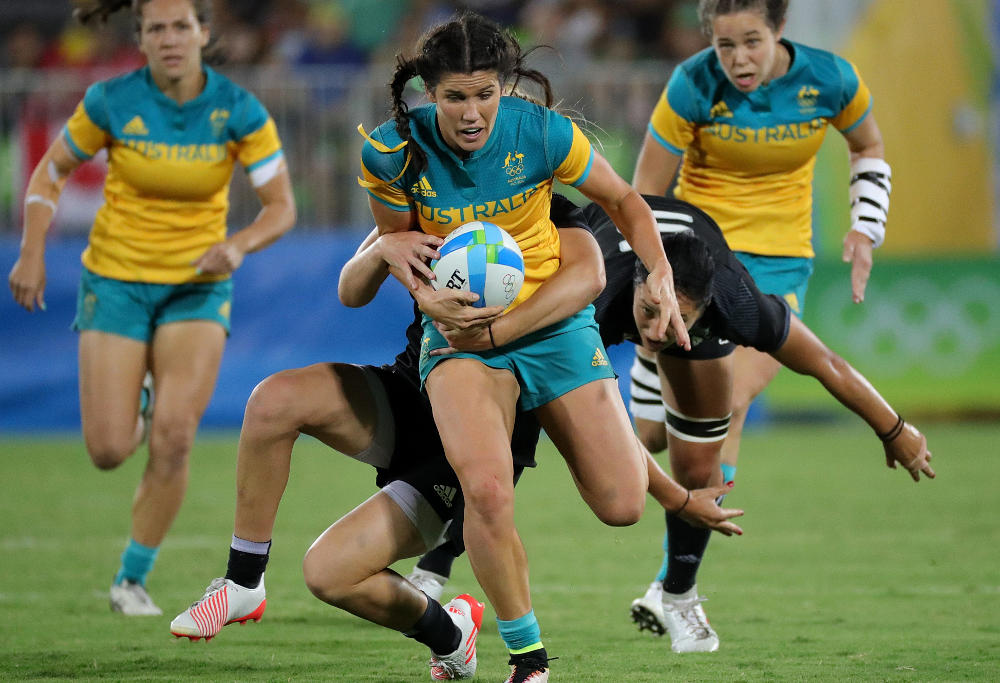 In constructing the Women’s Seven side, the ARU was faced with the difficulty that there were very few female players available and fewer from this small pool of 15-a-side exponents who had the pace, skills, touch with the ball and the aerobic fitness to play Sevens Rugby.

They did a smart thing. They went out and recruited athletes from other sports, touch rugby and athletics for instance, with these Sevens attributes and taught them the rugby laws. Emma Sykes, for instance, a teenager who is expected to be one of the Pearls stars this weekend at the Sydney Sevens, has previously represented Australia in touch football.

I was reminded when this cross-sports selection program was created of how the New York Times some decades ago decided how to select a specialist science writer, for the first time. They had to decide whether they hired a scientist and taught s/he how to be a journalist or teach an excellent journalist some science. The NYT decided on the latter course and this proved to be highly successful.

A similar strategy worked for the ARU with the Pearls. The result was a team of sensational athletes who embraced the physicality of rugby. They were tough in mind and body. They rose splendidly to the occasion to defeat a confident New Zealand Women’s Sevens side and win a second Olympic gold medal for rugby by an Australian team.

The Wallabies won a gold medal for rugby at the London Olympics of 1908. This victory required them to defeat an English county side. The Pearls had to defeat the best women’s sides from around the world. Their Olympic win has been rightly acclaimed as a victory for the ages.

This brings us to the coming weekend and the Sydney Sevens, when the Pearls get their chance to show the locals just how good they are in the first Women’s World Series event to be played in Australia.

Coach Tim Walsh has named a full-strength side. There are eight players in the side from the successful Olympics team. Among them, coming back from injury is the charismatic, Ellis Green, the speedster, the fastest runner in the Women’s Sevens game.

One of the great sights in rugby, women or men, is Green striding down the sideline, plaited pony tails bobbing, a huge smile on her face, sometimes turning around before planting the ball for a try to check out (Bolt-like) how far she had left her opponents behind in her wake.

The Pearls start their campaign on Friday with pool matches against Brazil, Ireland and Fiji.

They will then go on Saturday on to the finals where they are seeded to meet New Zealand in the grand final.

Georgina Robinson in the Sydney Morning Herald has revealed that due to “overflow” scheduling, the Pearls will be playing their quarter-final on Kippax Oval which is a training field outside Allianz Stadium. As this quarter final is a knock-out match, there is the possibility that the sell-out Saturday crowd at Allianz might miss out on seeing the Pearls in action.

However, if the quarter-final is won, the Pearls will go on to play their semi-final at Allianz Stadium around 2 o’clock.

The Pearls are a great success story for Australian rugby and for the ARU. There is, however, a qualifying ‘but’ to this story.

Robinson has reported that the women’s-only matches on Friday ticket sales “have been slow.” The combined day, men and women, on Saturday has been sold out and the mens-only Sunday is virtually a sell-out.

The Pearls, therefore, are what a business person would call a “loss leader.” The team and its coaching staff cost the ARU a lot of money. The compensation for the ARU is that the Pearls will draw more young women into rugby. These women will become mothers and their families will become rugby families.

And so a virtuous circle is created.

It is a circle that embraces Olympic gold, admittedly, but it does nothing to alleviate the crushing financial problems facing the ARU.

At least, though, the Pearls are a successful rugby side. The same cannot be said about the Australian Men’s Sevens side, the Thunderbolts.

Given the history of Australian Sevens sides in the 1980s at the fabulous Hong Kong Sevens especially, the Thunderbolts are a perennial disappointment.

This year they have failed to make the quarter-finals in the last two World Rugby Sevens tournaments at Cape Town and Wellington. The Thunderbolts finished 10th at Wellington.

Before the Wellington failure, coach Andy Friend said he was targeting the Sydney Sevens for his team.

Now, with a rash of injuries to key players at Wellington, Friend is aiming at a quarter-finals which seems heroic given the fact that the Thunderbolts have to win two of their three pools games against New Zealand, Scotland and Papua New Guinea.

One of the aspects about Friend’s side that is exciting is that seven of the Thunderbolts at Sydney will be teenagers and the “veteran” of the group is the 19 year-old Henry Hutchinson.

Last year Hutchinson burst on to the Sevens Rugby scene at the Sydney Sevens in a debut that was as dazzling as that made by James O’Connor at the Hong Kong Sevens.

This year’s O’Connor-Hutchinson shooting star could be Tate McDermott. Friend spotted McDermott at a Sevens Rugby tournament in Darwin. He made an impressive debut at Wellington. Friend says he is going to be kept in the squad “for this tournament in Sydney and beyond.”

I always think that Australian sporting teams are at their best when they look to young talent to move forward from adversity to success.

Given the quality of the opposition, though, I think it will be a major upset if the Thunderbolts get to the quarter-finals.

Given the quality of South Africa (particularly), Fiji, and lesser so with Canada, Kenya, England, Scotland and New Zealand, I would think the Thunderbolts will do well if they improve on their Wellington and Dubai performances.

It is going to be a long time before the Thunderbolts start to rack up the successes achieved in the last year or so by the Pearls.